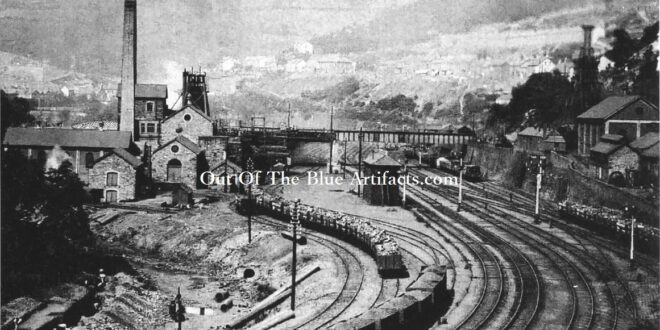 In 1831 Reginald Blewitt became the sole proprietor of the newspaper after the co-owner Mr Charles Hough became bankrupt. 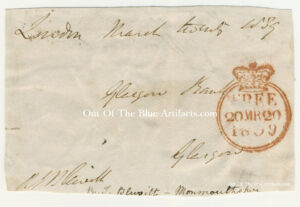 The Monmouthshire Boroughs.
In July 1837 Mr Blewitt was elected to the post of the M.P. for the Monmouthshire Boroughs taking over the post vacated by Sir Benjamin Hall. He defeated the Conservative Mr Crawshay Bailey in the elections by 172 votes to 117. Seen (left) is a Parliamentary Free-Front from the 20th March 1839 signed by Mr Reginald Blewitt.

The Death of Mr R. J. Blewitt.
In 1878 Mr Reginald James Blewitt sadly passed away. Surprisingly there were hardly any news reports or mention of his death in any paper.

Following is a Link to – Mr Reginald James Blewitt – Story.

The Powell Family.
Mr Thomas Powell Snr
Mr Thomas Powell senior was born in 1779, at the Gaer, Newport. Mr Powell started off as a timber merchant at Bassleg, Newport and he later turned his attention towards the mining industry. Mr Thomas Powell became a colliery owner and the largest coal exporter in the coalfield, his sons were Messrs Thomas, Henry and Walter Powell, the latter two brothers later being the owners of the Lanhilleth and Aberbeeg Collieries. At the time of Mr Powell’s death he owned sixteen collieries and employed 6,000 men under the name of the Powell Duffryn Company, in one year it was reported he had exported over 700,000 tons of coal.

After the death of Mr Thomas Powell Snr at the Gaer, Newport, his home was burgled and his will was stolen. Months later, after one of the most intriguing investigations of its type, the burglar was caught and sentenced to twelve years Penal Servitude, this sentence of Penal Servitude replaced the old charge of “Transportation” to Australia. After the will was recovered it was reported that Mr Powell had left £200,000 the equivalent to 23.2 million in today’s money.

In 1869 he took his wife Mrs Julia Powell nee Jenkins aged 31 and their son Master John Powell at just 7 years of age to Africa with a hunting party to shoot elephants, along the way at Abyssinia (Kenya) they encountered a native tribe. There was a hatred towards the British subjects following the recent war in that part of the world and the whole party was massacred except for the servant who had been ill and had followed the party a few days later. The servant after recovering from the illness had found the slaughtered family and sent word back to South Wales of their fate.

In December 1881 he was on one of these experimental flights in a hot-air balloon called “Saladin” with Captain Templar and a close friend by the name of Mr A. Gardner. They took off from Bath, travelled across Somersetshire and Devonshire. After encountering a few problems they tried to land near Bridport in Dorset though had an accident upon landing with which his two co-aviators were thrown out of the carriage, Mr Powell held on to the basket hoping to regain control the balloon but got blown out to sea over the English Channel and was never seen or heard of again.

The Powell Families.
There was no connection between the Powell Duffryn family and the Powell’s Tillery Coal Company family.

Partridge, Jones and John Paton Ltd.
The Partridge, Jones and John Paton Ltd was set up in 1920 to acquire and amalgamate the undertakings of the Partidge Jones & Co and seven other companies. Their industries include the Steel Works at Pontymister, Pontnewynydd Sheet & Galvanising Works. Three Tin-Plate Works at Pontypool and similar works at Caerleon and Machen. Llanerch and Blaenserchan Collieries. Llanhilleth and Navigation Collieries and under the same wing were Hafodyrynys and the Crumlin Valley Collieries.

In October 1936 the company were to expand into the Western Valley, Ebbw Vale and Cwm and also the Eastern Valley.