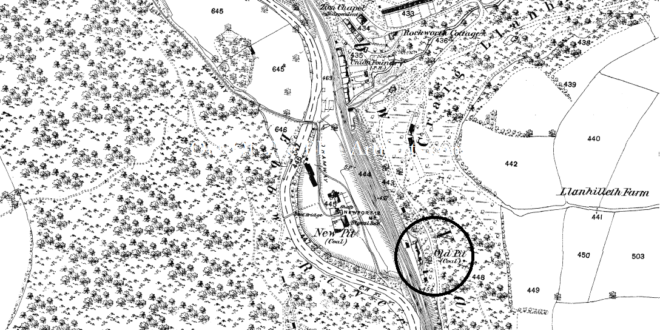 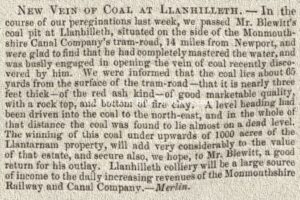 On the 21st July 1847 Mr R. J. Blewitt had a test and exhibition of a new pump at his colliery in Llanhilleth. The pump, called the Adcock’s Spray Pump, designed and built by Mr Henry Adcock C.E. an engineer from Birmingham. It was designed to pump water from mine tunnels and shafts in the progress of being driven or sunk.

Following is a Link to – Mr Reginald James Blewitt – Story.

In the December of 1872 the chimney stack at the Woodfield Colliery, Blackwood, which at the time was the tallest stack that had ever been erected in South Wales was demolished. The Powell brothers purchased the bricks, over 100,000 of them from the stack and also the engine house which was to be utilised at their new colliery at Llanhilleth.

The New Sinkings at the Colliery.
In 1892 the collieries were sunk.

In July 1905 a strike began at Llanhilleth Collieries and lasted nearly 12 months, the strike finally came to an end in July 1906. In the September the out-put was at full production and the manpower was back at 1,400, at this time Mr Theophilus Jones was the manager and Mr William Tudgay was the under-manager.

The Colliery Aerial Ropeway.
In 1913 Partridge Jones & Co erected an aerial flight to take their waste from the colliery at Llanhilleth up over to the mountain top at Trinant.

In 1940 local newspapers advertised for a superintendent at the Llanhilleth Pithead Baths with a wage of £3. 6s. 6d. also with 11s. war-wage. All applicants write to Councillor Mr P. J. Gwillim of 45 Bryn Terrace, Llanhilleth.

The Llanhilleth Pithead Baths were constructed at Horse Shoe Bend, Llanhilleth. After the colliery closed, the main area was demolished and landscaped, the baths building was left intact and it is thought that it is now a listed building although the building was privately purchased and the listing is a little unclear.