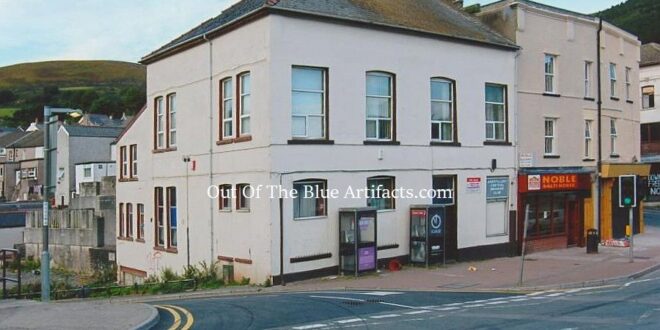 The Liberal Club Abertillery – The Central Snooker Club.
The Individual Successes of the Members of the Liberal Club.
Mr Bryn Gravenor.
Towards the end of the 1930’s Mr Bryn Gravenor had won the Amateur Championship of Wales in snooker and the Billiards Association Cup and a gold medal for the highest break of 99 in competition.

Mr Stan Jones.
Mr Stan Jones won won the cup and gold medal in the Billiards Association competition with a break of 419.

Mr Horace Coles.
In June 1935 Mr Horace Coles a former member of the Liberal Club won the Billiards Championship of the Empire, he defeated the Indian Mr Pratyush Krishna Deb. While living at Abertillery Mr Horace Coles was a bank clerk and was residing at the Bush Hotel, he was a member of the Liberal Club though had moved to Newport. Upon retiring from the game in that same year at the age of 38 Mr Coles looked back at a very successful career, he had won the Welsh Championship four times, played for Wales and England in the British Empire Tournament and held several records. In 1933 he made a highest championship break of 363, two breaks of over 200 each in one session and had scored 3,000 points in three consecutive sessions.

I will post more individual successes and achievements when researched.

Mr Joe Davis at the Powell’s Tillery Institute.
In September 1945 the world champion snooker player Mr Joe Davis visited Abertillery for a series of matches against local players from the Central Club and the Powell’s Tillery Institute, the exhibition was played at the latter venue. The Welsh Amateur Champion Mr Bryn Gravenor defeated Mr Joe Davis on level scores five times. The scores in those games were as follows 72-33, 76-39, 81-28, 59-35 and 64-47. Later Mr Davis gave each of his opponents a 35 start lead with the exception of Mr Gravenor who started off 28.

The Fire of 1951.
On Sunday morning 6th May 1951 the Abertillery Central Club suffered from a bad fire, In the early hours Police Constable L. Webb was on duty in the town when he saw smoke coming from the club, he alerted the fire brigade and they arrived at the scene with fireman officer K. Pitt. The police evacuated the block and found that burning embers had fell from the fire at the club and had rolled under the floor boards. The brigade found the fire had spread to the joists, firemen wearing breathing apparatus entered the cellar via a door in the side of the building and extinguished the blaze.

By the 1950’s the club had a new roof, was refurbished and had changed its name to The Abertillery Central Snooker Club and Institute, it had been called the Central Club from an early date but was always locally known as the “Lib”. 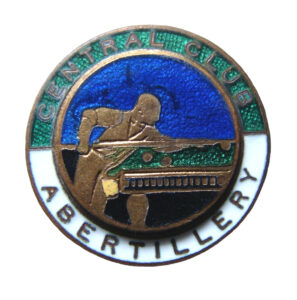 In 1956 at the height of their success, the Abertillery team (as seen below right) entered a national team competition sponsored by The News Chronicle national newspaper. The prize was the Championship Table from Thurstons Hall, Leicester Square, London.

Out of 1,109 team entries, the Abertillery team comprising Mr John Ford (captain); Mr Len Luker; Mr Des Meredith; Mr Emanuel Marks; Mr Jack Wellington; Mr Colin Meredith and Mr Fred Prewett, won the competition and was awarded the World Championship Table (as seen below right) which was made for the 1946-47 Championships held in Leicester Square London, the very table upon which Joe Davis made his record 146 and 147 snooker breaks and on which many record Billiard breaks were made by the top players at the time. 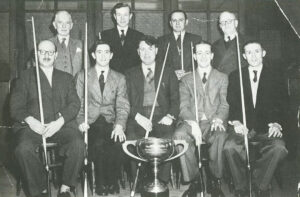 The winning team members were also each awarded a brand new Mannock Cue, these cues are now very rare and very valuable. The cue made by Mr J. P. Mannock was labelled as being “Anti-slip” this meant the butt-end was thickly tapered, thicker than normal, this prevented the cue slipping through your grip when attempting Masse’ shots whilst playing billiards. On a team photograph (as seen right) from the time of the win, the team were portrayed holding brand new cues, these were given to the members of the team just for the photo-shoot. These cues were not the presented J. P. Mannock Cues as mentioned. 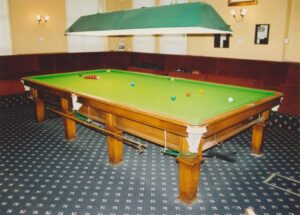 It was a wonderful achievement by what was considered to be the best snooker team in Britain. The final match of the championship was televised and shown live on TV, (but we were recently told by the BBC that they never recorded it onto tape).

The table (as seen left) was transported to Abertillery and proudly erected in the club where it stayed until its closure. The club still had many successes through the 1960’s and 70’s within the Rhymney Valley and Abergavenny Snooker leagues and still held on to its huge reputation.

As the club at this time never had a licence to sell alcohol and there was no provision to prepare food, the away teams in the various leagues and divisions post-match were entertained at the Highbury Club, Abertillery. 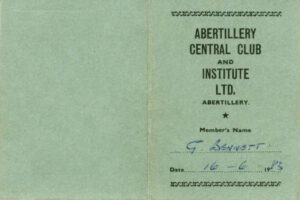 In June 1983 I became a member of the Central Club and Institute, Abertillery and was issued with my first Membership Card (as seen right) I joined the snooker teams, took great interest in the club and in the 1990’s I was elected onto the committee.

Mr David Edwards.
Mr David Edwards the marker at the club became the English Amateur Billiards Champion in 1987 and 1989, and he also reached the quarter finals in the World Amateur Billiards Championships in 1987 and in my opinion was the best player the club had ever produced. He once made a 700 billiard break and was making many century snooker breaks whilst practising in the club. 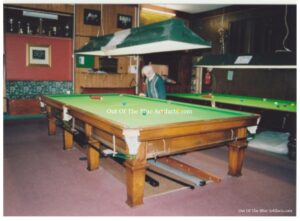 Sadly, the Liberal Club’s successful past could never be regained and, with the loss of many members, lack of interest in the sport in general and with losing revenue from the loss of the Citizens Advice Bureau, financially the club could not hold its head above the water.

For years, the club had been struggling and had it not been for the hard work by its officers, it would have closed long before it did. The first floor was opened out into one room, refurbished and the Joe Davis Championship Table was moved upstairs, an alcohol licence was obtained and a bar serving drinks was added (first time in 105 years), along with 2 brand new pool tables generously provided by the treasurer at his own expense, widescreen TV and other amenities but despite all the efforts and hard work by all of those involved who (provided their services free of charge) it was not able to stay open. 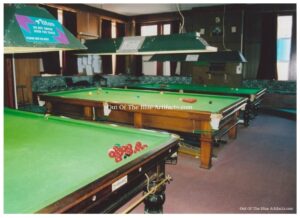 The Closure of the Liberal Club.
In the last committee meeting on the 5th March 2007 it was decided we had no option but to close, so ending 105 years of Liberal, billiard and snooker history in Abertillery.

The Liberal Snooker Club, closed, put up for sale by the committee, and was purchased by the Abertillery council as a office for the contractors who built the new Foundry Bridge. The money from the sale was shared by the members over the age of eighteen, who were all shareholders of the club.

The Later Years.
In 2007 the council purchased the old premises of the Liberal Club for a headquarters for the contractors who constructed the new Foundry Bridge.

In 2014 planning was put forth for the premises to be converted into a convenient store.