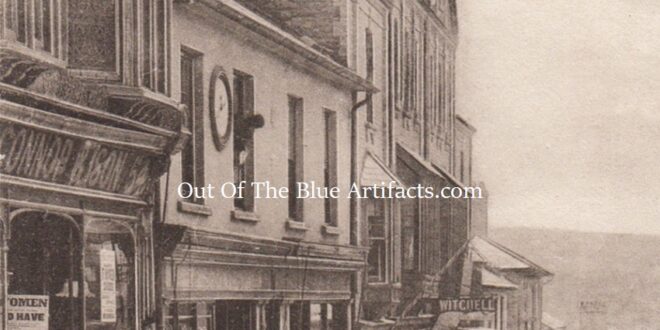 Mr H. Connop & Son Stores – Brynmawr.
During the 1870’s Mr Henry Connop Snr was at Brynmawr with his wife Ann Connop nee Pickard. The store, Messrs H. Connop & Son was situated at 54 Beaufort Street, Brynmawr (can be seen far left in the featured image above)

The earliest newspaper advertisement I could find featuring Mr Connop & Son stores, Brynmawr is from 1876 and can be seen in the image (above).

In the late 1870’s Mr Connop was nominated to sit on the Brynmawr School Board with Mr George Hicks and Mr Basil Jayne Esq, though did not get the required number of votes and along with Mr William Ward Williams, father of Mr John Ward Williams, the latter being the founder of the Abertillery Warwill’s Foundry failed to get a seat on the board.

The Death of Mr Henry Connop Senior.
In the 2nd quarter of 1881 I found that a Mr Henry Connop Snr had sadly died and his death was registered at Crickhowell. At this time his son Mr Henry Connop Jnr must have left Brighton and came back to manage the family store at Brynmawr.

Mr Henry Connop Jnr.
Mr Henry Connop Jnr was born in Coventry in 1844. While at Brynmawr Henry Jnr had met Miss Mary Jane Phillips, they got married in 1880, both went to Brighton, Sussex and opened a grocery store at 1 Bartholomew’s, Brighton. 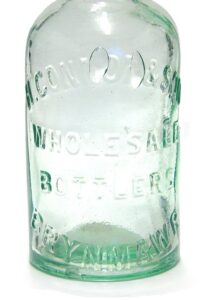 On the 1891 census Mr Henry Connop Jnr and his wife Mary Jane were at 54 Beaufort Street, Brynmawr as grocers and maltsters with their young family, Master James Connop, Miss Annie May Connop and a very young Alfred P. Connop. They had living with them – Mr James Ford, store assistant; Mr Arthur Read, store assistant and Miss Louisa Jayne a general servant:

Mr H. Connop & Son bottle from their store (can be seen in the image right).

In August 1889 Mr Henry Connop applied for a licence to produce beer from his store, his application was adjourned until September the same year. (more information to come).

In August 1889 Mr Henry Connop was the secretary of the Brynmawr Chamber of Trade, though I believe this group was disbanded a short while later as in 1902 it was reformed to some extent.

In September 1889 Mr Henry Connop was a director of the newly formed Pontypool Flour Mills and Bakery Company Ltd. This company was formed in May 1889 to acquire the premises of the Pontnewynydd Steam & Water Flour Mills. The new company were millers, bakers, confectioners and sugar boilers. The directors were as follows – Mr Henry Connop of Brynmawr; Mr Jenkin Jenkins of Brynmawr; Mr Thomas Howe of Abercarn; Mr Henry Lewis of Cardiff; Mr R. J. Morgan of Cardiff; Mr G. E. Gunn (Secretary) of Cardiff and Mr Ivor Roberts (Auditor) of Cardiff:

On the 1891 census Mr Henry Connop was at 54 Beaufort Street, Brynmawr and was listed as a grocer, he and his wife Mary Jane Connop had a small family – a son, Master James Connop, aged 9 years, a daughter Miss Annie May Connop, aged 8 years old, and a newly born son named Alfred, aged 10 months.

In August 1891 Mr H. Connop was the director of the South Wales Jam & Marmalade Company Ltd.

In October 1891 it was reported that Mr H. Connop was the chairman of the Pontypool Flour Mills and Bakery Company.

In November 1891 he was also the director of the Crown Soap & Candle Co Ltd. The other director was Mr Jenkin Jenkins of Brynmawr.

The First Fire at the Store.
In February 1898 the Connop premises at Brynmawr suffered a fire. The fire was believed to have originated in Messrs Morgan’s Boot Factory adjoining the store, it had spread to the Griffin Hotel at the top of Beaufort Street and had caused considerable damage. Along with the other damaged premises, the Connop Store was partially re-built, refurbished and the new premises was inspected by the authorities in the November of the same year.

On the 1901 census Mr Henry Connop Jnr and his wife Mary Jane were at 54 Beaufort Street, Brynmawr as grocers with their daughter Miss Annie May. They had living with them – Mr Ernest Harrhy, general servant; Mr Lionel H. Smith, general servant and Miss Jayne Morgan a general servant.

In February 1902 as mentioned above the old members of the Brynmawr Chamber of Trade met with the intention to reform the Chamber of Trade. The chairman was Mr Roberts J.P.; Mr W. J. Tong as secretary; Mr H. Connop was treasurer and president:

In April 1904 Mr H. Connop was the church warden at St Mary’s, Brynmawr.

In 1906 it was reported that Mr John Williams of Brynmawr was a haulier for Messrs Connop and that he had been in their employ for over 20 years, Mr Williams wages were said to have been 24s. shillings per week.

On the 30th March 1907 it was announced that Mr Henry Connop was made a Justice of the Peace for the Breconshire area.

In about 1910 Mr Henry Connop let his shop at Beaufort Street, Brynmawr to Mr John Edward Davies on a 21 year lease. Mr Connop & Sons still had control of the business though it was then known as J. E. Davies, Connop Stores, Brynmawr.

In March 1911 Mr John Edward Davies of the Connop Stores, Beaufort Street, Brynmawr applied to sell small quantities of beer to allow him to sell bottles from the shop. The report stated his existing licence allowed him to sell 4 and a half gallons. Mr Davies must had been granted permission as he had his own bottles produced with his name embossed on them – J. E. Davies of Connop Stores, Brynmawr. These bottles are mostly dark green in colour.

In 1927 Mr H. Connop was re-elected director of the Brynmawr and Blaina Gas Company.

The Second Fire at the Store.
On Thursday 29th August 1929 another fire broke out at the Connop Stores under the proprietorship of Mr J. E. Davies. The fire started in the stables at the rear of the premises, efforts were made to rescue a horse that was trapped inside the building though the animal perished in the flames. The local fire brigade and police prevented the fire from spreading to other buildings.

The Death of Mr Henry Connop.
On Tuesday 2nd September 1930 Mr Henry Connop sadly passed away whilst in his car at Shaftsbury Street, Newport. It was reported that he was accompanied by his wife and by his son who was driving the car. He was reportedly living at the Laurels, Nantyglo at the time and was interred at the Abergavenny Old Church following a service at Nantyglo Church.

The Death of Mrs Jane Connop.
In January 1935 Mrs Mary Jane Connop, wife of the late Henry Connop sadly passed away at her residence the Laurels, Nantyglo. Mrs Connop was taken to Abergavenny Old Church to be interred with her husband.

Notes of Interest – The Connop Stores, Beaufort Street, Brynmawr has been long demolished, its site is now the gated entrance off Beaufort Street to the car park at the back of the Legion Club and Davies D.I.Y. Store.

On some censuses and various documents Mrs Connop was known as Mary Ann and also Mary Jane Connop. Though in most important files, including her obituary she was reported as being  named Mary Jane Connop.