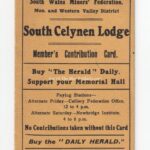 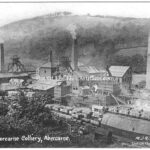 The Celynen South Colliery. The South Celynen Colliery, originally known as just the Celynen Colliery was sunk by the Newport Abercarn Black Vein Steam Coal Company Limited. The company was started on the 17th of February 1873 when communications between Mr John Cory, Mr Richard Cory Jnr, Mr Thomas Beynon and Theophilus John Beynon (trading under the name or firm ... END_OF_DOCUMENT_TOKEN_TO_BE_REPLACED 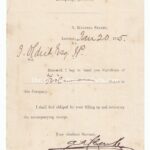 The Newport Abercarn Black Vein Steam Coal Company Limited – A Letter of Conformation of Share Certificate. This letter of confirmation of a share certificate was given by the secretary of the company Mr J. E. Clark to gentleman (illegible) on the 20th of January 1875. It is five shares in the company which at this time each share was ... END_OF_DOCUMENT_TOKEN_TO_BE_REPLACED