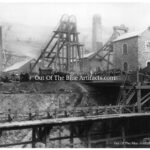 Llanerch Colliery – Cwm-nant-ddu. Llanerch Colliery originally known as Cwm-nant-ddu was sunk in about the mid 1840’s. Its early history is a bit confusing and unclear at present though it seems industry in the area started between 1825-1830. The iron works commenced in the 1830’s with an approximate workforce of 3,000 hands under the name of the British Iron Works. ... END_OF_DOCUMENT_TOKEN_TO_BE_REPLACED