March 26, 2017 Comments Off on Colliery Canteens

Colliery Canteens. The idea of a colliery canteen was first raised in the “National Food Journal” in October 1918. The headline was “Details of South Wales Scheme”, pithead restaurants. The suggestion was made by Mr T. C. Jones the director of ships stores. He said there were small eating rooms, restaurants attached to the munition factories and small arms works ... END_OF_DOCUMENT_TOKEN_TO_BE_REPLACED 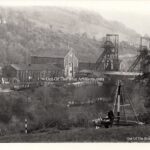 North Celynen Colliery. The North Celynen Colliery was sunk by the Newport Abercarn Black Vein Steam Coal Company between 1908 and 1916. In January 1908 at a meeting in connection with a proposed recreation ground at Crumlin, the councillors heard that Kay Field, one of the options for a park was out of the question as it had been promised ... END_OF_DOCUMENT_TOKEN_TO_BE_REPLACED