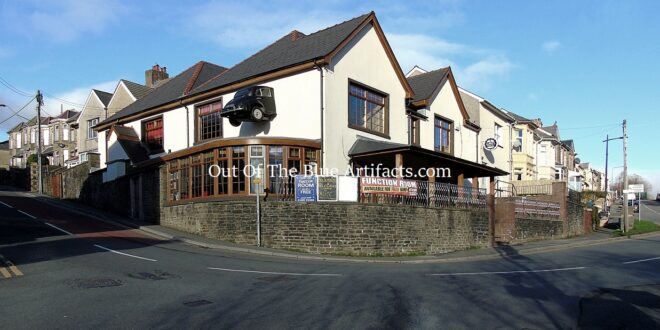 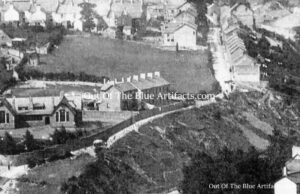 The Highbury Club.
In June 1909 the estate of Mrs Elizabeth Evans, ex-landlady of the Royal Oak Inn, Abertillery and landowner of large parts of the town was sold off at auction at the Market Hall, Abertillery.

Land at Brynteg, owned by Mrs Elizabeth Evans, advertised as a freehold site and ready for building was situated (as seen in the image from 1896 prior to the Foundry Bridge being built) on the junction of Gladstone Street and Alma Street. The land in question had a frontage of 58′ feet by 118′ feet, was purchased for £525., by Mr Harry R. Campion a Dental Surgeon of Abertillery. That is equivalent to £60,122,52p in today’s money. 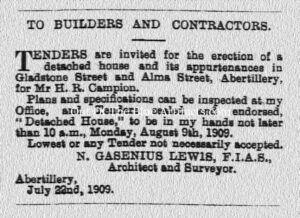 In July 1909 Mr Campion instructed Mr N. Gasenius Lewis, Architect living at Oak Street, Abertillery to plan for the construction of his houses and advertise for builders (as seen above) to construct the detached house and adjoining houses.

By November 1910 the houses had been constructed and Mrs Campion, Mr Campion’s mother advertised in the South Wales Gazette for two of them to let. 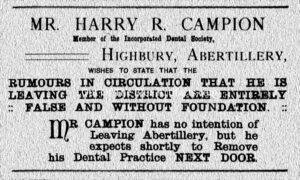 In 1920 Mr Campion moved from the detached Highbury House and set up his practice next door at 1 Gladstone Street. He began his dental practice at the new address on Monday 6th September 1920.

During the Strike of 1921 feeding centres were opened at the following places and supervised by the names in brackets – The United Methodist Church at Cwmtillery (Mr G. Gardner); The Blaenau Gwent Primitive Methodists Church (Mr W. Sawtell); The Bethany Baptist Church, Six Bells (Mr G. Ace) and The Commercial Road Baptist Chapel at Llanhilleth (Mr W. Daniels): The work of feeding the children was performed by voluntary workers under the supervision of Mr Hector Williams, Chief Supervisor.

Two meals per day were provided at the feeding centres, dinner and tea, though on a Saturday and Sunday breakfast and dinner was served. During the industrial dispute over 5,000 children were fed each day. After the dispute 700 children were given meals on a daily basis and throughout 1921 the Education Committee under Mr Arthur Llewellyn, Secretary of the Abertillery Education Authority had distributed over 1 millon meals.

In December 1921 it was reported in the South Wales Gazette that the Food Distribution Centre was removed from the Highbury House. The tenancy of which was given up to the old Council Chamber. 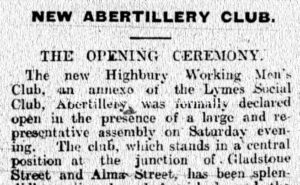 Mr William Potter, Chairman of the club presided over the opening, supported by the following – Mr George Davies of Blackwood, Secretary of the Monmouthshire branch of the Club Union; Mr George Groves, a representative of the Gwent Club Brewery; Mr J. J. Chick of Pentwynmawr; Dr T. B. Smith; Alderman Levi Harris; Councillor W. T. Williams; Mr Thomas H. Mytton; Mr George Daggar (Miners Agent); Mr Tom Adams (Secretary) and others: Mr William Potter stated he had wished the club was in a better financial state, they had just gone through a bad financial period but hoped that it would now pick up as the Lymes Club had paid a lot of money to purchase the Highbury House.

In November 1922 a new club steward was wanted at the Highbury Club and the wages were advertised as being £4. 10s. 0d. per week.

In November 1923 the Abertillery Town Football Club who had been registered at the Highbury Club with the Friendly Society had folded and had their membership with the society cancelled.

In February 1925 the Lymes Glee Party held an annual general meeting at the Highbury Club.

The Abertillery One-Way Traffic System.
In 1927, after a series of minor traffic accidents and close-shaves close to the corner of the Highbury Club on the junction of Alma and Gladstone Streets, there were calls for the roads layout at Abertillery to be made a one-way system. It was suggested that all traffic from the north be diverted down Oak Street and past the Bush Hotel, through town. All traffic travelling from the south heading north must go through town, over the Foundry Bridge and up Gladstone Street, cutting out Station Hill and that bad junction. The idea never materialised and was forgotten.

The Concert Room.
In December 1933 the Abertillery Council approved plans to add a concert room to the Highbury Club, Abertillery.

Fruit Machines Case.
In November 1934 the committee of the Abertillery Social Club and Institute Ltd, the Lymes & Highbury Club were summoned to court for having fruit machines in their premises and the use of unlawful gambling over a period of seven months. The defendants stated the profits were devoted to charitable purposes. The court stated that “the fruit machines, 3 spinning wheels with pictures of various fruits printed were made illegal in 1930, these machines were brought in from America and were affecting the morals of the country”. Even though they were made illegal in 1930 they were still used openly and the defence told of them being used at the last hospital fete, the bench adjourned, came back and stated the case against the institute was to be dismissed.

In December 1937 the proposal was to demolish the Highbury Club and widen the access between Gladstone Street and the existing Foundry Bridge, taking away the sharp corner. This idea was also dropped.

The Official Closure of the Highbury Club.
On 21st June 2001 the Highbury Club (Abertillery Social Club and Institute) was officially wound-up and it was closed as a Social Club, a short while later the building was purchased and reopened as a pub and renamed the Dolls House.

Notes of Interest – The Brynteg Hotel.
In October 1899 Mrs Elizabeth Evans of the Royal Oak Inn, Abertillery applied for a provisional full license for the proposed new Brynteg Hotel (this may have been the proposed premises later built as the Highbury House/Highbury Club) Mrs Elizabeth Evans owned the land that Mr Harry Campion later purchased and constructed the Highbury House in 1910.