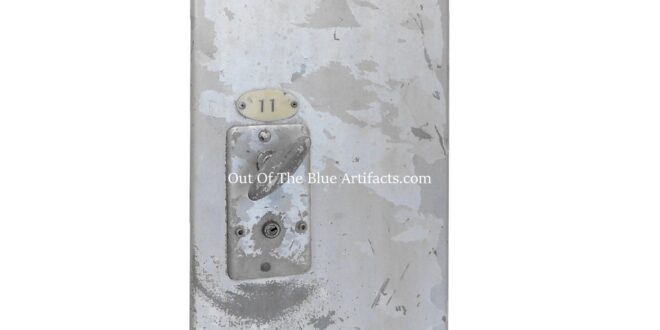 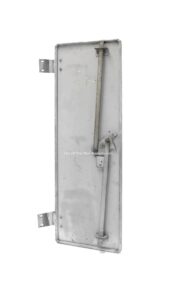 A Colliery Pithead Baths Locker Door.
As the collieries various pithead baths were constructed, between the early 1930’s and early 1950’s lockers were incorporated for miners to keep their clothes safe.

There were on average 1,000 lockers or more depending on the size of the workforce – 500 clean and 500 dirty lockers, each miner would have one of each locker, one in which to put his clean clothes when working and one to put his dirty clothes when his shift was finished. The clean and dirty lockers were in different sections of the pithead baths. The lockers were all connected to the heating system and any wet clothing would dry-out before the next shift began.

The layout of the lockers were a block of lockers facing each other with one locker over the other (top and bottom lockers) with a long seat running up both blocks the length of the aisle. You would have to stand on the seat to access the top locker, these top lockers were always allocated to the younger miners and the bottom lockers to the older miners as they wouldn’t have to climb up or down after the end of a long shift.