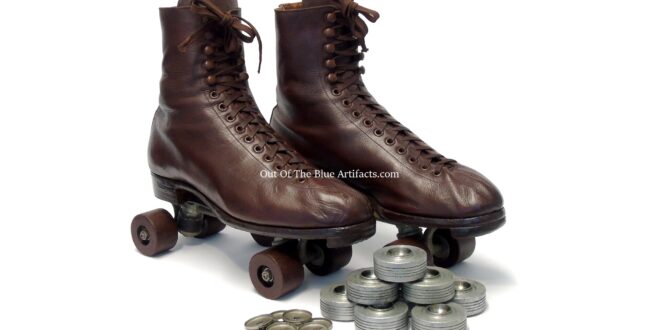 Made from leather, Bakelite and metal. Size – There is no size stamped on the boots although there dimensions are 12″ x 10″ inches. There are 15 lace holes with 72″ inch long laces to match.

Roller Skating in Abertillery.
Roller skating at Abertillery seems to have began when a rink was constructed at the Colliers Hall, Cwmtillery in March 1901.

The Colliers Hall.
On Monday 4th March 1901 a skating ring was opened to the public at the Colliers Hall, Cwmtillery. The main room at the miners hall was said to have been shared by the roller ring and a shooting gallery. It was stated in the South Wales Gazette that the whole undertaking had been launched by the Cwmtillery Workmen’s Institute and was opened by the Secretary Mr Hobkirk. I am not sure how long this roller ring was in use but after the pastime of skating was revived a new rink was opened at the hall (as seen below).

There were no other reports of the pastime of skating until it was revived during the winter of 1909. During this time it gained in popularity that the authorities quickly reacted and provided rinks within many public buildings and Mr Arthur Tilney at Abertillery constructed a purpose built skating hall at Carlyle Street, Abertillery.

The Market Hall.
On Tuesday 2nd November 1909 the Market Hall, Market Street, Abertillery was the first to provide a roller skating rink at the premises.

The Empress Skating Rink.
On Wednesday 17th November 1909 the Empress Skating Hall at Carlyle Street, Abertillery was opened to the public. The building was purpose built as a skating hall constructed by Mr Arthur Tilney, who also owned the Pavilion Theatre. After the pastime of skating died-off Mr Tilney converted the rink building into a picture hall and renamed it the Empress Picture Hall.

Colliers Hall.
On Wednesday 8th December 1909 the Colliers Hall Skating Rink was opened to the public. Mr Henry Sutcliffe was the instructor at the hall. The Colliers Hall was originally the first place to cater for roller skating back in March 1901 (as seen above).

Roller Skate Manufacturers.
In March 1910 Ads were placed in the South Wales Gazette for the sale of roller skates made by Richardson, Veloplane and Empress, these skates could be purchased at Mr Edwin Price’s Athletic Stores, Abertillery. Other skate manufacturers made skates such as – Richardson’s, Chicago, Relifast, Derby, Invicta, Union, Winslow, Elite and Meteor Skates.

The Lucania and the Regents Ballroom.
After the old Alexandra Skating Hall, later Kino Picture Hall closed, the building on Alexandra Road, Six Bells was sold and was renamed the Lucania which housed the Regents Ballroom, it was used as a dance hall with its own orchestra. The proprietor was reported as being a Mr Emlyn Everard Purnell of Gwern Berthi Road, Cwmtillery, Mr Purnell was also the conductor of the ballroom orchestra. The Lucania had a billiard hall and the ballroom which catered for roller skating during the 1920’s, 30’s and into the 1950’s.

Abertillery Sports Centre.
In the early to mid 1980’s the Abertillery Leisure Centre, Vivian Street, Abertillery was used as a venue for roller skating.