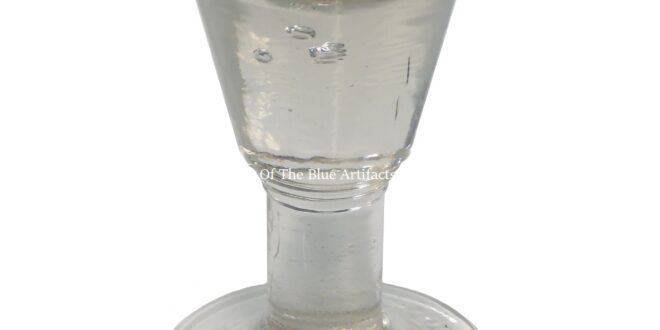 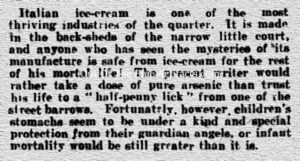 A Victorian Penny Lick.
These penny lick glasses were an early form of cone handed out by the street cart ice-cream vendors. After the ice-cream was licked from the glass, the vendor would dip the penny-lick into a small basin of water ready for the next customer to use.
Made from glass. Size – These solid glass licks were small (3 1/2″ inches x 2 1/2″ inches wide at the rim) in size with a deceptive concave top 14mm in depth at the centre to hold a very small dollop of ice-cream for a penny.
Early Ice Cream Vendors At Abertillery.
Amongst the first ice-cream vendors/café proprietors in Abertillery were Antonio and Louis Bracchi, Tidaldi’s, Bernie Bros, Domenico, Carpenini, Amarilli Jackson and Emilio Marenghi.
The Waffle Cone.
The glasses were dated to the latter half of the 19th century, though in 1898-99 were deemed unhygienic and were banned. At this time Italo Marchiony invented an edible waffle cone, patented in 1903 which later replaced the glass licks. It was said that Ernest A. Hamwi also came up with the idea of a waffle cone which he introduced at the Worlds Fair in 1904 so there was much contention over who thought up the idea.
The news clipping (above left) is from the Montrose Standard Register, July 1907 with the reporter stating he would rather drink arsenic than use one, though the children seem to be immune to it. So they may well have been still used after the alleged banning date.
2022-05-29
grahamgeorge