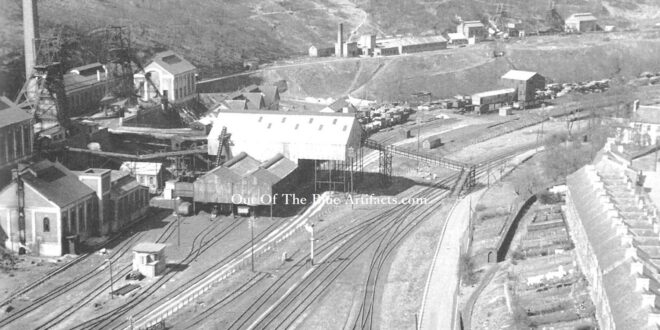 Aberbeeg Colliery (South)
There isn’t a great deal of information or many photographs of the Aberbeeg South Colliery (as seen in the image upper right. The colliery on the left was the Crumlin Navigation Colliery) it was late in the sinking operations and seems to be a forgotten pit.

The object of the company was to –
1/ To acquire the leashold mines land and premises at Aberbeeg Monmouthshire known as Aberbeeg Colliery and certain plant machinery the appliances connected therewith.

2/ The under-leases of Partridge Jones and John Paton & Co of the Tillery red ash seam of coal and the fire clay associated therewith under lands in surface rights of which the said colliery and company are lessees to adopt an agreement with Budd & Co, Newport and to carry on the business as colliery proprietors, miners, quarrymen, patent part manufacturers, carriers, shippers, wharfingers  and haulage contractors etc.

In August 1924 it was announced that new sinking operations were expected to commence on the western side of the River Ebbw between the Royal Oak and Crumlin. The Aberbeeg Company had been in negotiations with the landowners to work coal under Pentwyn, Pantglas, Kendon and other estates. It was also reported that the company was unsure if there was to be one or two shafts sunk, in the event that one shaft was sunk the company would make arrangements that the new colliery “Aberbeeg House Coal Colliery” would be a downcast shaft and another existing colliery in the close vicinity would provide the up-cast ventilation.

The Official Opening of the Aberbeeg South Colliery.
There was no evident official opening of the colliery, it seemed to have been a gradual opening in conjunction with the closure of the North Aberbeeg Colliery.

In November 1924 a new coal seam was struck. The news was announced by the Aberbeeg Collieries Company Limited. The seam was the household coal seam and that the sinking operations had been on-going for over a 12 month. The whole of the work had been carried out under the supervision of Mr Vivian Phillips M.E. The manager. (According to this report it seems that the initial date of sinking was set back?)

On Friday 30th October 1925 the colliers at the Aberbeeg North Colliery had their notices issued though suddenly withdrawn but were then on a day-to-day contract owing to the uncertainty of the underground conditions following the recent flooding and faults on the coal seam. The report went on to state that the new enterprise at the new pit “Aberbeeg South” was opening out rapidly and was hoped to be open before the end of the year.

Aberbeeg North Colliery.
A report from Saturday 17th April 1926, the Aberbeeg North Colliery owned by Messrs Budd & Co, Newport, had finally closed it had been recently carried on at a great expense but owing to the water problems and the fault they had no option but to close it down. It was understood that the men – 150 of them would be transferred to the “new colliery” which is still opening out.

The same report noted that  “Aberbeeg North Colliery would not be dismantled as yet as the pumps-men would still continue to work for the old workings were extended towards the new pit in Crumlin and if the water were to be allowed to accumulate there would be an adverse effect at the Crumlin end – When the new pit is in production all the coal that the North Colliery leaves behind will be mined and brought to the surface at the South Colliery”.

The Later Years.
In 1947 the Aberbeeg South Colliery was taken over by the National Coal Board.

In January 1956 the Aberbeeg Collieries Company Limited was officially liquidated.

The Closure of the Colliery.
I am unsure as to the actual closure date of the colliery.