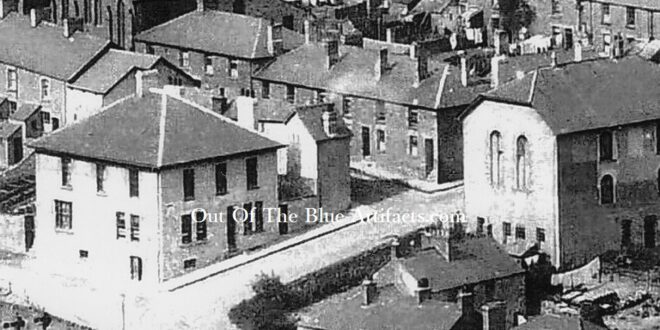 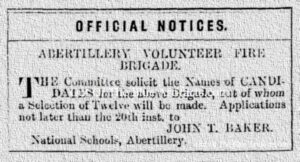 On Tuesday 17th March 1891 at a meeting of the volunteer fire brigade committee held at the Abertillery National School, Mr L. R. Rogers (Chairman) Mr Edgar Webb (Solicitor) Aberbeeg, stated that Mr Webb had promised to give the movement his support. Mr Wallace stated that the Abertillery Local Board had gave £25 towards equipment. Mr Wallace was elected treasurer and Mr Webb was invited to take the captaincy.

The Fire Engine Debate.
On Thursday 7th May 1891 at an annual meeting of the Abertillery Local Board a report on the finance of equipment was read from the meeting between a deputation from the chamber of trade and the local board. It stated the full equipment including a 15 per cent discount would cost £150.  One hundred feet of hose was also asked for and the chamber thought a new engine should be purchased instead of a second hand article. The concern of the inability to protect the area from fire would be compromised in the lack of funding and said that they should look at hiring an engine and appliances for a few months as an experiment. A list of manufacturers were read out and the firm of Messrs Shand, Mason & Co offered a second hand engine for £75 whereas a new engine was to cost £135 which in total the equipment would cost £150. The scarcity of the availability of water was noted and the meeting was adjourned until the opinion of an expert was sought.

Captain F. Fielding.
In January 1898 Mr F. Fielding was made Honorary Captain of the Abertillery Fire Brigade and was supplied with an officers outfit.

Messrs England Bros.
In February 1898 Messrs England Bros, general hauliers of Abertillery were asked to quote terms for providing a brake and two horses to take the firemen to the scene of any fire and the conveyance was to be at the command of the council whenever required.

The Electrical Call System.
In April 1898 an electrical call system was installed at the station Abertillery for the cost of £100.

On Monday 9th May 1898 at a meeting of the Abertillery District Council the Fire Brigade Committee decided to issue the captain of the fire brigade a journal for him to write monthly reports on the brigade. Also a fire-escape was to be ordered. It was also stated that they are to rent the house next door to the fire station belonging to Mr Titus Phillips as a central fire-call station and a depot for the fire escape. It was stated that Fireman Rogers was to have the house rent free in consideration of his undertaking to test all the hydrants north of Aberbeeg at least once a month with a wage of 18s. per week.

Firemen’s Insurance Payments.
In July 1899 it was proposed by Mr Carpenter that the Abertillery Firemen should be insured. It was later reported in March 1901 that the firemen would be insured for 5s. per year per man.

On Monday 12th March 1900 an Abertillery District Council meeting heard that the captain had resigned and that Mr Pittaway the lieutenant was be the new captain and that Mr Britton (Mechanical Engineer at the Tillery Collieries) should be the new lieutenant.

In July 1901 the tender of Messrs Liscombe of Newport was accepted for the supply of new hoses and couplings for £31. It was also recommended to the council to purchase 100 foot ropes and a jump-sheet.

In November 1905 the council stated that Fireman Rancombe’s wages were £1. 10s. 0d. per month and that his duties were the cleaning of the station and appliances, attending to the ordinary repairs of the appliances and attending to the alarm bells. 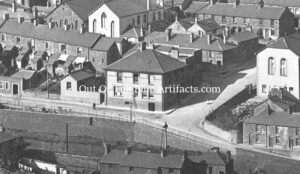 The image (right) shows the Abertillery Fire Station on Chapel Street after the renovations, it then had a flat roof. To the left of the council offices is the area where the new fire station would later be built.

The New Fire Station.
In 1911 the fire station on Chapel Street was becoming too small for purpose and the council began planning the new fire station, sometime between 1912 and 1913 the new station had been erected and was constructed on land next door to the Abertillery Council Offices on Castle Street, Abertillery.

On Monday 14th January 1907 at an Abertillery District Council meeting held at the Council Offices, Hill Street, Abertillery, the Fire Brigade Committee reported that in consideration of the frequent changes of address of the firemen in Abertillery and for the expenditure of re-fixing the fire alarms the question of making arrangements with a view of obtaining six cottages in Chapel Street should be approached for the use of firemen’s housing and brigade purposes alone.

On Monday 22nd January 1912 at a meeting of the the Allotments, Pleasure Grounds and Fire Brigade Committee the surveyor submitted plans of the new Abertillery Fire Station which was proposed to be built adjoining the Abertillery Council Offices in Castle Street. The cost was estimated at £400.

The New Fire Engine.
In April 1913 Abertillery had a motor fire engine, the engine which cost £1,060 was supplied by Messrs Henry Simonis and Co of the Pretoria Works, Walthamstow, London. It was between sixty and seventy horse power with two entirely different systems of ignition. The principle pump was on a turbine high lift pump principle on the Mather and Pratt design and was capable of delivering 400 gallons of water per-minute against a total pressure of 140 pounds per square inch. The pump was primed by means of a separate positive acting rotary pump and was supplied with suction and twin delivery outlets. The first aid engine which was of the London design was adapted for putting out cottage fires and could be brought into action immediately on reaching the scene of a fire. 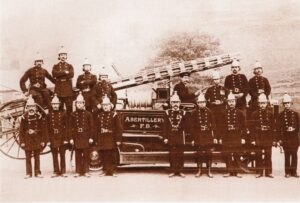 The engine was made of copper and tested to 250 pounds, fitted with a safety valve and pressure gauge with a Simonis three-way connection allowing also the use of the hydrant pressure if the gas was exhausted. The water was ejected by means of a gas system under pressure up to 125 pounds. The cylinders were in permanent connection with an automatic hose reel on which 150 feet of hose was fitted with a stop cock, nozzle and all connections. The fire-escape was of a Simonis double wood trussed “Pretoria” construction, fitted with automatic safety stops with plumbing gear, automatic locking lever and is on a special sliding table carriage. The escape was in three sections and could reach a height of 50′ feet. There was 1,200′ feet of hose fitted with extension couplings. The whole engine was painted red vermilion outlined in gold, with brass edging and rails.  On the side of the engine “Abertillery FB” was painted.

The engine arrived in Newport on the Wednesday when it was inspected by members of the Abertillery District Council while attending a meeting of the Joint Water Board and they returned up the valley on the engine driven by Mr Thurling of the Abertillery Fire Brigade. A halt was made at Llanhilleth where a demonstration was made of the powers of the engine. On the Thursday afternoon an opening demonstration took place on the square near the tin works attended by the council members, fire brigade and general public. Four jets of water was played on the Railway Inn and the tin works offices etc the fire escape was demonstrated also proving that Abertillery possessed the means of dealing with the most serious conflagration. The council also stated that the remodelling of the fire station is to get underway and the surveyor was to proceed with the plans.

The Fire at Cwm, Ebbw Vale.
In July 1937 the was a blaze in Cwm, Ebbw Vale which resulted in one death and four houses in Canning Street being destroyed, the Ebbw Vale Fire Brigade were overwhelmed and had to call on Abertillery for assistance, the Abertillery Fire Brigade turned up in their new 45 h.p. fire engine named the “Tyleri” and their state of the art engine (a much smaller engine capacity but faster and more efficient) pumped water from the nearby river at 250 gallons of water per minute to help extinguish the inferno.

On Tuesday 2nd April 1963 the Monmouthshire County Council issued a statement stating that they purchased the Tillery Sidings at Abertillery and that they would be used for a new fire station and possibly for other social services. The council had been approached by Messrs D. Rees & Sons of the Golden Crust Bakery for the use of the site, they were to build a new bakery upon the old sidings ground and employ many people to work there, Messrs Rees told the council if they could not have the ground they were going to move from the area. They were considering the bakery proposal though the council had plans for a scheme to construct a group of civic buildings which would include a public library, a registrars office, youth centre and a health clinic and the location was ideal for the long term planning so the bakery proposal was refused. The council went ahead with the construction of the new fire station and the overall scheme involved an expenditure of £150,000.

The New Fire Station.
In January 1966 the new Abertillery Fire Station had been completed and was opened for active service. The new station cost £52,000 and was the first building constructed within the scheme built on the site of the old Tillery Sidings, Abertillery.

A Description of the Building.
The new fire station was said to have been a model of its kind with the latest types of fire fighting equipment. It had its own emergency power unit which supplied electricity to the station in the event of a power cut, had a telephone switchboard with room for twelve extensions and a private emergency line to Blaina. The new station was responsible for turning out the appropriate brigades throughout the district as all calls from Llanhilleth to Brynmawr including Trinant was sent to Abertillery.

The Abertillery Fire Station had two fire engines with one having a 50′ foot fire escape and the other having a 35′ foot expanding ladder. They also had a land rover with a 350 gallon-per-minute pump and was the latest model of its kind in the county. There were fifteen full-time firemen and fifteen part-time firemen employed at the station.

The Later Years.
On the 18th February 2017 the police and ambulance services at Abertillery moved in to the Abertillery Fire Station so that the three services were all under one roof.

Points of Interest –
Messrs H. Lotery & Co.
In March 1965 the premises of the old Abertillery Fire Station on Castle Street was taken by Messrs H. Lotery & Co. The managing director Mr W. M. Saunders stated the company would be making uniforms for various services and initially they would be employing 30 to 40 girls. Messrs Lotery & Co Ltd were based at Herbert Road, Newport.

In August 1966 it was announced an extension had been built at the clothing factory which enabled Messrs H. Lotery & Co to employ 150 women at the factory.

The Old Council Offices.
Messrs H. Lotery & Co were not the only clothing business in that area as in 1962 Messrs J. Harvey Ltd a clothing firm based at Tredegar opened a clothing factory at the vacant council offices on the junction of Castle Street and King Street, Abertillery. The old council offices were converted into three large rooms with 25 machines in each room. The company were making duffel coats. Messrs Harvey Ltd initially employed 50 women and intended to employ up to 100 women. Mr A. White was works manager. The factory closed in 1965.