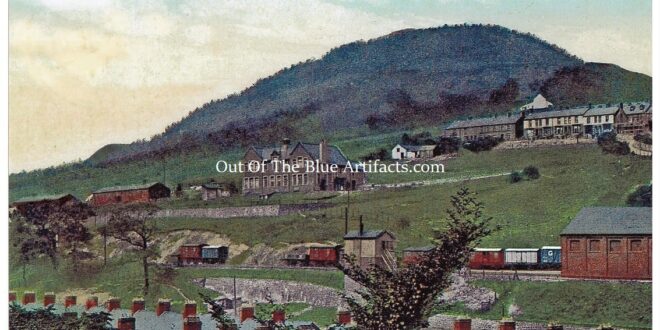 Points of Interest – At the bottom are the newly built houses of Glandwr Street. Two blocks of the Wooden Houses (far left) with the waste tips of the Rosemont Coal Levels that were behind Attlee Avenue (above). The white-washed Clyn Mawr Uchaf Farm House (far right) with the Blaenau Gwent Rows just below.

The houses that are now on Rose Heyworth Road can be seen (middle right) Rose Heyworth Road was not constructed until 1914, there was a road to Rose Heyworth Colliery but its route was from the Clyn Mawr Hotel, across the bottom row of the Blaenau Gwent Rows, across what is now Smith Road and up through the fields to the colliery. The main road to Blaina was along the side of Arael Mountain, now known as Old Blaina Road. In 1914 a new road was laid from the colliery straight down the side of the valley, linking up with the top of Gladstone Street, Ty Bryn Road and Oak Street junction seen far right.

Across the middle of the image is the Great Western Railway showing the Goods Shed built in 1895, its junction box and goods trucks.

Wooden Huts.
The Wooden Huts, called Rose Heyworth Cottages were constructed in the mid 1870’s. Each house contained a scullery, living-room and two bedrooms all on one floor, they consisted of 12 houses divided into 3 blocks of four, in a field adjacent (north) to the Intermediate School. They were thought to have been originally constructed for the sinkers at Rose Heyworth Colliery, though after the sinking operations finished the colliery company let the cottages to the workmen as tenants.

At the time the huts were built they were placed a fair distance apart from each other as a fire-safety precaution. In April 1893 Mrs Margaret Perrot was badly burnt when an oil lamp was tipped over at her house in the Wooden Houses and in April 1911 a fire broke out at Messrs Flook’s home, the first block closest to the colliery, two boys Leonard Flook and William Henry Flook were sadly killed in the inferno. They neighbours in the other houses in the block were – The Meek’s, Perrot’s and the Jones’. The ensuing fire engulfed the whole block of 4 houses, the other families escaped without injury. The other blocks were occupied and stayed as such until the early 1920’s when the council deemed them unfit for habitation, they were condemned and demolished when the new houses were built.

Blaenau Gwent Rows.
The rows, originally called Clyn Mawr Buildings, later Newtown and Blaenau Gwent Rows were constructed in 1874-75. Mr Lawrence Heyworth of the South Wales Colliery Company and Rose Heyworth Colliery was the architect of the houses on the rows. Mr Heyworth invited tenders from builders in late 1873 and his company opened out a quarry behind the Rising Sun Inn on the Cock n Chick mountain for stone to be used in their construction. The building of the rows coincided with the sinking of the Rose Heyworth Colliery in 1874. The Rose Heyworth Colliery was joined with Cwmtillery Colliery below ground for ventilation purposes and in the late 1950’s a tunnel was driven between the two collieries below the Mynydd James mountain (as seen) in the image above.