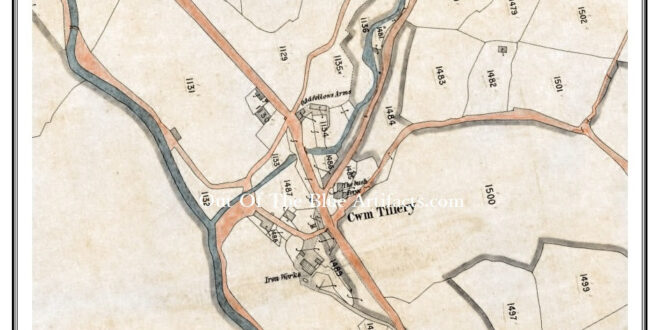 Abertillery Iron Works 1830s.
In the 1830’s Mr Richard Walker was an Iron Master based at Abertillery, sadly very little is known about him. Mr Walker was originally from Pontypool, his daughter Miss Harriet Walker married Mr William Webb (Brewster of Aberbeeg). 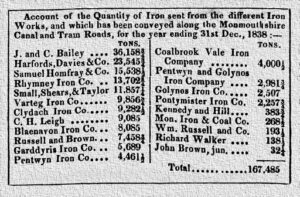 Mr Richard Walker established the Iron Works at Abertillery in the 1830’s, (situated where Tesco’s Supermarket is today) he was sending quantities of iron down the Monmouthshire Canal and Tram Road. Accounts from the 31st December 1839 shows that he sent 138 tons of iron through their network (as seen on the list left). That’s not a great deal considering Messrs J and C. Bailey sent 36,158 tons down the tram road in the same period but it shows he was producing significant quantities of iron at Abertillery. He was also a magistrate who served on the bench at Blaina along with other eminent men of the area at this time.

At an inquest at Blaina on the 13th April 1839 concerning the death of a worker in the employ of Mr Thomas Brown Esq (Iron Master and Colliery Proprietor) at Blaina and Cwm-Celyn, the jury consisted of gentlemen from the area including Mr Richard Walker (the Coroner wanted members of the jury to have had connections with Mr Thomas Brown Esq, though there were arguments over this, concessions were made but the jury still consisted of many prominent men known to Mr Brown).

The Death of Mr Richard Walker.
Mr Richard Walker died in St Nicholai near Marburg in the Empire of Austria on the 2nd September 1863. The report states that he had left a will and the executors were Mr William Webb, Aberbeeg coal merchant and Mr James Temple Wightman, a Pontypool coal merchant. At this time Mr William Webb, apart from being a maltster and brewer was busy establishing the Aberbeeg Colliery (North), the colliery began under the ownership of Mr William Webb (Brewer & Maltster), Mr Thomas Spittle (Iron Founder) and Mr James Partick in 1860 and had been sunk by 1862 with a great amount of money being expended on it.

Points of interest – The main image above shows the Abertillery Iron Works, main roads, tramroad and the River Ebbw (left) with the Tillery Stream flowing into it (right). Originally the Cwmtillery area extended down the eastern side of the Tillery Stream. Abertillery was on the western side and took its name from the (Mouth of the Tillery Stream) which grew around the area over time and later the boundaries moved to accommodate. Also shown is the Bush Inn and forge attached, the Oddfellows Arms and stables.

The Oddfellows Arms was owned by Mr Thomas Cardy, he was Abertillery’s main haulier, he was using many horses to haul supplies up to – and coal from – the levels in the Abertillery/Cwmtillery valley’s to the tram road that ran through the town from Newport to Blaina.

In April 1856 as the railways and tramroads made their way up the adjoining valleys, Mr Thomas Cardy gave up his hauling business and sold his horses etc, the sales sheet described them by colour and size. They were measured in hands and were between 15 – 17 hands high. Mr Cardy said the reason for his selling-up was because of the colliery companies employing steam and locomotive power.