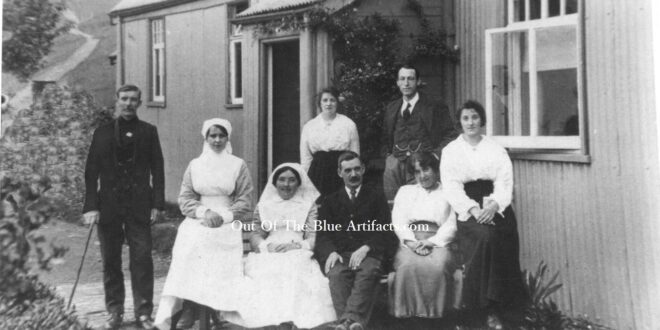 Abertillery Isolation Hospital.
The need for an isolation hospital at Abertillery was brought up as early as January 1892 after an outbreak of small pox at Blaina in that year.

Following is a Link to – Blaina and Nantyglo Isolation Hospitals.

Abertillery.
In July 1898 typhoid and diphtheria broke out with a few deaths reported, the patients were confined to their houses.

In January 1900 the council were looking for suitable places to build an isolation hospital, the Arael Mountain had been considered but the area was used as a route to convey milk and they couldn’t risk any contamination so they dropped their plans.

In 1901 the council were having trouble obtaining land to built a fever hospital as the landowners were not helpful in giving their land for such a purpose and the council was urged to get land by compulsory purchase.  Thirty cases of diphtheria was reported in Abertillery in one month, with seven deaths from the disease, with one typhoid case.

The Proposed Site at Cwmnantygroes, Six Bells.
After years of wrangling Abertillery Council Sanitary Committee got a suitable place for an isolation hospital at Cwmnantygroes, Six Bells. It was reported “Its proposed site is on a level piece of land and nicely sheltered, it is owned by Messrs Webb Bros and the committee are awaiting on his solicitor Mr Vatchell to draw up an agreement to purchase the site and to build a permanent hospital on that place”.

In March 1902 Mr Vatchell on behalf of Messrs Webb offered the Cwmnantygroes site to the council to rent at £5 per annum. 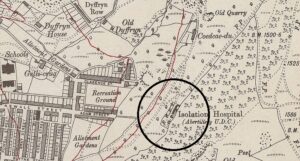 The Proposed Site at Coed Cae Duu.
The council changed their mind and instead visited Coed Cae Duu, pronounced (cotch-a-dee) with the intention of purchasing the four cottages owned by Mr Rees Rees along with the land to erect an hospital though they were advised by the surveyor to purchase the table ground further up by the edge of the woods instead (as seen circled on the map above).

Tenders for an Iron Corrugated Structured Hospital.
Tenders were to be sent out for the erection of the corrugated iron hospital building before the next meeting.

The 1902 Health Report.
A report on health in Abertillery during March 1902 showed thirty-two cases of diphtheria twelve cases of scarlet fever and two cases of typhoid.

In July 1902 the tender of Mr D Powell Abertillery was accepted for the digging out of the foundations of the Abertillery hospital and a cost of £55. 11s. 6d. 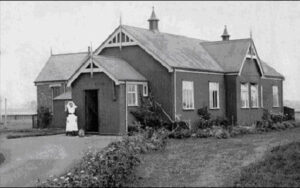 Description of the Building.
There were two six bed wards under one roof. There were four small administrative rooms with a kitchen at the rear and a bedroom over the kitchen. Each ward had a linen cupboard, bathroom and water closet, there was a “Thresh” disinfector apparatus and an Ambulance Cart for the removal of patients.  (The image above is of a typical design of an Isolation Hospital of the time. Nearly all of the Corrugated Iron and Iron framed Isolation Units were built on this or a similar design).

In January 1903 the tender of Mr A Phillips was accepted for supplying materials and enamel ware for the hospital at a cost of £4. 13s. 0d.

Mr and Mrs Maskell.
In 1909 alterations to the Abertillery Isolation Hospital took place to add another room for the purpose of a bedroom for a caretaker and matron. The post of caretakers were given to Mr and Mrs Maskell, Mrs Maskell being appointed as nurse of admissions.

The Telephone Connection.
In October 1910 a telephone line was provided by the post office to the Abertillery Isolation Hospital. In the same year the health officer reported thirty-nine cases of scarlet fever and one case of diphtheria.

A report from 1922 stated that the Abertillery Isolation Hospital was outdated and too small for the population and generally unfit for purpose.

July 1923 the council reported they were having trouble repairing and maintaining the road to the Abertillery Isolation Hospital and that they should look at having it relocated.

In 1928 it was reported that the recent epidemic was subsiding.

The Maternity Hospital Proposal.
March 1932 the council stated the isolation hospital would remain closed and said there was no need for it to be adapted to be used as a maternity hospital as suggested, as the council was short of money.

The Germ Concern.
The Gray Colliery Lodge, Abertillery sent a resolution to the council asking for the hospital to be re-opened as there were men in the colliery who had members at home with infectious diseases and they were afraid of spreading them, others afraid of catching them!

In February 1933, the County Medical Officer suggested and put forth a paper on the provision of “Isolation Hospitals”, it suggested closing all small hospital units and having one big central “Isolation Hospital”. The town of Abertillery would be grouped with Abercarn, Ebbw Vale, Risca, Nantyglo and Blaina to be served by a new proposed isolation hospital at Crumlin, Monmouthshire. The discussion was referred pending a full report. It was proposed that Abertillery decline the offer to be part of the new plan but also to keep the old Abertillery Isolation Hospital open but mothballed in readiness for any new outbreaks, with all staff on stand-by. It was also suggested that it be taken from the District Council and put into the hands of the County Council.

In 1938 meningitis “spotted fever” broke out in Abertillery and Blaina, with one fatality in Blaina and three in Abertillery. The patients were transferred to the special Fever Hospital at Bargoed. A few other deaths were reported but the isolation hospital at Abertillery was not re-opened as it could not treat this disease and it was closed permanently just shortly after.

The Later Years.
The old Abertillery Isolation Hospital was closed, demolished and the site cleared, its foundations and paths can still be seen today, on the side of the mountain just below the treeline, overlooking the playground and allotment area.