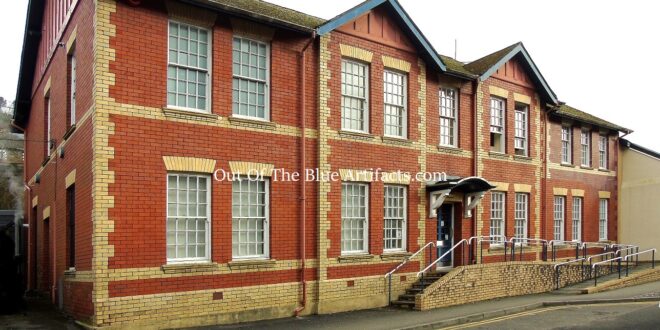 Abertillery Police Stations and Court Houses.
In the mid 19th century the main police station, the County Constabulary was at Blaina. There were police officers in Abertillery at this time though they were not based in a station, they seemed to have been based in either their own home or in police houses in the town.

The Magistrates Court.
In the 1850’s the magistrates at Abertillery under the chairmanship of Mr J. Conway (Tin Works proprietor) held court in the Odd Fellows Arms close to the tin works (where the Abertillery Fire Station is today).

Mr Charles Banfield.
In 1853 Mr Charles Banfield (Police Officer) was patrolling at Six Bells at the time a railway accident occurred. He was in all the reports and inquests but no mention of where he was based.

Mr Charles J. Haysom.
All records show that the first resident police officer in Abertillery was Mr Charles J. Haysom, he and his wife Mary Ann Haysom nee Starks, lived in Abertillery in the 1860’s and he attended many scenes of crime, sometimes his wife accompanied him when anyone needed aid or comforting.  Later Mr Haysom was reported as being employed as the tin works security policeman in Abertillery. The collieries also had there own police, sometimes the officers were contracted to the colliery by the constabulary and paid for by the coal owners.

The First Police Station.
In 1871 the census shows that there was a police station on Market Street, Abertillery. It was situated as being adjacent to the Commercial Hotel and a few premises away from the Top Bell Inn. It looks as though it was where the Market Hall would later be built.

Mr Patrick Fleming.
The 1871 census states Mr Patrick Fleming a police constable aged 31 years old was in charge and living there with his wife Mrs Mary Ann Fleming aged 30. Mr Fleming was from Ireland and his wife from Cheltenham, Gloucester, they had been in Abertillery since 1869. 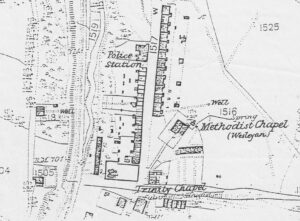 The Second Police Station.
Up until this point Abertillery wasn’t well populated and all Police work was organised from the County Constabulary in Blaina. As stated (above) there was some sort of police station on Market Street, Abertillery in the early 1870’s.  A report on the need for a police station at Abertillery was put to the County Police Committee. The committee agreed to this and set out terms on financing and purchasing land to build a new police station. The committee arranged to lease ground at Wesleyan Road, Abertillery, later to be re-named Tillery Street. It was built on land rented from the Brynmawr Coal & Iron Company at £2. 13s. 6d. per annum and to be built at an estimated cost of £1,200.

On the 15th March 1878 tenders were invited for the building of the new purpose built Police Station at Abertillery. Tenders to be sent to Mr Charles B. Fox, clerk of the police.

On 22nd March 1878 a meeting of the County Police Committee took place at Usk, those present were as follows – Mr S. R. Bosenquet Esq (Chairman); Mr A. D. Berrington Esq; Mr J. C. Hill Esq; Mr C. J. Parkes Esq; Mr Basil Jayne Esq and Mr John James Esq: The committee gave the go ahead for the new station at Abertillery and accepted the tender of Messrs D. J. and D. Davies of Cardiff at a cost of £1,180.  The population of Abertillery at this time was 6,000.

The Contractor and Architect.
The contractor for the new police station at Tillery Street, Abertillery were Messrs D. J. and D. Davies of Cardiff

The Telephone Connection.
In April 1898 the Monmouthshire Standing Joint Committee at Newport decided to connect the Police Station at Abertillery to the Telephone Exchange.

The Old Reading Rooms.
In 1882 Mr T. W. Powell took over the Tillery Collieires from Mr Basil Jayne and in 1884 he built a library and reading rooms at Tillery Street. In 1898 the Powell’s Company had the new Powell’s Tillery Institute built at Division Street, Abertillery. The old reading rooms were abandoned.

On Wednesday 7th August 1895 at a meeting of the Monmouthshire County Council a letter was read from Mr Samuel Nathan Jones of Abertillery, to inspect the old Powell’s Tillery Reading Rooms, left abandoned near the Abertillery Police Station on Tillery Street, in view of the proposal to purchase the building to use as a court house. Later the Powell’s Steam Coal Company built the new Powell’s Tillery Institute and sold their old Reading Rooms for £1,000 and the construction of a court house next to the police station went ahead.

The Contractor and Architect.
The contractor of the new Abertillery Court House on Tillery Street was Mr W. Smith. The architect was Mr W. Tanner.

On Wednesday 9th October 1901 at a meeting of the Monmouthshire Standing Joint Committee the tender of Messrs D. W. Richards at a cost of £4,400 was accepted for the construction of the new Abertillery Police Station and Court House.

On Tuesday 27th May 1902 Mr Bosenquet (Chief Constable of Monmouthshire) came to Abertillery, he inspected the old station and all the book work. He stated that there were 3 sergeants and 19 constables based at the Tillery Street Police Station. The population of Abertillery at this time had risen to 21,955.

The New Station.
On Wednesday 18th February 1903 the new Abertillery Police Station (as seen in the featured image above) and Abertillery Court House were opened. The selection of the site was not an easy one, the preferred site had already been let (though I don’t know where this was?) so the site between Cwm Street and Queen Street was chosen and the ground secured for a Headquarters Station and a Court House. The contract of Messrs D. W. Richards of Newport was carried out in a satisfactory manner and the final cost was £5,000.  The site was on a hill in an awkward position fronting two streets parallel to one another. The frontage to Cwm Street was 90 feet and to Queen Street being 120 feet. The depth between the streets was 150 feet and the rise from Cwm Street to Queen Street being 36′ feet.

As of these difficulties, the station was built in two blocks, that fronting the Cwm Street consisting the police station, entrance, charge office 3 cells, constables day room and offices with accommodation for ten single constables, a superintendents office, married sergeants quarters, consisting of a parlour, living room, scullery etc and three bedrooms. The quarters in each instance were private connected inside by doors having separate entrances.

The frontage to Queen Street has a house for the superintendent, comprising a parlour, living room, kitchen and offices, with four bedrooms and a bath room. On this elevation was the court house 37′ feet by 22′ feet, retiring rooms for the justices and witnesses. Separate entrances were provided for the public, police and prisoners, the latter being brought from the cells from the lower section via a flight of stone steps.

The actual buildings were built of 16″ inch hollow brickwork, the red face bricks used being from the Star Brick Works at Risca and the buff face bricks were from the Ebbw Vale Works. The cells were constructed in double thickness in accordance with Home Office regulations. The buildings were heated by hot water, the heating contract being carried out by Mr Perman of Newport. The buildings were designed by Mr William Tanner F.S.I. County Surveyor and erected under his supervision.

The Contractor and Architect.
The contractor of the new station was Messrs D. W. Richards of Newport. The architect was Mr William Tanner F.S.I. the county surveyor.

The Formal Opening.
There was no formal opening but previous to commencing the business of the courts the magistrates inspected the building and expressed themselves as being thoroughly satisfied with what had been provided. Presiding Magistrate Mr J. Green of Blackwood was the chairman. The other magistrates on the bench were as follows –  Mr Samuel Nathan Jones; Mr E. J. Williams; Mr T. B. White; Mr T. Phillips; Mr W. Stewart; Mr T. Vatchell; Mr J. Richards; Mr G. Padfield and Mr J. Davies: 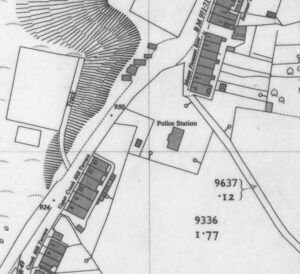 Later a police station was opened at Cwmtillery (as seen on the map right) It was built on the aptly named Crook Hill and housed a few police constables over the years though I believe it ceased being a station in the 1970’s.

The Later Years.
From about 2010 the Abertillery Police Station at Somerset Street was used on a part time basis, it is now closed and was later sold in about 2017.

On the 18th February 2017 the Ambulance and Police services moved into the Abertillery Fire Station at Station Hill to share the same building.