Abertillery Post Offices.
The First Post Office – Postmaster.
The first post office at Abertillery was on the railway platform, part of the Abertillery Tin Works adjoining what would become Pond House. The first sub-postmaster, sub-postmistress was Mr Edward Jones, a contractor and his wife Mrs Jane Jones, nee Hughes, Abertillery. Mr and Mrs Jones were the parents of Mr Samuel Nathan Jones. They took up the post in 1848 with the wage of £5 per annum, equivalent to £496.00 in today’s money, about £10.00 per week. At this time the Abertillery Post Office and Platform was on the old tram road. The two were close to the old Walker’s Iron Works, (later) the Abertillery Tin Works and along with the original Bush Inn were a few of the original premises of which the town of Abertillery grew around.

Mrs Jane Jones.
Mrs Jane Jones 1822-1903 was one of the original inhabitants of Abertillery, she was the daughter of Mr David Hughes of Six Bells. Her brother was the Rev Dr Nathan D. Hughes who became the foremost Baptist Minister in America (more detailed information below). Mrs Jones was also one of the founders of the Carmel Calvinistic Methodist Church at Abertillery and the Trinity Chapel at Church Street, Abertillery, was one of the most successful business women in the district.

Vending Machines.
In 1890 the Abertillery Local Board introduced a “Post-Card and Stamp” vending machine scheme in the town. These vending machines were attached to posts erected around the town. upon the insertion of the coins, would issue the card and stamp.

Mr Titus Phillips Post Office.
In 1896 Mr Titus Phillips retired to Newport, Monmouthshire and his son Mr J. Emlyn Phillips took over his business as general grocer and sub-postmaster, the post office was at his shop in the town.

The Bush Hill Post Office.
In May 1902 tenders were put out for the building of a new purpose built Abertillery Post Office, this new post office (as seen in the main featured image above) was to be situated on the Bush Hill opposite the Bush Hotel and would be built and financed by Mr Titus Phillips, then rented out to the post office authorities.

In March 1903 the new Abertillery Post Office was completed, there is no known information on the official opening though at the same time the building was opened, Mrs Jane Jones the original post-mistress passed away and the contractor Mr William Phillips went bankrupt.

The Church Street Post Office.
The old post office at the Bush Hill, Abertillery was becoming too small for purpose, they couldn’t handle the vast amount of parcels and letters coming in or going out. A new much larger building was needed and the authorities chose an area at the top western end of Church Street, Abertillery.

The new site was in the buildings at Church Street, the block was built in 1902 and contained Mr T. H. Pritchard, chemists, Roath Furnishings and Messrs Newell’s cafe to name a few. In 1919 a fire occurred at the Roath Furnishing building, the adjoining cafe was damaged resulting in both buildings being made derelict.

In June 1923 Mr W. H. Hiley sold to H.M. Office of Works the two leasehold shop premises in Church Street, the old building that was once occupied by the Roath Furnishing Company and that of Mr W. Newall. The vendor for whom Mr A. H. Dolman acted for was Mr A. Jackson, a confectioner, Church Street, Abertillery. The two premises were demolished and the new Abertillery Post Office was constructed in their place.

The Official Opening of the New Post Office at Church Street.
On Tuesday 1st December 1925 the new Abertillery Post Office at Church Street was opened. It had been built and financed by the Crown. The time of opening was at one o’clock as this was the time business at the old post office premises officially ceased.  The opening ceremony was officiated by Mr L. Elliott J.P. (Chairman of the Abertillery Urban District Council) with Mr H. G. Smith (Postmaster at Abertillery); Messrs J. Bytheway (Postmaster of Newport); Mr J. H. Haynes (Assistant Engineer); Mr T. H. Miles (Chief Superintendent of Newport); Mr H. J. Hunter (Sectional Engineer of Newport); Mr H. McMurray (Assistant Engineer of Newport); Mr H. J. Marsh (Traffic Superintendent, Telephones etc of Newport); Mr J. Snellgrove (Abertillery Trade and Labour Council) and Mr Edgar Bevan (Abertillery Chamber of Trade): The building was inspected by a small group of dignitaries and later the main doors were opened to the public.

Description of the Building.
The new post office was a modern building, it included a ground room with serving counter, letters were posted inside or outside with an automatic stamp machine accessible from the outside. A chute for parcels, a message lift and a room for the message boys while the postmasters room was situated for close supervision purposes. Downstairs were the store-rooms, male clerks and postmen’s retiring rooms with a large sorting office. In the next area were the switch-room with a switchboard with automatic dialling along with a battery room and female retiring rooms. The top story was for the caretaker-operator which consisted of a kitchen, bathroom, two bedrooms and a sitting room. The whole building was lighted by electricity and heated by hot water pipes and radiators.

The new post office was posting 22,000 letters per week with 28,300 letters being delivered per week. The new exchange room was fitted with multiple battery cells of the signalling type. The switching arrangements were designed to enable the telephone operators to connect subscribers through to the desired connection with the minimum loss of time. The equipment consisted of three sections with a total capacity for 400 exchange subscribers and 60 trunk and junction lines. There were 90 miles of external underground wires in connection with the telephone system and over 600 miles of overhead wires, inside the exchange was 45 miles of wiring.

The Sorting Office Removal.
On the 25th February 1989 the sorting office moved from the General Post Office, Church Street, Abertillery to the industrial estate units area at Cwmtillery.

The Closure of the Main Post Office.
On the 14th September 1991 the General Post Office, Church Street, Abertillery was closed for the last time and demolished. 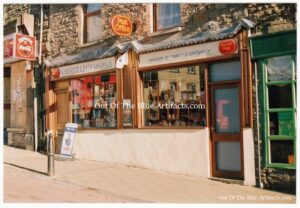 The Abertillery Post Office.
In late 1991 a new Abertillery General Post Office opened opposite the old postal building in the old Barrels Grocery Shop (as seen opposite) in Church Street, Abertillery. This new Post Office was in use from 1991 until the early 2000’s. The postal services later moved to Anvil Court council building opposite.

Anvil Court Building and Post Office.
In the mid to late 1990’s the council building known as Anvil Court was constructed south of the Foundry Bridge. In the early 2000’s the Abertillery General Post Office was moved from its small premises at Church Street into that new building.

Point of interest – Mrs Jane Jones nee Hughes, the first postmistress at Abertillery in 1848 was the sister of Rev Dr Nathan D. Hughes who emigrated to the U.S.A. and became the foremost Baptist Minister in America. Mr Nathan D. Hughes had a son Mr David C. Hughes, whose son Mr Charles Evan Hughes became a very successful U.S. Politician (as seen below) featured on a set of U.S. postal stamps. 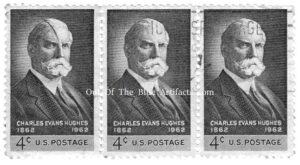 Mr Charles Evan Hughes 1862-1948 (as seen left) was born at Glen Falls, New York in 1862, son of the Welsh immigrant Mr David C. Hughes and Mrs Mary Hughes nee Connelly, a sister of the State Senator Mr Henry C. Connelly. Mr Charles Evan Hughes became a lawyer, statesman and politician. On the 6th November 1906 he defeated Mr William Randolph Hearst to become the Governor of New York and in 1916 he ran against Mr Woodrow Wilson in the U.S.A. Presidential Elections, being defeated on that occasion by the more experienced candidate.

Mr Hughes sadly passed away at the Wianno Club, 107 Sea View Avenue, Osterville, Massachusetts in 1948 and is buried at Woodlawn Cemetery, New York. A man who had done so much for American politics in the early 1900’s descended from a family who lived at Six Bells, the same family who worked hard to do so much for the town of Abertillery.