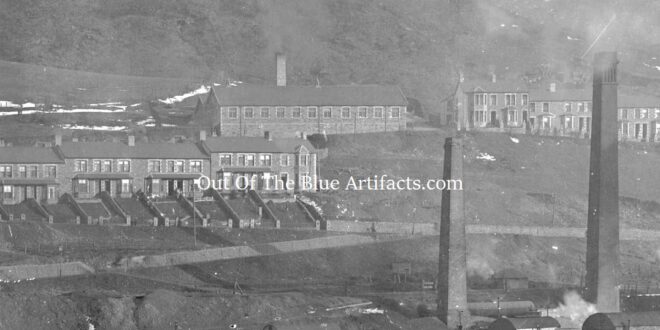 Abertillery Steam Laundry.
The Abertillery and Western Valley’s Steam Laundry Co (as seen in the middle of the featured image above) was situated at New Princess Street, Abertillery, later to become Richmond Road.

The Steam Laundry Proposal.
On Tuesday 5th May 1891, at a monthly meeting of the Chamber of Trade at the National School Rooms Abertillery, the need for a steam laundry was proposed by Mr Samuel Nathan Jones. Mr Jones said, as of the build up of dirty industries in the area it was becoming increasingly hard to wash and dry linen in Abertillery.

The Hafod Van Site.
The company was to build the laundry at Hafod Van, Six Bells. This site was perfect as it had a private water supply and was in easy distance of a coal supply. The company vans were to call on customers at the following towns – Brynmawr, Nantyglo, Blaina, Abertillery, Six Bells, Aberbeeg, Llanhilleth, Crumlin Newbridge, Abercarn, Cwm, Victoria, Ebbw Vale and Beaufort. This was to save the customers the costs of sending the laundry by rail. The cost of building and equipment was estimated at £2,000.

In 1903 the company failed to get the project off the ground and all planning was postponed.

The New Princess Street Site.
In 1904 the company finally got a new place to build the laundry, on a site at New Princess Street, Abertillery. Plans were put forth for its construction and the project was given the go-ahead. A short while later the Steam Laundry was erected. The manageress was Miss Skottowe.

The Contractor and Architect.
The contractors were Messrs Richards & Co, Newport.

In August 1904 the company were looking to purchase 2 van horses at least 16 hands in height. 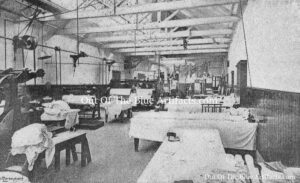 The Factories Act.
In May 1906 the Abertillery Steam Laundry Co were fined by the H.M. Inspector of Factories for allowing a Miss Gertrude Cooke to work more hours than allowed under the factories act. There were two similar charges respecting Miss Alice Williams and Miss Kate Williams. On average the girls were worked from 7.00am till 9.00pm they were working over 80 hours per week.

In 1909 the laundry (similar to the one in the image as seen right) was under the new management of Mr Herbert James Barnett and forewoman Mrs Bull. In the same year the manager was taken to court for overworking the girls who were employed at the laundry. The girls were Miss Lily Powell, Miss Elsie May Biggs, Miss Agnes Barnett, Miss Eliza Rogers and Miss Emily Bent. The court were told that the girls and women were working 14 hour shifts on a daily basis.

The Abertillery Steam Laundry employees held their annual social evenings at the laundry. It used to be fully decorated for the occasion and featured acts and other entertainments.

The Company Day Trips.
In September 1909 the employees had an outing to Cardiff where they later travelled by steamer to Weston super-Mare. The party numbering 70 had a group photograph taken on the beach, were entertained with tea, games and amusements all paid for by the company.

In 1914 the company opened a depot in the shop of Mr W. J. Jordan, Boot and Shoe Maker in Gladstone Street, Abertillery. The clerk for the company was Miss Lilian Perrott.

The Later Years.
I don’t know what year the Abertillery Steam Laundry closed though in later years the building was used for various trades.

Timber Merchant.
Also during the 1930’s Mr Davies a wood merchant used the old steam laundry building, I don’t know if he used the building as a workshop or just used it as a lock-up to store his stock.

The same month, a report off the Roads and Bridges Committee stated that the deputy clerk had reported – Correspondence between the council and Messrs W. Westover & Co showed that there had been difficulty with the present tenants of the old laundry building. A settlement had been made with Mr Davies the wood merchant and an offer had been made to Mr Ayliffe acting on behalf of the New Era Laundry Company on condition alternative accommodation could be arranged.

The Westover “Ultra Works” Abertillery was a wheelbarrow manufacturing factory. The company took over the building of the old steam laundry and one of its early managers was Mr H. Rungey. In March 1946 Mr Rungey left his post for a job in Ireland and was succeeded by Mr H. Pearman. By 1948 Mr John Alan Taylor was manager. At this time the factory were producing wheelbarrows and exporting them as far a Columbia, South America.

In 1948 the workforce was twenty-four male workers and one female by the name of Mrs Edith Raiment of Gray Street, Abertillery. The Westover Company also had a large shed opposite their main building on the other side of the main road, it was part of the works and used to hang and dry newly painted wheelbarrows and other manufacturing items. This shed was later used as a garage and lock-up.

In the early 1950’s lack of materials forced the company to close.

Proposed Fire Station.
In November 1952 the South Wales Gazette reported on the old Westover & Co factory being considered as a fire station. The report was as follows – The County Fire Officer and the County Planning Officer recently visited Abertillery looking at sites for the proposed three-bay fire station, they decided that the former wheelbarrow factory would make an ideal site. This recommendation was put on hold as in the mid 1960’s the new fire station was built at its present site at Station Hill, Abertillery.

In March 1956 the factory employed just three men, a manager, a foreman and one general worker.

In December 1958 the London Gazette reported that the Messrs W. Westover Ultra Works Ltd of Barking, Essex were in receivership. The factory on Richmond Road was cleared out and became derelict.

The Bryn Hammond warehouse was opened as a “Cash & Carry” on Monday 31st August 1964.

In the early 1990’s the building was demolished and the site was used to build houses upon.