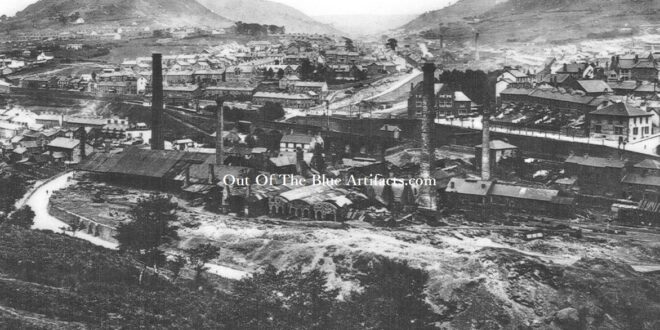 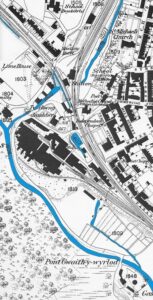 When the tin works were installed a feeder stream to power the water wheels at the works was constructed. Its course was from a sluice in the River Ebbw close to Spiders Castle (where Harcourt Terrace is today) to the works via the fields (where Glandwr Street is today) across the front of the Station Hotel and down into another sluice at Station approach, the sluice could divert the water back into the River Tillery at this point if the pond was full.

This feeder kept the pond full of water to power the tin works machinery. It’s hard to believe but the sluice for the feeder at Spiders Castle was 36′ feet higher above sea level than the tin works. This height difference maintained a constant forceful flow to the pond. When Glandwr Street was built the feeder was covered over and the houses were built over it. 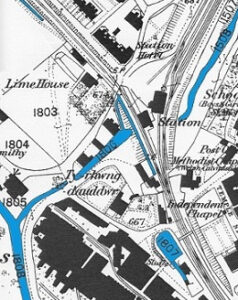 Right is an enlarged view of the sluice in front of the Station Hotel.

In 1850 Mr John Conway announced he was paying his workforce in the coin of the realm and would not entertain the idea of issuing Truck Tokens. In the same year he offered free train fare to his workers to go shopping at Newport or Bristol (employees choice) once a month.

Bar Iron.
In 1866 it was announced that the Abertillery Tin Works were producing their own bar-iron.

Mr John Matthews.
In November 1870 the Star of Gwent newspaper reported that Mr John Matthews had rolled iron at a weight of 3cwt hundred-weight without any break or damage to the piece. On the 1871 census Mr Matthews a tin works labourer lived with his wife Sarah? and family at Matthews Houses, Abertillery close to the Golden Lion Inn on what is now Castle Street.

Major Phillip Samuel Phillips.
In 1872 after the bankruptcy of Mr Pearce, the tin works were purchased by Mr P. S. Phillips. Major Phillip Samuel Phillips also owned the Coedcae Tilllery Coal Levels (where upper Arael View is today) and used the coking ovens on site to supply the tin works (the coking ovens were close to where the Rose Heyworth Millennium School is today). Major Phillips was a keen cricket supporter and gave the Abertillery Cricket Club use of his land at Glandwr (called Captains Field) to use as their ground, this ground was later purchased by a housing company to build Glandwr Street.

The Rolling Mills.
In 1876 the tin works had six rolling mills in operation.

In 1893 the tin works had nine rolling mills in operation.

Mr Arthur Tilney.
In 1900 Mr A. Tilney formed a company to take over control of the works. The works now had ten rolling mills, five sets of cold rolls and fourteen tinning sets. Mr A. Tilney was also a timber merchant, his timber business became one of the biggest in South Wales.

Productivity and Sales.
At one time the Abertillery Tin Works employed four-hundred men and fifty girls. The workforce produced 350,000 tin plate boxes for the home market which included names such as Fry’s, Cadbury and Nestles Co and manufactured tinned plate for dry and wet goods for export around the world such as South Africa, Jamaica, India and New York. Competition from much bigger companies forced the tin works to close.

The Demolition of the Smoke Stacks.
On Saturday 6th June 1959 three of the old tin works smoke stacks were demolished by explosives. The residents complained they had hardly any prior notice and were caught off-guard with the resulting blasts smashing windows at Forge Row and Glan Ebbw Terrace, it was said that only the far end of the rows escaped damage. One woman was bed-ridden and the explosion blew her out of bed and onto the floor.

In 1925 the Abertillery Iron Foundry closed.

In 1940 the government asked Warwills Foundry and Engineering Works to make agricultural machinery and tank parts for the war effort.

In 1959 the foundry employed 70 people and expanded down to the now derelict tin works site at Station Rd. The foundry behind Church Street became its engineering department while the old tin works site was used to make its castings.

In 1989 Abertillery Holdings moved its head office to Bristol.

The Bawn Bros.
In 1992? the Abertillery Foundry was owned by Bawn Bros.

In 1997 the Bawn Bros moved all operations to Aberbeeg and incorporated with Blackwood Engineering. They then sold the Abertillery site to Tesco Supermarket.