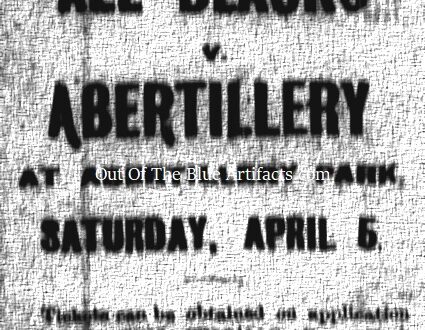 Abertillery v The New Zealand All Blacks Army Rugby Touring Team – April 1919.
During WW1 many rugby football team members enlisted and signed up to serve their country. At the same time the sport of rugby at club and country level was suspended, though survived through Inter-Service and Allied Forces Matches. As the war came to an end most teams were affected by the loss of many players who were either killed or maimed on the battlefields. Some club teams looked to play international teams as a way of moral boosting and re-building at this time.

In 1919 the New Zealand All Blacks Army Rugby Team toured Great Britain, France and later in the year South Africa. The Great Britain and France tour took in 38 matches, the All Blacks Army Touring team consisted of 41 players, 19 of those were internationally capped as an All Black before, during or just after the tour. The colonials won 33 games during the tour, drew 3 (Royal Naval Division at Devenport, Cardiff at Cardiff and Pill Harriers at Newport) and lost just 2 games (Monmouthshire at Ebbw Vale and the Australian Imperial Forces at Bradford).

Abertillery v All Blacks 5th April 1919.
The game against Abertillery was match number 18 of the tour, played at Abertillery Park on Saturday 5th April. The score was 3-0 to the New Zealanders though surprisingly no proper match report is available in any local papers apart from a small clipping in the South Wales Gazette, in which it reported the following – Abertillery were unable to defeat the New Zealand combination which visited the park on Saturday. They had the satisfaction of giving their opponents an especially hard game, which they only managed to win with a finely placed penalty goal landed by Mr C. H. Capper the full-back. The defence of the homesters was magnificent and the New Zealanders were unable to cross the Tyleryites line, in this respect Abertillery maintained their reputation, for it will be remembered that when the Wallabies visited the town several years previous they too were unable to score other than through the medium of a penalty. The report stated the All Blacks were a quality team and gave the ball air, the home team could not begrudge them of their victory.

After an excellent repast had been partaken of, the chairman extended a hearty welcome to the New Zealand team. He told of the hardships in the acquiring of suitable playing grounds in the valley and hoped the New Zealand teams had better facilities than that of Abertillery.

Lieut King, the manager of the All Blacks team spoke, he thanked all those present for the cordial manner in which they had received the toast. They had a good game and as good a reception as anywhere, not only by the players but everyone whom they had come in contact. He spoke of how he thought Abertillery were not a junior team and that they were as good a team as the New Zealanders had seen for quite a while, he added that they had never seen a better situated or more convenient ground anywhere. Lieut King then called upon the team to sing their stirring “War Cry” which they did in splendid effect concluding with three ringing cheers.

Mr J. T. Boots and Mr Lionel Lewis spoke on the honour of being in the presence of the great All Blacks team that day. Pte Richard “Dick” William Roberts, Captain of the All Blacks thanked the Council and the Club for their welcome, he said he was disappointed with the All Blacks play and that they could have played better than they did. He also praised the Abertillery team in their play and the fine show they put on along with their sporting like manner in which they took their defeat. Mr Jack Webb, Abertillery also referred to the great spirit in which the game was played.

The proceedings were terminated with a vote of thanks to the chairman, proposed by Mr E. W. Jones and seconded by Lieut King.

The Abertillery player Mr W. Morris was chosen to play for Wales against the New Zealanders a few weeks later on Monday 21st April 1919.