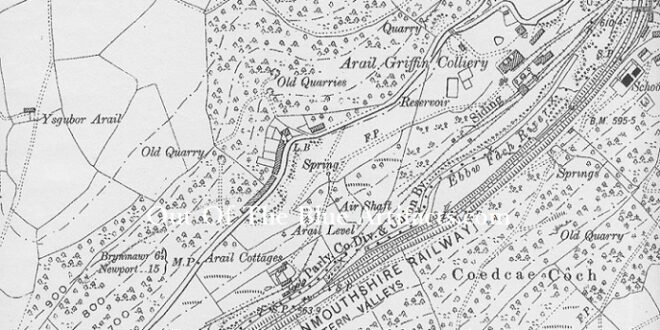 The Death of Mr Edward Nicholas.
In 1911 Mr Nicholas sadly passed away at 90 years of age.

Lancaster Coal Co.
Sometime later it was taken over by the Lancaster Coal Company, the reasons behind this is unclear though many mining companies seemed to purchase a farm that was close to their colliery as a secure place to keep their pit ponies, horses, other live-stock and feed etc. (More information below).

In 1918 and 1923 the Arael Farm Coal Level was still owned by Messrs J. Lancaster Co though it didn’t employ anyone and it was not listed after.

The Arael Farm Level was uncovered when the waste tip from the Vivian Colliery and the Six Bells (Arrail Griffin) Colliery at the top of the Arael Mountain was removed and the coal in it recycled along with coal newly removed by opencast mining in a project started in the mid 2000’s.

There was a court case in the early 1900’s where someone had stolen a sheep from the Gwrhyd Farm and the magistrates heard the sheep had belonged to Messrs J. Lancaster & Co.