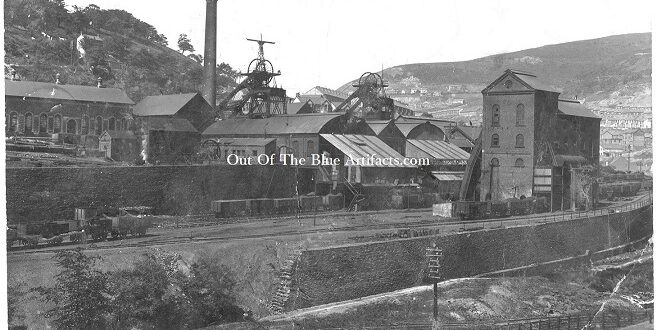 Arrael Colliery, Six Bells Colliery – Fatalities 1890-1988.
This list of deaths that occurred at the Arrael Griffin Colliery, Six Bells covers most of those reported in National and Local Newspapers. The first deaths occurred during the sinking of the No.4 & No.5 shafts at the colliery and are covered in detail on another page, though they are listed below for reference.

This page is fluid and will be updated as more information is received.

The Second Sinking Fatality.
In April 1895 another accident occurred in the shaft at Arrael Griffin Colliery Six Bells, Abertillery resulting in the death of a chargeman.
Mr Eli Morgan, aged 36. Died – April 1895. Cause of death – An accident in the shaft, Mr Morgan was fixing pipes when the bowk caught and he fell down the shaft.

The Third Sinking Fatality.
On Thursday 2nd May 1895 a serious accident occurred at the Arrael Griffin Colliery Six Bells, Abertillery. Two sinkers named Mr Herbert and Mr Kyle were seriously injured by a fall of the side in the shaft, It was reported Mr Jacob Kyle was slightly injured though Mr James Jacob Herbert was conveyed home where he succumbed to his injuries four hours later.
Mr James Jacob Herbert, aged 40. Died – Thursday 2nd May 1895. Cause of death –  Fall of rock in the shaft. Mr Herbert lived at 74 Edward Street, Blaenau Gwent, Abertillery.

Coal Production Deaths.
Listed below are the fatalities reported at the Arrael Griffin Colliery Six Bells between 1897-1988. The list is fluid and will be updated as more information is received.

1899.
Alfred James Walden, aged 35. Died – Thursday 28th September 1899. Cause of death – Fall. The death of Mr Walden was the first death at the colliery during coal production.

1905.
Mr Benjamin Adams, aged 60. Died – Saturday 1st July 1905. Cause of death – Mr Adams fell from the ascending cage and broke his back. Mr Adams lived at 57 Powell Street, Abertillery. As the men finished work and were loaded into the cage to come up the pit, a warning was given that there was a run-away journey heading towards pit bottom as the cage started to rise, the men in the cage panicked and tried to jump clear resulting in four men being injured from the fall from the ascending cage. Mr Adams later died from his injuries with a Mr George Loughman also being seriously injured though survived. Two others were hurt and were able to walk home. It was later stated that the journey of drams did run away but they were under control, it was seen as a false alarm.

Mr Francis John Gilbert, aged 23. Died – Monday 20th November 1905. Cause of death – Mr Gilbert was buried beneath 500 tons of stone after a heavy roof fall. Mr Albin George Sweet of Blaina Road, Abertillery was with the deceased and was also buried though was pulled out alive. It was more than 24 hours later that the body of Mr Gilbert was recovered owing to the succession of falls. Mr Gilbert lived with his parents at Warm Turn, Six Bells, Abertillery.

Mr Edgar Blacker, aged 22. Died – Monday 25th December 1911. Mr Blacker had been injured in an accident in the previous July where he badly strained himself and never really recovered. Mr Blacker was married to Mrs Rachel Novello Blacker and lived at Gilfach Cottage, Cwmnantygroes, Six Bells.

Mr Edmund Charles Albert Peterson, aged 22. Died – Monday 3rd November 1913. Cause of death – Fall. Mr Peterson was reported to have broken his back and was in a serious condition with no hope of survival, though no official death report Mr Edmund C. A. Peterson’s death was registered in the following March 1914. Mr Peterson lived at 10 Penygraig Cottages, Six Bells, Abertillery.

Mr James Taylor, aged 53. (Arrail Griffin) Died – Friday 20th November 1914. Cause of death – Mr Taylor was a mason working on the surface buildings, he was knocked off the roof and died. Mr Taylor lived at Queen Street, Abertillery.

1916.
Mr Henry Payne Voyce, aged 16. Died – Tuesday 11th January 1916. Cause of death – Mr Voyce was crushed by a haulage rope while taking the journey into the work place. Mr Voyce was the son of Mr Jonas Voyce, an ex-police constable and resided with his parents at Scotia House, Six Bells, Abertillery.

Mr George Lee, aged 77. Died – October 1918. Cause of death – Crushed by a railway wagon on the sidings at the surface of the colliery. Mr Lee was a plate layer.

1921.
Mr Benjamin Williams. Died – Saturday 5th February 1921. Cause of death – Mr Williams was a rope-man and was crushed in a haulage engine while trying to keep the rope on the haulage drum in coil. Mr Williams lived at 4 Griffin Street, Six Bells, Abertillery.

1926.
Mr Leslie Clifford Emes, aged 21. Died – Monday 4th October 1926. Cause of death – Mr Emes fell through the roof of the fitting shops on the colliery surface while changing the metal sheeting. Mr Emes was living at 7 Duffryn Row, Penybont, Cwmtillery.

1927.
Mr Richard Hagland, aged 56. Died – Saturday 5th February 1927. Cause of death – Mr Hagland lost an eye in an accident at the colliery on the previous 24th March 1926. He never really recovered and the accident brought on a series of epileptic seizures with resulted in his death.

1928.
Mr Arthur James Moore. Died – Tuesday 10th January 1928. Cause of death – Believed to have been from complications as of an accident received on November 15th 1917. Mr Moore was a victim of a fall of stone which fractured his skull. He had returned to work on light duties but failed to properly recover. Mr Moore lived at 11 Partridge Road, Llanhilleth.

Mr Richard Jones. aged 65. Died – Saturday 4th August 1928. Cause of death – Crushed by a journey of drams. Mr Jones lived at 5 Llwyn-On Road, Six Bells Abertillery and had worked at the Arrael Griffin Colliery since 1897.

1930.
Mr James Gibbons Fear, aged 66. Died – Tuesday 11th March 1930. Cause of death – Crushed by a journey of drams. Mr Fear lived at 8 Park Place, Abertillery and had been working at the Arrael Griffin Colliery since it opened and had been a member of the sinking team at the Vivian Colliery, Abertillery.

1937.
Mr William Thomas James, aged 27. Died – February 1937. Cause of death – Mr James was severely crushed by a journey and was taken to the Abertillery and District Hospital, it was decided to operate though Mr James died from his injuries. The doctor said it was one of the worst cases of internal crushing that he had ever saw. Mr James lived at 100 Tillery Road, Abertillery.

1940.
Mr Thomas Reynolds, aged 70. Died – Friday 12th July 1940. Cause of death – Cerebral Haemorrhage. Mr Reynolds had received a blow to the head on Thursday 27th June 1940 though carried on working, he died on Friday 12th July while still working below ground, the coroner stated the haemorrhage was from the blow previously received. Mr Reynolds lived at 9 Victoria Road, Six Bells, Abertillery.

Mr William James Harris, aged 37. Died – September 1946. Cause of death – Mr Harris severely strained himself at the colliery and was taken to the Abertillery District Hospital where he died from his injuries a few days later. Mr Harris lived at 26 Under Houses, Princess Street, Abertillery.

Mr Williams died during the great snow storms of March 1947 and a report from the South Wales Gazette dated Friday 14th March 1947 states that the Arrael Griffin miners had volunteered to clear the snow-blocked road to Cwmtillery Cemetery so that their workmate Mr Williams could be buried. They were joined by hundreds of men, women and children who cleared a path for over two-miles in length. This feat which began on Friday, and carried on during Saturday and Sunday was seen as one of the most remarkable community efforts in the history of Abertillery.

Mr Ronald Herbert George Light, aged 38. Died – Thursday 21st October 1948. Cause of death – Fall. Mr Light was trapped by a fall, two of his colleagues – Mr Ernest Victor Harding and Mr Arthur Bobbett worked hard to free their companion. Such were the courageous efforts of Mr Arthur Bobbett he was commended for his his actions and was to be recommended for a bravery award. Mr Light lived at 9 Mount Pleasant Bungalows, Llanhilleth.

The previous month Mr Bobbett was involved with the attempted rescue of Mr Ronald Herbert George Light (as seen above) in which he was put forward for a bravery award. Sadly before this honour was carried out just weeks later Mr Bobbett himself was fatally injured in a similar accident.

On Saturday 10th September 1949 Mr Arthur Bobbett was posthumously awarded the Daily Herald “Order of Industrial Heroism” award, The Edward Medal for Gallantry and the Carnegie Award, the awards were received by his wife and son at the Abertillery Council Chambers.

Mr John George Clark, aged 59. Died – Friday 15th September 1950. Cause of death – Accidental death. The inquiry stated that the cause of death was inconclusive as the evidence was not clear and the news papers even reported that it was a mystery. Witnesses confirmed that Mr Clark was found underground laying on the ground close to a horse and dram, he had suffered a fractured skull and other injuries but they couldn’t say for certain what had killed him or how he had died. Mr Clark lived at 98 Arrail Street, Six Bells, Abertillery.

1955.
Mr Charles Henry Evans, aged 40. Died – Monday 14th February 1955. Cause of death – Fall. Mr Evans lived at Bron-y-Bryn, Sofrydd, Crumlin. During the rescue attempt Mr Melvin Bryant of Winifred Terrace, Cwmtillery was injured by a second fall though luckily was rescued and taken to the Abertillery and District Hospital for treatment to his injuries.

1958.
Mr Michael Redvers Burnett, aged 18. Died – Tuesday 21st January 1958. Cause of death – Crushed by a journey of drams. The coroner stated the exact nature of how Mr Burnett was hit by the journey remained a mystery. Mr Burnett was a trainee electrician and lived at Forest Lodge, Aberbeeg.

Mr Arthur Sidney Berryman, aged 50. Died – Monday 21st December 1959. Cause of death – Collapsed and died whilst underground at the colliery.