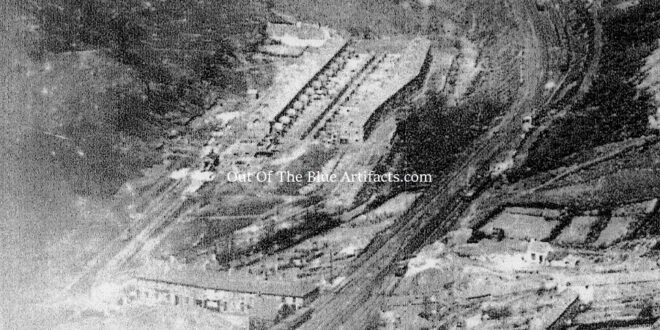 Arrail Street, Griffin Street and Lancaster Street – Six Bells.
The houses on Arrail Street, Griffin Street and Lancaster Street were constructed over a period of about 5 years from 1898 to 1903. The housing scheme was under the direction of the Messrs J. Lancaster & Company through the Arrail Griffin Building Club. The architect was Mr Charles Telford Evans, the contractors were various builders contracted to Mr Charles Telford Evans working to plans submitted by him. The general foreman was Mr Daniel Cottrell of Six Bells on a wage of £2. 10s. 0d. per week, equivalent to £300 in today’s money. 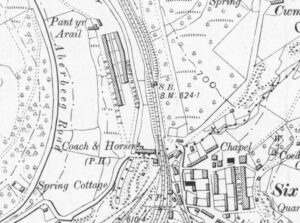 In October 1898 some of the completed houses at Arrail Street and Griffin Street were for sale.

In 1900 Mr Charles Telford Evans invited tenders for the erection of the other batch of houses on both streets, the houses on the western side of the street were started from the Pant-yr-Arael Farm down.

In May 1901 the first batch of the houses on Lancaster Street had been completed, occupied and were put up for sale at auction in the following November. The auction was conducted by Mr Thomas Buckley and held at the Bush Hotel, Abertillery. The sales sheet stated they were newly built and that there were 8 completed houses for sale which contained the following tenants – Number 2 Mr James Dobbins; 4 Mr Phillip Sullivan; 6 Mr John Moore; 8 Mr George Walker; 10 Mr George Watkins; 12 Mr H. Taylor; 14 Mr Thomas Matthews and 16 Mr George Bevan: It was stated the leases on these properties started on the 31st May 1901.

I believe the properties that went to auction were withdrawn, as in July 1902 the same lots at Lancaster Street, Six Bells went up for sale again, this time the auctioneer was Mr Fred W. Brett and the sale was held at the Bush Hotel, Abertillery on the 28th July 1902.

In February 1903 three shops and premises were advertised to let at Arrail Street, Six Bells. 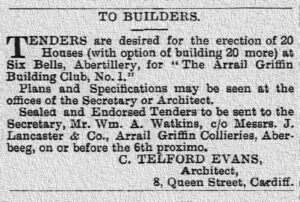 In June 1903 Mr Telford Evans invited tenders for the construction of more houses at Six Bells.

In July 1903 another batch of houses were for sale at Lancaster Street, Six Bells. The auction was held at the Globe Hotel, Abertillery and conducted by Auctioneer Mr W. H. Hiley. There were 3 houses for sale which contained the following tenants – Number 2 Mr Norton; 38 Mr James Newbury and 40 Mr R. Morgan. The properties were all let at 10s. per week. It was later reported that house number 2 was sold to Mr Norton the occupier for £208, equivalent to £23,296 in today’s money. It was said that though there was a very good attendance at the auction the other two lots, numbers 38 and 40 went unsold as they didn’t reach their reserve and was therefore withdrawn at £190 and £210 respectively. 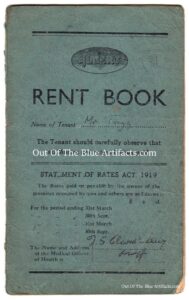 In September 1903 Mr Charles Telford Evans invited tenders for another batch of houses to be constructed on Lancaster Street, Six Bells. He had applied for 20 houses to be built for the Arrail Griffin Building Club.

In April 1904 the villa on the corner of Lancaster Street, Six Bells was put up for sale at an auction held at the Viaduct Hotel, Crumlin. The villa did not reach its reserve and was withdrawn at £375.

In November 1905 Mr Charles Telford Evans put a shop and grocery business up for sale at Arrail Street, Six Bells. The trade was reported to be about £35 per fortnight, the equivalent to £3,900 in today’s money.

Tenants Rent Book.
The rent book of Mr Albert Trigg (as seen above right) of 31 Arrail Street, Six Bells, my wife’s great-grandfather. The book is dated mid to late 1930’s.

The Fire of 1905.
On Friday 1st December 1905 the South Wales Gazette reported that a fire had broken out in Arrail Street, Six Bells, Abertillery and had caused 3 shops and 2 adjoining houses to be burnt down. The fire had broken out in the early hours of the previous Sunday 26th November 1905. The report stated P.C. Griffiths was on duty in Blaenau Gwent, on an elevation from where a view of the whole district could be obtained, he noticed signs of a fire and passed the word onto P.C. Quinton. P.C. Griffiths then made his way to the fire station while P.C. Quinton proceeded to Six Bells calling at the police station on the way. Inspector Lewis, Sergeants Hatherall and Edwards with a strong posse of constables were soon at the scene, followed quickly by the fire brigade under the directions of Captain Pittaway.

The fire was raging, with the shops – Number 50, occupied by Mr Walter Lane a greengrocer, number 48 a lock-up shop, proprietor Mr Samuel Turner, a grocer and number 52 a beer-store, proprietors Messrs W. Hancock & Co, being in a mass of flames. The houses each side, numbers 46 and 54 were also alight. The three shops were the property of Mr Charles Telford Evans and the houses were the property of Messrs J. Lancaster & Company.

By 6.00am the fires had been put under control, the shops and houses were totally destroyed. It was believed the fire had started from clothes drying in front of a banked-up fire in one of the shops. The report stated that during the time of the fire a great deal of pilfering occurred from the shop of Mr Samuel Turner. One local man was arrested on the spot for stealing a tin of Rabbit Meat valued at 6d. and at his hearing at the police court it was stated that the group of locals involved were pilfering from the shops as they burned, well before the police and fire brigade arrived on the scene.

A Planned Extension of Lancaster Street.
In November 1909 Mr G. Smith applied for planning permission for an extension of Lancaster Street, Six Bells and to erect 25 houses upon it. The application was deferred until a later date as the council wanted a guarantee that the road would be repaired before any further building work could be contemplated.

The Gas Explosion of 1935.
On Friday 15th November 1935 Mr and Mrs Thomas Hardy of 87 Arrail Street, Six Bells miraculously escaped death when a gas explosion ripped through their home. A report in the South Wales Gazette stated Mr Hardy had been bending over the gas meter after putting in a penny when the explosion happened. The blast was so severe residents were on their way to the colliery fearing a disaster. Reports said their home was blown to smithereens, walls and ceilings were brought down to the ground and many people though it was an earthquake.

After the explosion occurred, the first on the scene were two brothers Burt and Moses Martin who ran into the house in an attempt to rescue the elderly couple. Mr and Mrs Hardy had been pinned beneath the wreckage and with the help of other neighbours, the couple were released. Dr R. W. Scanlon P.S. L. Moore and P.C. R. Jones arrived at the scene after which Mrs Hardy was conveyed to the Aberbeeg Hospital with a fractured foot, severe shock and other injuries. Mr Hardy received lacerations and shock, though was treated at a neighbours house.

Later Alderman W. T. Williams, Councillors E. G. Leach and H. V. Phinnemore of Six Bells issued an appeal for subscriptions to a fund that was devoted to the restoration of the house, furniture and effects of Mr and Mrs Thomas Hardy. In December the sum of £17. 4s. 3d. had been raised, Mr William Saunders and Mr W. H. Hillman were the official collectors. Mrs Hardy had been released from hospital though was still confined to bed, Mr Hardy was said to have recovered.

The following is a link to – The John Lancaster Story.

Points of Interest – Mr Charles Telford Evans was one on the leading contractors and architects in the area and was responsible for the construction of the houses at Railway Street, Partridge Road, Cae Felin Street and Meadow Street, Llanhilleth and also the Llanhilleth Central Hotel. Mr Evans Offices were at 8 Queen Street, Cardiff, he later moved his offices to Newport. Mr Telford Evans was also the architect for the Arrael Griffin Miners Institute on Arrail Street, Six Bells.

The Street names at Six Bells – Lancaster Street, was named after the Messrs J. Lancaster & Co. Arrail Street, more than probably named after the colliery and the Arael Mountain, Arrail Griffin and Griffin Street after the company’s association with the name of Griffin as in their collieries at Blaina – Griffin number 1,  number 2 and number 3 and again as in Arrael Griffin. Even though the name of Griffin was known in Blaina before the John Lancaster Company took the collieries over in 1878, the company adopted the name and had the mythical creature called the Griffin on their “coat of arms” which can be seen on many of the coal wagons and with a set of six-bells moulded in relief on the plaque over the entrance of their Workmans Institute, Arrail Street, Six Bells.

In 1901 the census showed the Coach and Horses Inn under the proprietorship of Mr John Esau. Next door was a doctors surgery with Dr Timothy Sullivan as resident Doctor. Next to the surgery was the Vivian Cottages occupied by Mr Howell Powell.

On the 8th May 1891 the John Lancaster & Co sunk the Arael Griffin Colliery. The company already had the number 1, 2 and 3 Griffin Collieries at Blaina and therefore named the Six Bells shafts number 4 and number 5. At the ceremony of the cutting the sod Mr John Lancaster Jnr cut the sod on the first shaft and Mr Charles T. Part, director of the company cut the other.

In November 1892 Messrs John Lancaster & Co opened a brickworks at Blaina and Mr John Swinburne became the manager of the works. These red engineering bricks were used by the company and also sold to the public contractors in the area. The many houses associated with the Lancaster Company were constructed with these bricks.

The Coach and Horses Inn.
The Coach & Horses Inn, Chapel Road, Six Bells, was originally called the Coronation Tavern and established between 1830 and 1840. The tavern was situated close to the railway line where the subway is today. It was called the Coronation Tavern on the 1840 land maps and also known as such on the 1841 census though had changed its name to the Coach and Horses Inn shortly after.

In 1871 during the widening of the Newport to Nantyglo Railway, the Coach & Horses Inn was in the way of the planned doubling of the lines on the railway network and had to be demolished. The landlord at this time was Mr David Esau. Mr Esau planned to have the Coach & Horses rebuilt just a short distance away, closer to the River Ebbw, his wife applied for a temporary licence to sell alcohol from another house until the rebuilding was completed.

Ty Ebbw Vach.
The Coach & Horses Inn was ideally located to take advantage of a good trade from the early coal level workers and later the miners at the Arael Griffin, Six Bells Colliery workforce and many locals. The Coach and Horses Inn closed as a pub in the early 2000’s and was recently converted into the Ty Ebbw Vach Communities First Building and Cafe.