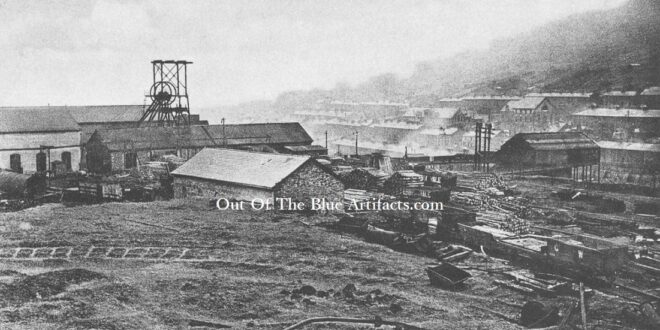 Beynons Colliery – Blaina
In early 1920’s the collieries of Blaina that had been previously owned by the Messrs J. Lancaster Co had not mined coal west of the River Ebbw. The company needed a new mine capable of retrieving the coal from that side of the valley.

Mr Jenkyn Williams.
In 1920 Mr Jenkyn Williams M.E. submitted a scheme for the sinking of a new pit on the site of the old Pyle and Blaina Works yard. The new colliery would mine the new coal from the west and the company would close the other collieries in the vicinity – The Lower Deep, Henwain and the North Blaina Colliery and also mine the remaining coal from those pits.

In November 1921 the construction of the Beynons Colliery began, the old site had to be demolished, four tall chimney’s were removed along with the old coke ovens etc. By the following April the site was cleared and foundations for an engine house was laid. Unusually there was no ceremony of cutting the sod.

The Sinking Procedure.
The 20′ foot diameter shaft pattern was cut out by the sinking team and the first few yards were sunk with the assistance of a ten-ton crane. As the new electrical winding engine wasn’t ready, an old steam winder was temporary installed to proceed with the sinking operations.

At a depth of 24 yards the pit-sinkers struck into the old workings of the Red Vein Ironstone seam which had been worked many years previous.  All the other main seams were passed through and tunnels driven from the North Blaina and the Lower Deep to enable all coal to be delivered to the pit-bottom of the new pit from those present workings. The Henwain Colliery had already closed by this time. It was projected that in the future, a cross measure drift be driven to reach new areas of coal.

The Official Opening.
On Friday 13th July 1923 the Beynon’s Colliery was officially opened. The directors and chief officials were all present for the occasion, and was watched by numerous spectators. Coal would be delivered to the new colliery pit-bottom from the other collieries and in due course these old pits would close. There was an estimated output of 1,500 tons per day.

On Monday 16th July 1923 the real start was made and the officials from the company were present to watch the dealing with the coal through the screens.

The Later Years.
The Beynons Colliery was taken over by the National Coal Board in 1947.

In 1975 Beynons Colliery, Blaina was closed after an underground fire broke out. The men were transferred to the other collieries in the district.