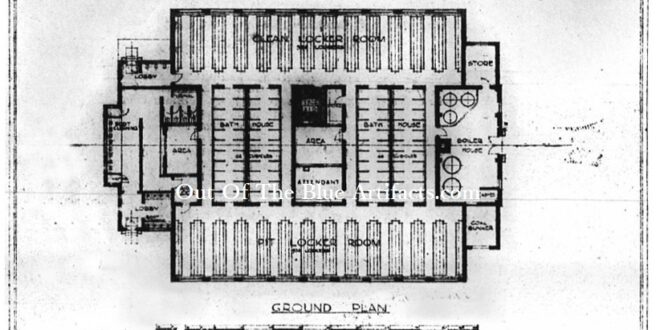 Mr W. H. Leigh remarked that “The baths were just a dream and that dream had come true” pit head baths were being opened throughout the country and the Beynon’s Colliery Baths were the one hundred and first to be opened. Out of that number four had been erected and two were in the course of being erected by the Ebbw Vale Company.

The Contractor and Architect.
The contractor was Mr Lovelock of Newport. The architect was Mr A. J. Trailler of the Welfare Fund Committee and Mr W. H. Gale was clerk of the works.

The Presentations.
Alderman W. H. Jones J.P., in the absence of Alderman W. Dunn J.P. miners agent, on behalf of the Baths Committee presented Sir John Beynon with a toilet-set, having accepted the gift Mr Beynon apologised for the absence of two of the directors of the company Mr David Allen and Sir Arthur L. Dickinson, who was also a member of the Welfare Fund Committee. The presentation was a welcome addition to an ivory set presented to him by Lady Beynon. Mr A. Lovelock the contractor also presented Lady Beynon with a handbag.

After the presentations and speeches the large company were entertained to tea by Sir John Beynon and his co-directors at the church institute, Sir John presiding. The artistes at the institute were Mr Tom Lloyd and Master Granville Reed a soloists and Mr David Jones the accompanist.

Description of the Baths.
The Beynon’s Pit Head Baths were erected by the contractor Mr A. Lovelock to the designs of Mr A. J. Trailler the architect of the Welfare Fund Committee. The building was described as being of the most modern type, built with red brick and fitted with shower baths. It was heated by hot air and separate lockers were provided for pit clothes and clean clothes. There was accommodation for cleaning and greasing pit boots, drinking water filling taps and a first aid room.

The Baths Attendants.
There were 130 applications for the positions of three bath attendants for the new baths at the Beynon’s Colliery. The wages offered was £2. 10s. 0d. per week. The Welfare Fund Committee appointed Mr John Dunn, Mr Leonard Chaffey and Mr Harold Chivers to the posts.

The Pit Head Baths story.
The idea of pithead baths in the United Kingdom had been mentioned as early as 1889 though they were not really seen to be taken seriously until just before WW1, though they were in use in Germany in 1891.

In October 1913 the matter received consideration of the Miners Federation and the miners at the Arrael Griffin Colliery, Six Bells had a meeting where the miners agent Mr W Brace chaired and tried to convince the workers that a pithead baths would really be in their interest and that the “Section 77 of the Coal Mines Act of 1911” enacts that if a majority of the men at a colliery wanted a baths the owners would have to make satisfactory provisions and build one, the cost would be shared, half by the owners and half by the men at a rate of no more than 1 farthing a day – 1 and a 1/2d. per week. A ballot would be held at a later date but Mr Brace hoped the men would agree and vote yes.

In June 1914 a report declared and reaffirmed the “Section 77 of the Coal Mines Act of 1911”, collieries exempt from this section of the act are those employing 100 men or less, those collieries whose leases terminate within 10 years or which are likely to be worked out within that time. The cost of maintenance must be shared and the management of the baths is entrusted to a committee of six, three representing the coal owners and three the colliers.
The report stated that the reason why there is lack of support for a pithead baths is that a very small proportion of miners have any notion as to what a pithead baths really are!  So a brief description may serve to dispel the wrong ideas which prevail as to the workings of the system.

Descriptive example… A miner proceeds to work in his ordinary suit, his working clothes are in the bath house, suspended by means of a chain passing over a pair of pulley’s near the roof of the building. To prevent his clothes being stolen each man is provided with a padlock and key. On entering the house the miner unlocks his padlock, his chain ascends and his clothes descends. He makes his necessary change in a private compartment, hangs his clothes to the hook at the end of the chain and hoists them to the roof and locks his padlock…. When he reaches the surface at the end of his shift he takes down his ordinary clothes and passes into a bathing cabinet – this is a compartment 5’ft 6″ins long by 3’ft 6″ins wide and 6’ft high. It is constructed of glazed brick or iron, the opening is screened by a waterproof curtain or a door. The cabinet is divided into two portions, the outer portion is for dressing or undressing, the inner for bathing operations to take place.

A sink connecting to a drain occupies the centre of the floor and overhead at a height of 7’ft-8’ft is the spray – a length of hot water pipe connected with the mains and terminating in a rose 4″ins-6″ins in diameter. The spray is provided with a valve manipulated by either pulling a cord, pressing a lever or turning a wheel. When this valve is opened the bather receives a shower bath. He lathers himself with a small bar of soap provided by the coal company, 1 bar per man per day. After his bath he dries himself with a towel provided to him one per week or whenever deemed necessary. He then proceeds to the dry section of the cabinet and finishes dressing. There are to be one cabinet for every 6 men employed on the maximum shift and the time taken in the cabinet is no longer than 5 to 7 minutes, when he has finished he hoists his dirty clothes to the roof and they are dried by the hot air of the baths before his next shift begins.

The pithead baths campaign had every confidence that even larger percentages would be recorded in South Wales once the system came into general use. The need for the moment is for an active propaganda to be carried on in it’s favour and was desirable that the Miners Federation should initiate the educational campaign so that its members may be in the position to take the necessary steps to put “Section 77” into full operation.

This campaign seemed to come to a halt as war broke out in 1914 and was re-started in 1920, urged on by many women’s organisations, after the war there were many stoppages and discontent in the coalfield and I can’t find out much about its progress until 1931 when Rose Heyworth Colliery leased by the Ebbw Vale Company opened the first pithead baths in the Western Valley’s. At this time there were fifty-four such baths being contemplated and only five completed with Rose Heyworth being one of those five.