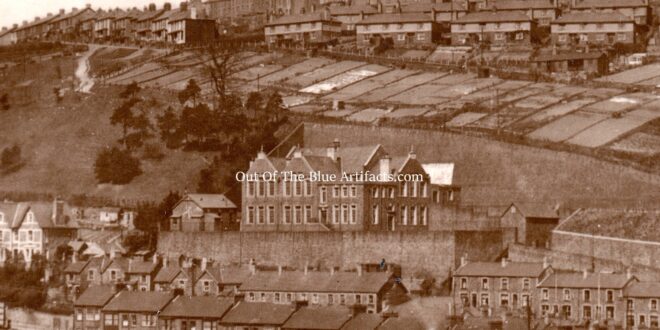 Brynhyfryd Secondary School – Llanhilleth.
The planning for a school at Llanhilleth was first debated in June 1902, a committee was set up to visit various sites and to report back to the authority. The Education Authority were looking to build a school at Cwmcuffin and it was to be known as the Cwmcuffin School.

Tenders.
In March 1905 tenders were invited for the construction of a school at Cwmcuffin, Llanhilleth, to be known as Cwmcuffin School. Plans could be viewed at the offices of Messrs Swash and Bain F.R.I.B.A., architects and all tenders to be sent into Mr C. W. Carpenter the Abertillery Education Secretary.

The Site for the New School.
In April 1905 a site, (as seen in the main featured image above) had been chosen at Cwmcuffin, Llanhilleth.

The School’s Name Change.
In December 1906 the name of the school was changed from Cwmcuffin School to Brynhyfryd School, there was no apparent reason behind the name change.

Mr J. Rowland.
On Friday 18th of January 1907, Mr John Rowland was appointed headmaster. Mr Rowland was the headmaster at the Llanhilleth Old School though would be transferred when Brynhyfryd School was opened.

The Official Opening.
Sadly, there is no known exact date or newspaper report on the official opening of the Brynhyfryd School Llanhilleth. On Friday 25th January 1907 a report on its progress stated that the school would be shortly completed and would be open in five weeks. Although in a report later in the year Mr John Rowlands the headmaster was transferred in September, so it seems that the school was opened for the September term.

The Contractor and Architect.
The contractor was Mr David Lewis and the architects were Messrs Swash and Bain.

Mr John Rowland and Mr James Davies.
On Monday 16th of September 1907, a presentation was held at the Brynhyfryd School for Mr John Rowland and Mr James Davies, on the occasion of them leaving the Llanhilleth Old School and taking similar posts at the Brynhyfryd School, Llanhilleth. Mr John Rowland was made the recipient of a gold-mounted umbrella and a silver-mounted walking stick, while Mr James Davies was presented with a meerschaum pipe and case and a silver cased fountain pen. The presentations were made by Mr Trevor Williams on behalf of the senior scholars of the Council Schools.

Damage to Upper Court Terrace.
In December 1907 it seems that work on finishing the grounds of the school was still being carried on as it was reported that a fall of earth from the site fell onto Upper Court Terrace, complaints were heard as some houses were slightly damaged. So, it is a little confusing.

The Retirement of Mr J. Rowland.
On Friday 30th of September 1927, Mr John Rowland retired as headmaster of the Brynhyfryd School, Llanhilleth. His brother Mr Edward Rowland took over as headmaster.