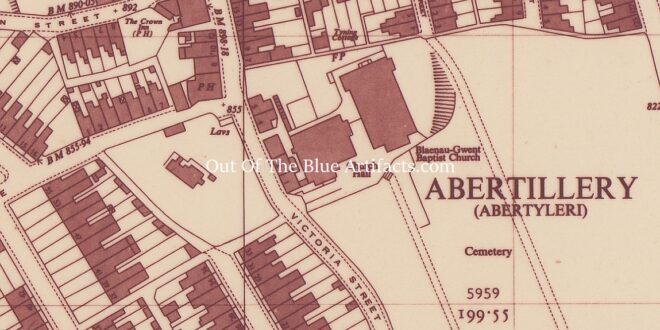 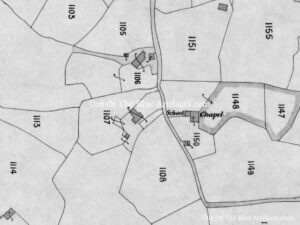 The Clyn Mawr Ganol is seen (centre-left) on the 1840 map, also seen on the map is the original Crown Inn (above) the farm and the Blaenau Gwent Baptist Church and School to the (right). The main road running down through is what is now Victoria Street and branching off to the right is what is now Preston Street, which was at that time the main thoroughfare up through Blaenau Gwent to the Manse, Ty Dan-y-wal and Cwmtillery beyond.

Messrs J. & C. Bailey owned the land at Clyn Mawr Uchaf and leased it to Mr Thomas Rogers, they also owned Clyn Mawr Isaf which was leased by Mr William Edmonds, while Mr Edmund James owned the land upon which Clyn Mawr Ganol stood and quite a large area around it which was passed onto the family, mainly his son Mr Alexander James.

The history of its residents is a bit unclear, as on a few early censuses the name Clyn Mawr Ganol is not written down, and the farms and cottages at Blaenau Gwent were not named and were often misreported. Though it seemed to have been the home of Mr Edmund James and family. Mr James was coal level proprietor and colliery Agent. He owned the land around the area from Clyn Mawr down to Gladstone Street and Portland Street area and Mr Thomas Brown Esq of the Nantyglo and Blaina Co owned the land from Clyn Mawr up through where the Blaenau Gwent Rows was later built and on into Blaina, which later passed into the hands of the South Wales Colliery Co and later other various estates

The newspaper clipping (above right) proves that Mr Edmund James was living at the Clyn Mawr Ganol (middle farm) throughout the 1800’s, The clipping is from the Welsh Newspaper called the Seren Cymru and this piece was printed in November 1862. The census enumerators, as suspected, got their farms mixed up while compiling the various censuses of the Blaenau Gwent area in the mid to late 19th century.

Mr Edmund James was a land owner of much of Blaenau Gwent, at Brynteg and also the Rhiw Park area. In 1854 he gave land for the access road to be constructed into the British School at the time it was being built. I believe James Terrace and James Street could have been named after him?

At Blaenau Gwent in 1851 the census shows Mr John Jones and his wife Magdelene Jones lived at the Ganol, though this is a bit unclear as they were also living in a cottage which later become the Crown Inn, that was also a farm at this time and may have been mistaken for the Ganol. A few of the prominent families in Blaenau Gwent seemed to move about a bit between censuses or maybe the census enumerators, as mentioned just got the names of the premises mixed up?

In 1851 Mr Edmund James, his wife Ann and children lived at Blaenau Gwent next door to Chapel House, Clyn Mawr, at this time Mr James was still listed as a colliery agent.

In 1867 Mr Edmund James and his son Edmund James junior held the lease to mine coal and quarry stone at the Rhiw Park area, Abertillery. They had the lease from the Brynmawr Iron & Coal Co.

Mr Alexander James and family left Abertillery in the late 1880’s to reside at Monmouth. Upon their departure Rev Thomas T. Evans took residence at the Clyn Mawr Ganol, Rev Towy Evans was the Baptist Minister who had come to Abertillery in 1882, he was living at the Manse Ty Bryn, though what he was doing at the Clyn Mawr Ganol in 1891 is a mystery.

In the late 1890’s Mr William Roderick Haylings and family were living at the Glyn Mawr Ganol.

Mr William Roderick Haylings was originally from Cheltenham, he was a printer by trade, his father before him and his grandfather Mr Thomas Willey was said to have been the first printer at Cheltenham. Before coming to South Wales Mr Haylings had travelled the length and breadth of the country in connection with his employment.

In the mid 1890’s Mr W. R. Haylings came to Abertillery and was manager for Mr Alf Durrant the owner of the South Wales Gazette based at Carlyle Street. Mr Durrant owned and edited the paper while Mr Haylings printed it. In 1896 Mr Durrant retired, Mr Haylings bought the business and the printing works which was later moved into Carmel Street Abertillery. The Hayling family moved into Clyn Mawr Ganol at Blaenau Gwent. 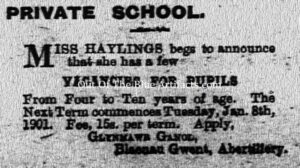 In 1902 Mr William Roderick Haylings sold the South Wales Gazette to Mr P. Wilson Raffan and left the area to live at Pontypridd.

The Death of Mr Alexander James.
In January 1900 Mr Alexander James passed away at his residence at Monmouth. His body was taken by train to Abertillery where he was buried at the Blaenau Gwent Baptist Church. Rev Thomas Towy Evans was back living at the Manse, Tyr Bryn.

In the early part of the 1900’s the grounds of the Clyn Mawr Ganol was used for the backdrop of many sporting team photographs.

Mr and Mrs Charles Diamond Williams.
In 1904 Mr Charles Diamond Williams passed away and his obituary stated he was living at the Clyn Mawr Ganol as a grocer, he had been a baker under Mr Titus Phillips. After his death Mrs Margaret Williams continued to live there with her sons Mr Charles Albert Williams, born 1884 employed as an out-rider for the Co-operative Society and Mr Lewis Edgar Williams, born 1886 a colliery engineer.

In 1931 Mr Charles Albert Williams and his family were still living at Clyn Mawr Ganol. In this year his son Master Albert James Williams 11 years of age won a free scholarship into Cirencester Grammar School, tenable until 19 years of age.

In the mid 1930’s a Mr Jones was renting the Clyn Mawr Ganol though it later came into the possession of the Oulton family and in 1936 the proprietors of Clyn Mawr Ganol were listed as being Mr Llewellyn Oulton and Mr Geoffrey Oulton.

In 1936 Mr and Mrs Llewellyn Oulton and his family were living at Clyn Mawr Ganol. The house can clearly be seen (centre) of the image below, surrounded by trees. 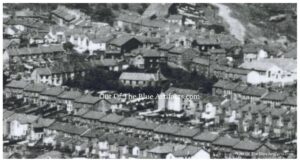 In 1925 the Oulton family were living at 31 Granville Street, Abertillery.

In June 1925 Mr Geoffrey Oulton secured a scholarship at Hereford Cathedral School, he was previously a pupil at the Church School, Abertillery.

In October 1927 Mr Wilfred Ewart Oulton won an examination with a three year scholarship at the Technical College, Cardiff. He had previously been a pupil at the Intermediate School, Abertillery.

In 1934 Mr Geoffrey Oulton was the proprietor of the “Ace Of Spades” Motor Garage, Gladstone Street, Abertillery.

Upon leaving school Mr Wilfred Ewart Oulton trained for the Royal Air Force at Cranwell, became a flying officer and was later based in Malta.

As stated the Oulton family moved into the Clyn Mawr Ganol in about 1936.

The Later Years.
The Clyn Mawr Ganol was reconstructed at some point and occupied up until the 1960’s when it fell into disrepair and was eventually demolished and rebuilt as a Nursing Home called Grosvenor Nursing Home. It was later renamed Penybont Care Home.