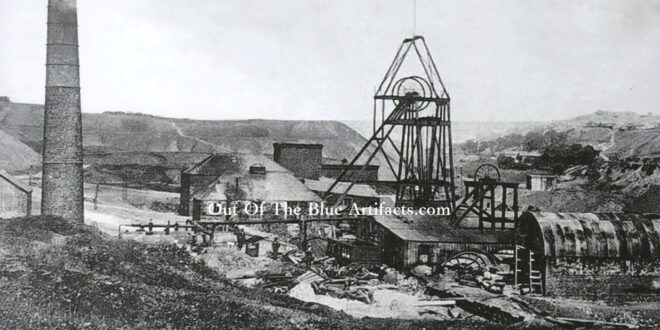 Coalbrookvale.
The name of Coalbrookvale was an English derivation of Nant-y-glo, stream of coal, Coal Brook in the vale of.

Coalbrookvale Colliery.
The Coalbrookvale Deep Pit was sunk sometime after 1840, (the colliery was not on the 1840 tithe map), the colliery must have been sunk under the ownership of Mr Thomas Llewellyn Brewer as Mr George Brewer had retired in 1839. In later reports of the 1880’s the colliery was still known locally as “Brewers Deep Mine”.

Mr George Highfield.
In 1889 Mr Daniel Lewis finished working at the Coalbrookvale Colliery to work for the Lancaster Company at the Cwmtillery and Rose Heyworth Collieries as general manager and resided at Lake Villa’s, Cwmtillery. The new manager at the Coalbrookvale Colliery was Mr George Highfield. Mr Highfield was only at the colliery for a short while and retired the following year.

The Coalbrookvale Wages Agreement.
In 1894 a wages agreement was written up and the prices paid were as follows – For cutting coal 1s. 5d. per ton. For double timbering 11d. The hauliers wage was 3s. 5d. per day.

Nantyglo and Blaina Iron Co.
In October 1903 the Coalbrookvale Collieries were put up for auction. They were purchased by the Nantyglo Iron Co for £3,000. The property purchased was 122 acres, which included 2 collieries, Coalbrookvale House, garden and cottage etc, railway connections and sidings along with the Old Yard Pit with a winding capacity of 300 tons per day.

In January 1916 the partnership of Messrs Hallet and Dixon was liquidated.

In March 1918 the Coalbrookvale Colliery was put up for auction.

In November 1920 it was announced that Mr Sylvanus Jones Jnr of the Woodlands, Blaina and his brother-in-law Mr T. L. Davies a county school teacher, had left the town for a sea voyage for the benefit of their health. They went to Australia and in March 1921 sent a message back to say they were on the return route home. It also stated that the brothers were in charge of the collieries in his absence.

In August 1921 the colliery closed again, though in the November it had re-opened after wage negotiations and employed 200 men. Over the next few years the colliery became idle on many occasions.

In October 1925 Mr Sylvanus Jones went Bankrupt. At this time he was living in Brongain, Stow Park Crescent, Newport, Monmouthshire.

Mr Alfred Tudgay.
On Friday 6th January 1928 Mr Alfred Tudgay of the Garn, Nantyglo, partner in the new company was working in the shaft of the old flooded up-cast shaft removing old pipework, he had been attached to a rope and descended the shaft by a winch. For some unknown reason the winch malfunctioned and Mr Tudgay dropped 300 feet to the bottom of the shaft. Mr Reginald Collett, a former pit-man was at the scene and at once arranged to descend the shaft to aid Mr Tudgay. Mr Collett tried in vain on several occasions but his safety lamp kept going out, he later tried with an electric light but had to come back up the shaft as the air was foul and no rescue could be attempted.

The following Monday the services of a professional diver was called for and Mr James Douglas from Cardiff, his two brothers and his son-in-law arrived at Coalbrookvale. They descended the shaft and reached the water level 20 feet from the bottom of the pit, they sunk through the water to pit bottom, though there was no sign of Mr Tudgay. Upon their ascent they found the body of Mr Tudgay 9′ feet below the surface of the water level in the shaft, he had been caught up in girder work and old guide ropes. At the inquest Mr R. Collett, pit-man was commended for his actions and risking his own life in trying to rescue Mr Tudgay. Thanks were given to the Ebbw Vale Steel, Iron and Coal Company in supplying the rescue equipment.

The Later Years.
I am not sure what date the Coalbrookvale Colliery closed though in the late 1930’s the Coalbrookvale area along with parts of North Blaina was in need of renovation and upgrading, many houses were deemed inhabitable by the council and a clearance scheme was put into action. Many properties were demolished and the land was cleared. A few miners and their families travelled north to find work in the northern coalfields.