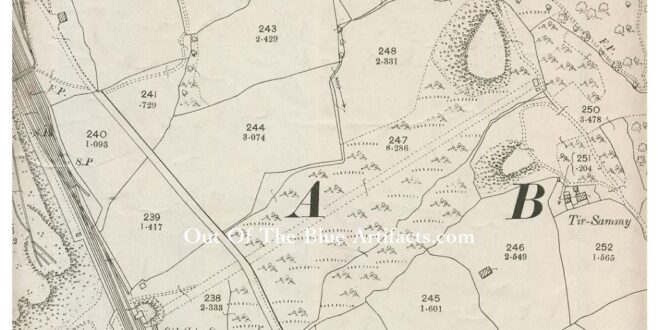 Coed Cae Tillery Coal Levels.
These coal levels were situated on the western side of Mynydd James mountain on the eastern side of the valley overlooking Rose Heyworth Colliery, they are some of the oldest coal workings in the area. They were numbered 1 and 2.

Mr Matthew Habakkuk.
Opened in the 1850’s by Mr Matthew Habakkuk, on land leased by Mr J. Bailey Esq. The levels covered an area of 240 acres and had twelve coke ovens, capable of producing sixty tons of coke per week. The coke ovens were situated at the bottom of the tramway at the side of the railway, close to where the public footpath is down behind where the Millennium School, Roseheyworth is today. This tramway was known locally as the “Ginney”.

The Abertillery Tin Works were opened in 1846 and was using coke from Blaina transported down the Monmouthshire Railway through to Abertillery.

Mr William Habakkuk was also in a partnership with Mr Charles Henry James as coal proprietors and coal merchants under the firm known as Messrs Habakkuk and James, this partnership was dissolved on the 5th April 1864.

Messrs J. Jones & Co.
The Coed Cae Tillery Collieries were sold in 1864 and purchased by Mr J Jones & Co, though a court case in the late 1870’s showed that the “Co” in the “Mr J. Jones and Co” was actually no-one, Mr Jones was sole proprietor of the coal levels though wanted it to look as though he had partners and added the word company.

Mr P. S. Phillips.
In 1880 the Coed Cae Tillery Coal Levels were listed as being owned by Mr Phillip Samuel Phillips. (Capt P. S. Phillips had earlier become the proprietor of the Abertillery Tin Works in 1872 and later the Blaina Works).

In November 1891 the Coed Cae Tillery Colliery Company was formed and took over the levels at Rose Heyworth.

In 1892 the Company invited tenders (as seen in the ad left) to open a new coal level, though in May 1895 the Coed Cae Tillery Co was subject to a winding up order. I can’t find them listed after this date.

The Later Years.
On the 1901 maps they were marked as disused.

Point of interest – The Ty Sammy’s farm (as seen far right on the featured map) was situated 120 metres directly behind 58 Attlee Avenue, Roseheyworth.

Mr Matthew Habakkuk was a coal agent, mining engineer and coal level owner and in 1846 took a major part in the sinking of the Penybont Tillery Colliery, Cwmtillery for its owners Messrs T. P. & D. Price of Brecon.