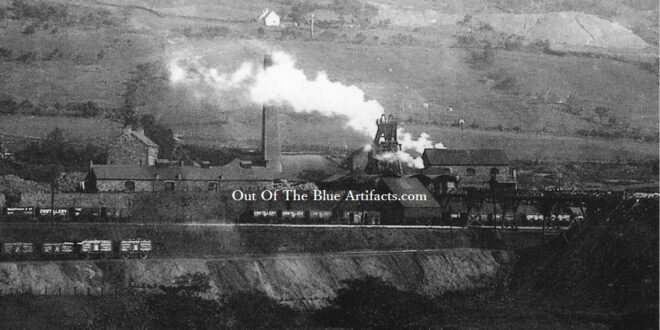 Coed Cae Tillery Coal Levels.
The image shows the Coed Cae Tillery Levels and waste tip (top of the photograph). The tramway from the levels came down the “Ginney” and on down to the main tram line and coke ovens close to where the Rose Heyworth Millennium School is today.

Points of interest – The image shows the Rose Heyworth Colliery from Old Blaina Road. The colliery has the original wooden headgear. The waste from the colliery went over a bridge spanning the railway line to the original waste tip as seen on the image far right. 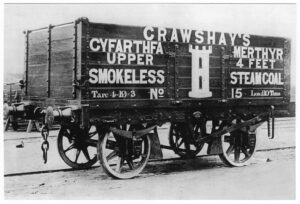 Also on the image are coal wagons in the sidings. There are Cwmtillery coal wagons seen and to the left what looks like Crawshay’s of Cyfarthfa Merthyr wagons, the design is of a round tower in the centre of the wagon (as seen in the image left).

In 1893 there was a report in the South Wales Gazette that stated the miners from the Rose Heyworth Colliery turned up for work for the day shift and spotted strange wagons in the sidings, their markings were not known to colliers. The men refused to go underground and walked out, they did not go to work that day and told management that they would remain from work until the offending trucks were removed. The Lancaster Company removed the wagons and the men went to work the following morning.