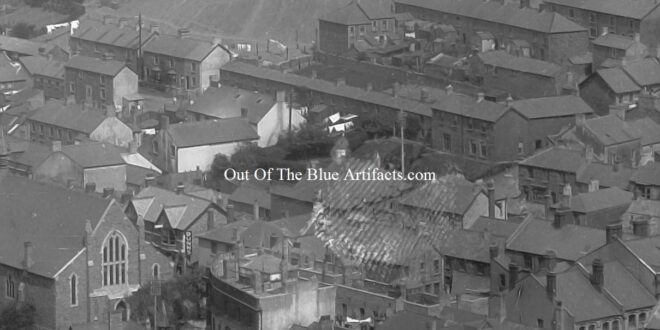 Messrs Williams.
Coed Iorwg is the large double fronted house in its own grounds sited on High Street where the Abertillery multi-storey car park would later be built. The house can be seen (centre-right on the main featured image above). The premises was partly covered in creeping ivy and was used as the backdrop of many sports team photographs in the early 1900’s.

The two premises at Abertillery the Limes House and Coed Iorwg were connected by Dr John Jones Williams a surgeon, born 1814 and his wife Mrs Ann Williams nee Edwards from Ty Isha, Risca, born 1819. The story began when Ann Edwards the daughter of William and Mary Edwards who was from a well to do family was orphaned at a young age and went to live at Bassaleg, Newport, Monmouthshire.

In 1841 she married Dr John Jones Williams and moved to Llanhilleth to live at Cwm Court and set up a surgery in the village. They owned quite a bit of land in Llanhilleth and became very affluent.

In 1857 Dr John Jones Williams purchased 1,200 square yards of land at Abertillery from Messrs Webb’s with the intention of building a property, I believe this land was obtained to build Coed Iorwg House. In the 1859 Slaters Directory of Monmouthshire, Dr John Jones Williams was a registered surgeon at Abertillery. He may have had Coed Iorwg House built as a surgery and was operating between Abertillery and Llanhilleth?

On the 1861 Census Mr and Mrs Williams were registered as still living at Cwm Court, Llanhilleth and had two children, Masters William Edwin Williams and Edmund James Williams.

In 1865 Dr John Jones Williams and his wife Ann moved up to Abertillery with their family and Dr J. J. Williams became the official Medical Doctor, surgeon for Abertillery and lived at Abertillery House.

In 1873 Dr William’s son – Dr William Edwin Williams F.R.C.S. worked along side his father at Abertillery in the medical profession and in the same year he became the Medical Doctor at Abertillery. In 1875 he took the role of Medical Officer for Abertillery. In the 1880’s William Edwin Williams became a J.P. and in November 1893 he became the Medical Officer for the Bedwellty Board of Guardians taking over from Dr Soper of Blaina.

Mr George B. Hammond.
On the 1891 census Mr George B. Hammond a manager at the Abertillery Tin Works was living in a premises at No.30 High Street, Abertillery known as Ivy House, he lived their with his wife Jane Hammond and children Florence May, Gladys Maud, Anne Elizabeth and George Edwin Williams. Also living at the address were Misses Elizabeth Parfitt (Servant); Kate Driscoll (Nurse) and Elizabeth Austin (Cook):

Ty Clyd was at one time the home of Mr William Hiley a business man from Abertillery. Even though Dr Williams and his wife left the area he remained J.P. and still took a great deal of interest in the welfare of the people of the town, he commuted to Abertillery from his home in Govilon a few times per week.

The Death of Mrs Ann Williams.
In November 1899 Mrs Ann Williams sadly passed away at her residence Coed Iorwg House, High Street, Abertillery. She was taken to Llanfrechfa near Caerleon and buried with her husband John in the family grave.

Between 1915 and 1942 I don’t know what happened at Coed Iorwg, I’m not sure if it had residents or if the house remained empty? There was no mention of it in any local papers until the second world war.

Coed Iorwg as a Hostel.
In 1942 the Monmouthshire Education Department invited applications for a resident superintendent and matron for the hostel called Coed Iorwg, Abertillery. The hostel provided accommodation for 30 difficult boys aged between 11 and 14 years of age.

Coed Iorwg Gardens.
In August 1963 Mr Len Hill, secretary of the Abertillery Divisional Labour Party proposed a plan for the site of Coed Iorwg to be turned into an open space and public gardens and were toying with the idea of constructing boating and paddling pools though the authority had already offered the site to the Monmouthshire County Council for an old peoples home and were awaiting news of their proposals.

A Central Car Park.
In July 1963 a multi-storey car park was first proposed by Mr Ron Baker of the Abertillery Council, Mr Baker planned for its construction in the valley just north of the Foundry Bridge, it was suggested that the Tillery Brook be piped and the valley filled in for the car parks construction. Besides the plan being very expensive the N.C.B. who owned the land stated the intended to dump waste in the Tillery Valley as far down as town taking in the land proposed to be used as a car park the the Coal Board did not intend to buy land to dump colliery waste when they already had land. The scheme was called off.

Coed Iorwg Car Park.
The building of the main car park at Coed Iorwg, Abertillery is a little confusing as it seems to have been constructed in different stages over a period of time. Though what I have found is detailed below.

In November 1964 plans were put forth for a multi-storey car park on the Coed Iorwg site Abertillery. This would provide accommodation for at least 200 cars. This scheme seemed to have been shelved.

In June 1965 the Abertillery Council’s Roads and Bridges Committee planned to meet representatives of a company who planned to build a two-tier car park on the site of Coed Iorwg at Abertillery. The car park would hold 126 cars and a coffee bar and restaurant would be included.

In May 1965 the newspapers were receiving letters from residents asking when the council would provide a car park for the town.

In July 1967 a car park had been built though it did not seem to have been a multi-storey as proposed though built on two levels. The newspaper reported on the towns peoples concerns over parking problems. Mr A. J. Rawlings the president of the Abertillery Chamber of Trade heard that tradespeople and professionals were parking their cars in the car park all day and evening and leaving visitors throughout the day with nowhere to park.

The Chamber of Trade suggested that the top tier be reserved for regular users on a payment of an annual fee of 3 to 5 guineas and the lower tier be charged at 6d. for the first two hours and doubled for each period there after. The clerk of the council refused and said that the Coed Iorwg car park was a public car park and spaces could not be reserved.

In December 1968 it was announced that the Abertillery Council would obtain a loan of £22,000 for a two-storey car park scheme on Coed Iorwg. The council said the two-story car park would be built over the existing car park doubling its capacity.

The New Multi Storey Car Park.
In September 2013 it was announced that a new state of the art multi-story car park was to be constructed in place of the old car park at Abertillery. The new car park would be more user friendly and have spaces for 114 cars, a lift and stairwell and have CCTV surveillance. The old car park was demolished in 2014 and work on the new construction began a few weeks later.

Notes of Interest – Coed Iorwg is roughly translated in English as trees of ivy. Coed (Trees) and Iorwg (Ivy).