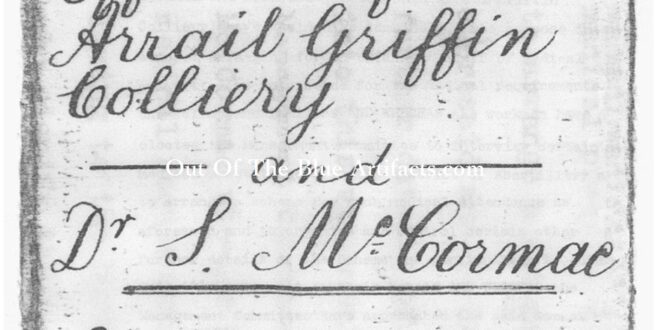 In May 1899 Dr T. Muir resigned from his post as chief surgeon and his place was covered by Dr Abernethy and Dr W. G. Sargent. Dr Muir finished on health grounds, he was advised to leave Abertillery as the climate was too damp!

In April 1900 Dr Abernethy resigned from his post in the Arael Griffin Colliery and the Powell’s Tillery Colliery and returned to London.

Dr Rocyn Jones was born in 1872 in Rhymney, (the son of a Bone-Setter) educated in Pengam, Blackwood, South Wales and attended college at Cardiff, Edinburgh and Oxford. He initially worked as medical officer at the Cambrian Collieries, Clydach Vale. Dr T. D. Sullivan studied at Edinburgh.

The Areas Covered by the Doctors.
Dr Rocyn Jones would treat the patients from the Six Bells Colliery up to town and Dr Sullivan would treat those living from the colliery down to, and including parts of Aberbeeg.

Nurse Evans.
In 1902 in response to the inactivity of the council in getting a district hospital established in the area, doctors Jones and Sullivan proposed to employ a nurse at the colliery to help with the medical care. They appointed Nurse Evans, though in October 1903 a job opportunity came up at Carmarthen, South Wales and she handed in her notice at Six Bells Colliery to go there.

In October 1904 Nurse Evans, like Miss George, only lasted a short while and she left the colliery. Within a week the doctors once again advertised the vacancy.

Dr J. D. O’Sullivan.
From 1913 through to 1916 Dr J. D. O’Sullivan was the resident doctor at the Six Bells Colliery and Aberbeeg. The workforce at the Arael Griffin Collieries were paying 2d. in the £1 for the doctors services at this time.

Dr Samuel McCormac.
On the 17th April 1917 Dr Samuel McCormac was the Arael Griffin Collieries Doctor. (the image above) is a scan of the original agreement between the workmen, officials and the doctor. It states that Dr McCormac lived at Church St, Abertillery and that he had entered into an agreement to supply the medical requirements of those workmen and their families.

The terms and conditions included in the agreement were as follows –
1/ His area was to attend those living north of Hill Street.
2/ He would attend lying-in-cases of the workers wives when a mid-wife was required.
3/ To render first-aid at the Arael Griffin Colliery when required.
4/ To attend consultation with other doctors on the committee.
5/ To provide the very best quality of drugs, ie parrish’s food, cod liver oil, castor oil and linseed meal.
6/ To attend free of charge – (a) to all widows or families of former workmen. (b) To widows and families where a son was a former patient. (c) To all relatives of workmen who might be taken ill while staying in the house of a workman patient.
8/ That the management committee shall deduct the sum of £3 per centum for the expenses of the working of this scheme.
9/ To continue to attend to the families of the management committee succeed in their application to become an approved society under the National Insurance Act.

And that the Management Committee agree to –
1/ To take a census of the workmen employed at the colliery every six months.
2/ To pay Dr Samuel McCormac twopence in the pound of every pound earned by the workmen who have signified their intention at the time of the census to become his patient.

Dr Burns.
In March 1923 the doctor at the Arael Griffin Colliery was Dr Burns.