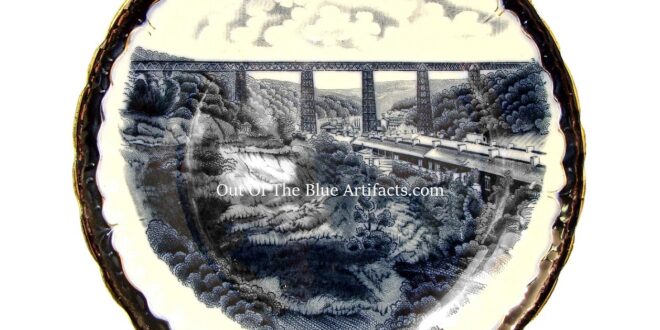 In the early 1900’s Messrs Briggs & Co Booters opened a branch at 19 Somerset Street, Abertillery. The company leased a shop in Messrs Wilkins Coffee Tavern, the Temperance Hotel premises from a Mr George Jones who previously had a boot shop in the  building. Mr Jones had closed his business due to lack of trade and the shop was leased to Messrs Briggs & Co in April 1906 for £100 per annum, equivalent to £11,577,88p in today’s money. It was stated that the trade was about £10 per week in takings, equivalent to £1,157,79p in today’s money. The district manager was Mr Edwin John Vranch.

The Commemorative Plate.
In about 1907 the Briggs & Company Booters had commemorative plates produced to give away free to customers in all their shops nation wide. In Wales they were produced in a set of at least four, with different images, there were plates printed with Cardiff Castle, Tredegar Clock, the Dual Bridge at Pontypridd and the Crumlin Viaduct (as seen), each plate was a blue & white print with a gold trim, size 9″ inches in diameter and issued free with goods purchased at their stores.

The plates had an ink-stamp of the name of the store impressed onto the back (as seen in the image left).