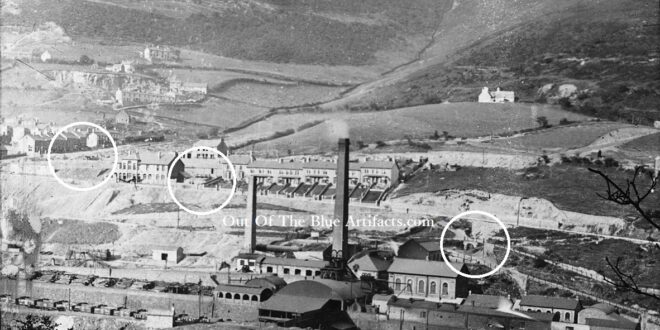 Cwm Farm Levels.
There were a few coal levels in the Cwm Farm area though I haven’t got any pin-point exact locations only maps with very few details. The featured photograph shows (circled) the areas of the three known levels on the map.

In about 1880 the coal level was owned by Mr W. B. Harrison, St Julians, Abertillery.

The entrance to the Jubilee Level was somewhere close to where the junction of Cwm Cottage Road and Earl Street is today, the waste was dumped just close to the entrance and formed waste tips. These tips were later flattened and spread out to enable the building of the Queen Street School and the forming of the Jubilee Field opposite. The Jubilee Field later became known as Judd’s Field when the Cwm Hotel was built, (named after the landlord Mr C. J. Judd). Many shows and fetes where held on this field though it was later purchased for the building of the Abertillery Drill Hall.

The Vivian Trial Level.
This small level was situated a little further south close to where the Vivian St – Alexandra Road junction is today, it was in production before the Vivian Colliery was sunk and later got consumed by the colliery out-buildings. The above image shows the level entrance just behind the colliery winding house.

Unknown Trial Level.
On the 1880’s maps there was a small unknown level situated directly on the site where the Cwm Hotel was built. It must have closed when the new hotel was planned and Alexandra Road was excavated and laid down in the early 1900’s.