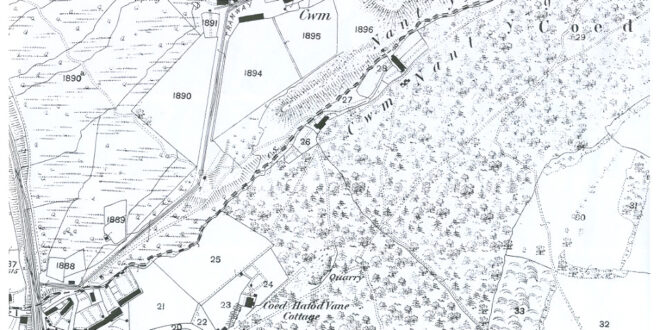 Cwm Nant-y-Groes Coal Level.
Situated up in the Cwm-Nant-y Groes area of Six Bells, the colliery is featured on the 1843 map of the coalfield as being in production and had a tramway to the main tram road at Six Bells.

Messrs T. P. & D. Price.
The coal level was opened by Messrs T. P. & D. Price. Mr Thomas Protheroe Price and Mr David Price were brothers, coal owners and merchants of Brecon and original owners of the Penybont Tillery Colliery in the 1840’s. The news item (as seen above) is from October 1857 and proof they were the early owners the Cwm Nant-y-Groes Levels at Six Bells. 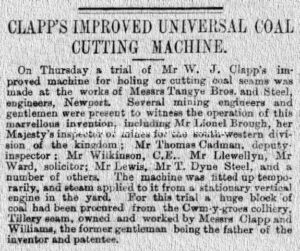 The Coal Cutting Machine.
At this colliery on Thursday 9th March 1876, Mr W. J. Clapp (son of the owner of Mr Clapp & Co) tested a new coal cutting machine that he had invented. The machine was made in the workshops of Messrs Tangye Bros & Steel, engineers of Newport and used at Cwm Nant-y-Groes Colliery to demonstrate its use in front of many invited guests, they included – Mr Lionel Brough (Inspector of Mines); Mr Thomas Cadman (Deputy Inspector); Mr T. Dyne Steel (Partner in the Company of Tangye Bros & Steel); Mr Wilkinson C.E.; Mr Llewellyn; Mr Ward (Solicitor); Mr Lewis and others: Also present were the representatives from the Powell Duffryn Coal Company.

Description of the Coal Cutting Machine.
The coal cutting machine was propelled by steam on rails and featured a series of borers placed horizontally in a frame, the borers would drill a number of holes into the bottom of the coal face taking 6 to 7 minutes then moved forward to bore another batch of holes and so-on, the colliers would come behind and wedge out the blocks of coal. During the experimental cut the machine bored out a block of coal 6’ft 2″ins long, 3’ft 8″ins wide by 2’ft 2″ins thick and weighing 1 ton 13cwt. There was criticism of the size of the machine, it was considered too bulky to use in many smaller collieries.

Messrs Clapp & Co.
In February 1883 Messrs Clapp and Williams partnership was officially dissolved. Though in 1896 the Cwm Nant-y-Groes Colliery was still under the ownership of Messrs Clapp & Co, there were twenty-four men employed below ground and six on the surface.

Mr William Gay.
In 1908 Mr William Gay of 19 New Princess Street Abertillery was the owner and there were just six men employed below ground with none on the surface.

In 1918 the Cwm Nant-y-Groes Colliery was not listed.

The Cwm Nant-y-Groes Colliery Tramway.
The tramway from the Cwm Nant-y-Groes Colliery came across the side of the mountain north-west towards the Cwm Farm area to the White House – which was originally an engine house for the colliery. The trams of coal were dropped down the incline which is now where Coronation Road and Eastville Road is today and down to the railway above the Coach & Horses Inn. The inn at this time was set back against the railway about where the subway is today.

In the 1870’s the railway company wanted to widen the railway up through the valley from a single track to a double one to accommodate the increase in traffic. The Coach & Horses Inn was demolished to make way for this expansion and rebuilt on the side of the river bank where it is today. 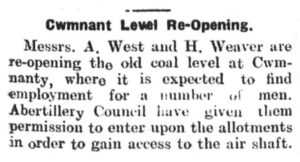 The waste from this level was dumped close to the levels in the valley, later the tips were flattened, levelled and made into the sports fields.