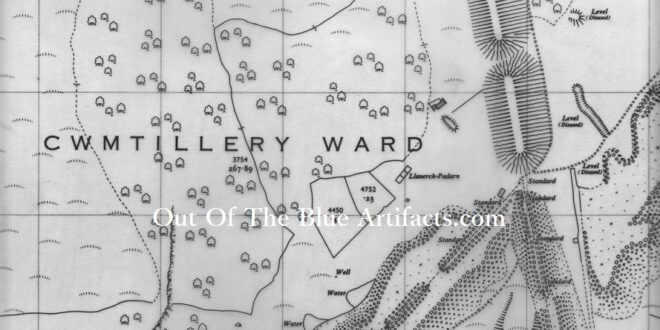 Cwmtillery Colliery Aerial Ropeway – Mid Section.
The map shows the mid-section of the old route. The standards on the old route were later dismantled when the rope-way was turned and the new tip started in the late 1920’s. The waste was tipped at various places en-route resulting in the valley being covered in waste from the collieries and many levels in that area.

Points of Interest – The cottages at Llanerch Padern (centre) can be seen, later demolished and also the Llanerch Padern Coal Level (right of centre) closed in the 1950’s was a large concern and was owned by the South Wales Colliery Company, J. Lancaster & Co and later taken over by the N.C.B. The entrance to the level is still open as the National Coal Board are using it to drain and monitor the water contained in the mountain.