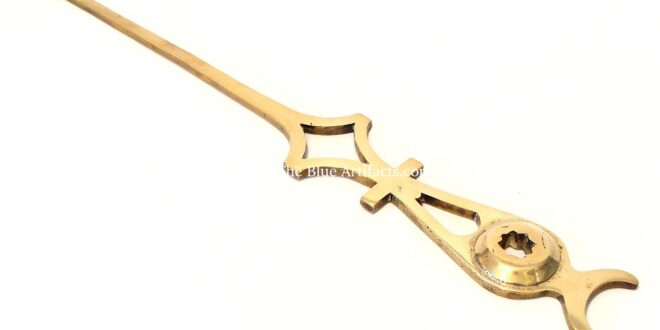 Cwmtillery Colliery Steam Winder Indicator.
This brass hand was used to indicate the position of the cages in the shaft during winding. This indicator hand is from Cwmtillery Colliery, Abertillery. These brass indicator hands were taken from the colliery when the steam winding engines were replaced with electrical winders sometime in the 1940’s or 1950’s. There were two winders in Cwmtillery so there is another one of these hands out there somewhere, I believe each engine maker had their own design indicator hands.

Mackworth v Brown and the Indicator Hands.
On Saturday 11th of July 1857, there was a case “Mackworth v Brown” where her Majesty’s Inspector of Mines Mr Herbert Mackworth Esq opened a case against Mr Thomas Brown Esq of the then Ebbw Vale Collieries, in connection with a number of breaches of safety at his mines concerning engine winding practices. On a visit to Mr Browns collieries Mr Mackworth noticed no breaks on the engines and no geared mechanical indicators in use to show the position of the carriages in the shafts.

Mr Mackworth heard how the winding engine men preferred to operate the machines like this and that the procedure was easier, the rope was marked with a tuft of material or a strap of leather nailed to it to show the positions of the cages top and bottom as the ropes were in their direct line of sight at all times, if a mechanical indicator was on a marker board (sort of clock-face) this would require the engine man to take his eyes of the rope and winder to check the descent and ascent, which could be distracting. Mr Mackworth was also told how the proper controlled use of the steam would control the engines better than a break. Mr Mackworth could not allow these illegal practises and stated the immediate use of breaks and the installation and use of mechanical winder indicators.