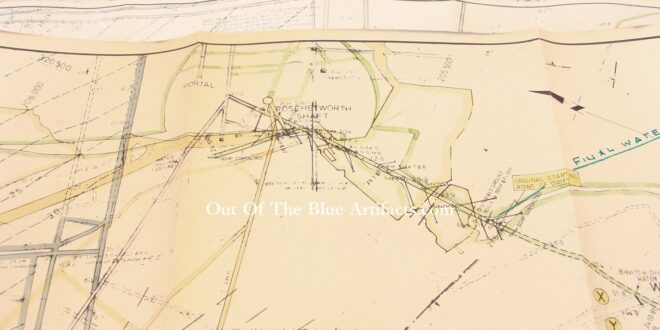 They decided to open a Dewatering Drivage, a tunnel from Rose Heyworth Colliery towards Six Bells under the Abertillery Park area with which to bore a series of holes with long distance blast borers at all angles and in different directions down through the Dewatering Drivage to locate the source or sources of water and to drain these pockets of water using pumps to bring the water to the surface and then to discharge it into the river.

The Installation.
The Dewatering Drivage was planned to head south, it started close to the back end of the East-West Cable Belt, it was begun manually for a few yards until it was safe to start blasting as it was so close to the cable belt, the Garw manriding belt-head and transfer points. Once the heading was started, an Eimco bucket and stage loader was installed with all machinery. Supplies to the heading were taken from pit bottom, up the slip road on 2 flat bogies pulled by the small Pickrose engine, onto the east-west roadway and down into the heading. The stage loader emptied the waste onto the cable belt.

After it had advanced about 30 yards it was becoming close to pit-bottom and care was taken not to disturb the area close to the shaft. A few yards past pit bottom work was halted to make a slip-road up to the back of the pit-bottom for the access to supplies, this slip road was all done by hand as it was only metres away from the shaft. A few weeks later it was back to advancing the Dewatering Drivage, it was advanced a further 20 yards where a permanent conveyor belt head and structure was built in place of the stage loader, an engine house was installed just a few metres down the heading and equipped with an electric haulage engine with one single rope drum (drop-down and pull-up). Another 20 yards and a junction was made for a cross cut which would later be made across to the Garw manrider road. Rails were installed from pit bottom and a “Manchester Gate” (a tram rail safety barrier) was installed, all of the supplies dropped down from pit bottom in drams, they were unloaded and reloaded onto the bogies in use in the Dewatering Drivage, these special bogies were flat with removable hollow tube side bars so they could be used for all purposes.

Once all the obstacles had been passed it was all ready for the Dewatering Drivage to advance. Owing to the nature of the drivage (to locate water) all the electrical transformers were placed upon wheeled frame-works and all the electric cables (Jumbo and Armoured) that powered the transformers were slung on lengths of mono-rail, if a breakthrough of water occurred all the electrical panels and transformers etc had to be connected to the haulage rope and pulled out of the heading clear of any flood water. Lengths of 8″ inch water pipes were installed for the pump out if water was found, everything was planned ready for the possible evacuation and draining of the heading. Also as the Dewatering Drivage was one way in one way out there was no air flow so the air was supplied via a 2′ foot vinyl ribbed airbag the full length of the drivage.

The Dewatering Drivage advanced about 2 yards every 24 hours, though on average 12 yards per week. There were three gangs of development men, working days, afternoons and night shift. There three men per gang with three supply men, two of which working days and the other overlapping working 10.00am til 5.00pm. (bacon and egg shift). The typical 24 hour period included – Day shift boring a full round of 40 holes; Afternoon shift firing and clearing; Night shift ring-up and lag, perhaps start boring. This cycle would overlap and each gang would do various jobs while advancing through the week.

The Long Distance Boring Procedure.
After about two weeks the colliery long distance boring team came to the Dewatering Drivage and set up their boring rig, it was a bit archaic and powered by blast-air. The operation started by boring a 4″ inch hole about 4′ foot long into the side of the heading. A four-inch cast iron pipe with a shut-off valve was cemented into the hole and left to dry, once dry the borer would start to bore the hole up through the pipe and open-valve, if water was located they would withdraw the borer and close the valve to control the flow ready for pumping. This procedure was repeated at different places and angles down through the heading. After a while water had still not been found, all boreholes were dry. There was water there somewhere! A few hundred yards down water started to come through the top, it was like working in a rain storm. It got so bad that a vast amount of corrugated zinc sheets were ordered and had to be placed behind the rings to stop the water from dripping everywhere. The conditions was like this for close on 100 yards, then below that the drivage dried up.

The Huge Fall of 1982.
Further on down in late 1982 there was a fall, a huge mass of rubble came from the top, it bent the rings and the horse-head girders. The horse-head girders were bent to a 90 degree angle from the excessive weight, luckily no one was injured. After the heading was deemed safe, the stage loader was started and they began to clear the rubble, though this went on and on, the mass of rubble kept falling. We were told by the surveyors that the unstable ground had was the old workings from the South Griffin Colliery that had been worked in about 1917. Among the objects to fall were old water pipes, one with a tap attached and also a length of round timber sized about 12′ foot long by 14″ inches in diameter, the timber was notched each end and had carvings etched into it, the timber was solid and weighty and was longer that the length of three flat bogies.

The rubble still kept coming and both loader and conveyor were running 24 hours a day for 3 days before it settled. At one point we joked that “We would have to look out for grass and a rugby ball” as we were under Abertillery Park. For those 3 days we had spent all our time supplying the heading with 4′ foot timbers and cog blocks ready for timbering the hole. I know this may sound silly but I had the privilege to stand under that hole and look up into the void, it was about 10′ feet in diameter and so high you could not see the top. The hole was finally secured, ringed up below and timbered as high as physically possible to make it safe.

The Inrush of Water.
In the winter of 1982 there was still no sign of any water and the management were getting concerned as to how the surveyors could be so wrong and why old maps showed water but still nothing? I vividly recall how one afternoon shift I was carrying timbers into the heading and while watching one of the gang boring through the seam of coal with a 6′ foot twist drill, a crack appeared straight down through the seam fracturing the heading through the hole and as the boring machine was withdrawn, a huge quantity of water gushed out. The rock face cracked further and within minutes the whole heading was full of water, the stage loader was half covered, we were close on a mile down with only one way out, it was scary, some of us readied the electrical withdrawal and others manned the submersible pumps though the raise of the water got to a high point and levelled off. Once the panic subsided the water was being pumped out steadily though it did take a few days to clear. During this time the bad snows of 1982 set in and a lot of men were snowed in, as I lived opposite the colliery I was only one of a few who made it into work the day after the Dewatering Drivage was flooded and I had to go and watch the pumps, make sure the filters were kept clear, kept immersed and that they were kept in good working condition.

A few months later the Dewatering Drivage got as far as it could get, and turned north-west back towards the Garw seams of G50 and G60.

Points of interest – On the Maps in the featured image above (a set of original N.C.B. plans of the De-Watering Drivage) the drivage can be seen going diagonally from top left to bottom right and the bore holes are marked in short thick black lines radiating at various angles from the tunnel.