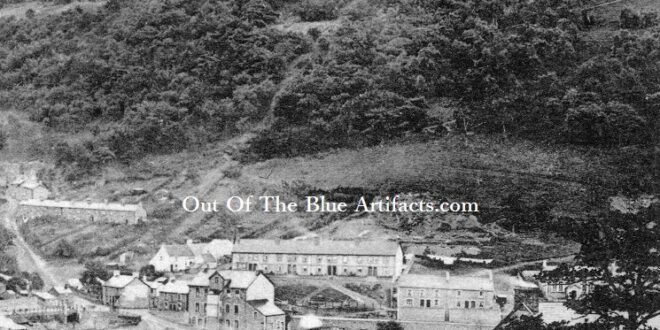 Durban Level.
This coal level was situated on the western brow of the Pentre Parc Mountain, Brynhithel, overlooking Six Bells.

The level was listed as operational in 1880 but not listed after.

The tram road came down the mountain into Six Bells village and under the road near the old Post Office at Browns Corner and down to the railway for transport by rail. The waste was brought down the same tramway but diverted over the main line by a small rail-bridge and dumped on the ground where the Six Bells Colliery outbuildings and baths would later be built. A part of this waste tip was actually removed to build the Bathany Chapel.

The image above shows the level waste tips on the top of the mountain, the tramway, also the newly built Six Bells Hotel erected by Noel Bagley in 1892. Nestled under the Black bridge to take waste over the railway line from the levels is the old Six Bells Inn besides a little row of cottages, now the site of an old age pensioners home.

Points of Interest – As to why this coal level was named Durban Level is a bit of a mystery, though in the late 1830’s and early 1840’s and later the Boers clashed with the British over control of the port town of Durban, South Africa. The British were victorious and in 1854 Durban became a borough town. The proprietors of the Durban Level could have developed the level at this time and may well have named the level in remembrance of the conflicts and this occasion.