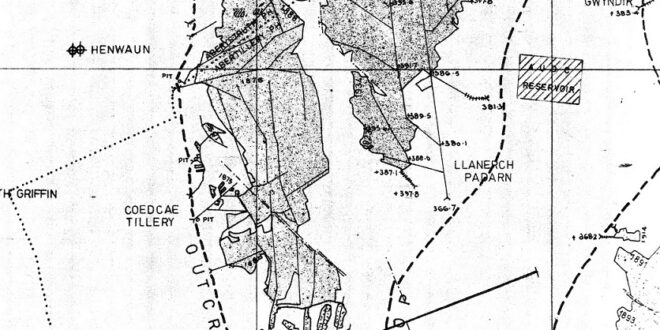 The Court Application to Mine Coal.
The application was opposed by the Lancaster Steam Collieries Ltd and the Nantyglo and Blaina Ironworks Company Ltd. The applicants also wanted the right to use land belonging to the Nantyglo Company for constructing an incline to carry coal down to the Great Western Railway. The grant for these facilities had been refused by the persons who had power to grant them.

Mr St John Micklethwait for the applicants said they had an agreement for a lease to work the coal and wanted facilities to enable them to do so. They wanted to mine the coal on the out crop and take it down an incline and across land owned by the Nantyglo Company and use the land of the Great Western Railway. The real opponents of the application were the Lancaster Co who took up the attitude “You are poachers, you came to the valley to mine coal which is our reserves, we don’t want you here”. Mr Mickleswait argued the unemployment in the area and this application may alleviate the problem and the applicants should be granted rights to mine it.

Sir Arthur Colefax K.C. for the Lancaster Co said the red ash should be worked by the same people who works the steam coal as there was a threat of disturbing the natural water table. Engineers for the Lancaster Company said there was a possibility that working this level would endanger their deep pits – Rose Heyworth and Cwmtillery Collieries in each valley and expose them to problems with water and flooding. Mr C. E. Forestier Walker mining engineer of Cardiff said “The red ash seam could be worked well in the way proposed by the applicants”. He thought it was in the public interest that the two seams should not be in the same hands.

The hearing went on for a few days and Mr George Barker M.P. gave evidence in support of the application, spoke of the rising unemployment in the area and stated there had been seven mines closed down by the Ebbw Vale Co and the seam had not been fully mined. Further arguments were heard, Sir William Galloway mining engineer spoke in favour of the applicants, Mr Charles Edwards M.P. spoke in favour and Mr Rabagliati for the Lancaster Co and Sir Richard Redmayne mining engineer and former chief inspector of mines was in the opinion that those working the minerals below should also work those above.

Coal Royalties.
The question of royalties arose and Messrs J. & C. Jenkins were offering to pay 8s. 6d. per ton and Mr Mickleswait told them that was too high. He called attention to a lease under which the Lancaster Co let coal to Messrs Gilson & Bennett at a royalty of only 1s. 3d per ton.

The Draining of the Water from the Mountain.
After an adjournment of a few days the court heard that Sir Arthur Colefax for the Lancaster Company said he was willing to withdraw their opposition on condition that Messrs Jenkins took an under-lease of Messrs Lancaster’s 109 acres on the same conditions as in the lease of the underlying minerals. The rent was to be £380 and the royalties were 10d. on large coal and 5d. on small coal. Also Messrs Jenkins were to drive an under-level drift from Blaina to Cwmtillery to drain water from the seams. A minimum rent of £400 was to be charged for the railway. The rights to mine coal were granted on condition Mr Jenkins drove a tunnel through the Mynydd James into the Cwmtillery valley and pump water out into the Tylery Brook.

It was the intention of Messrs Jenkins to drive two levels, have a bank head, narrow-gauge incline and screens on the Blaina side of the coal level.

In June 1925 the levels had been driven ready and the tramlines laid, it was reported that the screens were being built at this time.

The Bargoed Coal Company.
In August 1929 the coal level was taken over by the Bargoed Coal Company under the supervision of Mr G. Pullen-William M.E. The new company modernised the level and widened the gauge of the incline to accommodate larger trucks to convey the coal to Coalbrookvale for transport by the G.W.R. and the L.M.S. Railway Companies. They also introduced compressed air and electrical machinery into the coal level.

The Closure of the Coal Level.
I am not too sure of its closure date. (More information to come).

Points of interest – The map shows the red ash coal seam beneath the Mynydd James mountain and the various levels that worked it from – Rosemont, Coed Cae Tillery, East Blaina and Llanerch Padern. The East Blaina level workings and what seems to be the drift driven from Blaina to Blaentillery at the very top of the map. The Bottle Pit featured, is the Lower Deep. The Cwmtillery – Roseheyworth Drift can also be seen going through the mountain.

This is a portion of an official Coal Board map.