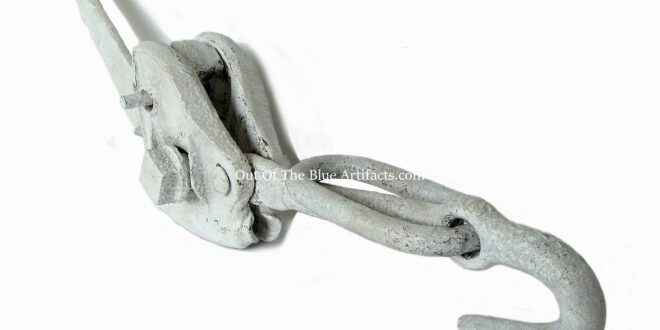 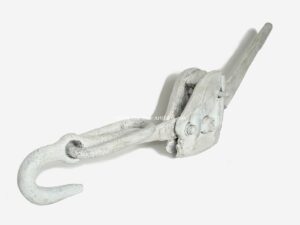 Endless Haulage Rope Clip.
Made from iron. Size of the clamp box is 8″ x 6″ x 4″ inches, overall length including the hook and handle is 32″ inches long.

These clips were used to connect the drams to the haulage ropes (back and front) for transport below ground. I actually used clips like these on fifteen-dram journey’s in the back roads of the Garw at Rose Heyworth Colliery in 1978-79 and found them awful to use, they should have been outlawed. The three outside haulage engines were main and tail blast compressed air engines, though as we went further into the workings the inside haulage engine was changed from a main and tail blast to a powerful electric endless engine.

The old blast engine drums would only hold so much rope so limiting the distance you could take a journey into the ever expanding workings. The electric endless engines had just one drum with three loops of rope being tensioned by the return wheel in the back of the workings. This technique enabled the splicers to add more rope without taking up space on the drum, therefore “endless”.

Attaching a journey to an endless from blast was done by means of the butterfly shackle. When in position over the change-over point you would have to attach the clip to the rope, which was fed under the sleepers, hook the clip to the butterfly and pull in a few inches to tension the journey to enable the removal of the blast engine rope shackle. When the shackle was removed you would pull in the full length of the journey which was about 75′ feet to tension the whole journey along all shackles and attach the back rope clip in the same way.

From this point you would be at the mercy of a rope clip holding a full fifteen-dram journey weighing approximately 15 tons. When the journey came off-road the rope clip would catch in the sleepers and with the electric endless being so powerful it just pulled the rope though the front clip causing the back clip to drag the journey together into a sort of concertina effect causing no end of damage and making the situation very dangerous to the journeymen. You just could not control a journey with an endless electric engine and rope clips as easy as with a main and tail blast engine and old shackles. 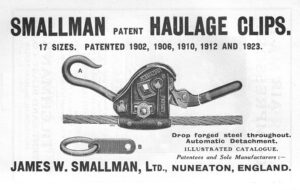 The main rope clip manufacturer was Smallman – James W. Smallman of Nuneaton, England. The clip in my collection has no makers name or number to pin-point its makers.