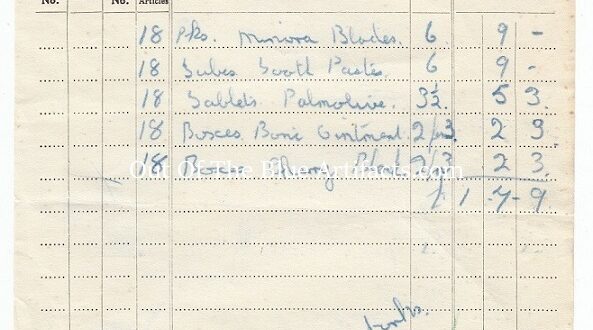 The Abertillery Store.
In the 1930’s the F. W. Woolworth Co informed the council of their intention to build a store in Abertillery, the site at Somerset Street was chosen.

In April 1931 Messrs F. W. Woolworth Co finally built a store at Nos.39-47 Somerset Street Abertillery, it was a late addition to such a large town but the depression in the area delayed its construction by many years. The store was opened on Friday 24th April for inspection only.

On Saturday 25th April 1931 the store at Abertillery was officially opened for business. The premises occupied the ground floor of 45,000 square feet with approximately 500 square feet of counter space. It was reported that all staff with the exception of the manager were all appointed locally. The firm also took a keen interest in the employees and provided a rest room and dining room. The residential manager was Mr A. Smith.

At the time of opening the Abertillery store was one of 450 branches of F. W. Woolworth’s Stores in Great Britain.

The Woolworth’s Store was closed in the mid 1960’s and moved to a much larger newly constructed building on High Street, Abertillery. The old premises at Somerset Street were taken over by Woodhouse Furnishers.