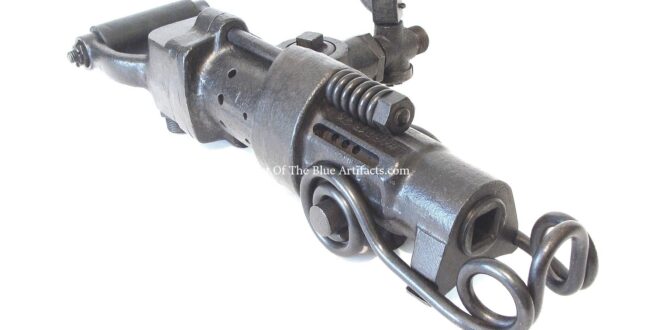 Made from iron and spring steel with a rubber handle. Size 21″ x 7″ inches. Weight 18kgs.

This Borer is featured in the Hardy’s 1953 tool catalogue listed as – Simplex Hammer Drill for wet or dry drilling.

The Hardy firm was founded in 1870 and set up by Mr Charles Attwood Hardy and Mr Augustus Edward Stayner. The firm became a public limited company under the name of the Hardy Patent Pick Company Limited under the chairmanship of the mining engineer Mr Emerson Bainbridge.

In the 1930’s the name of the company was changed to Hardypick Limited owing to the fact that many clients had the impression that the company only made picks. The company had set out to make picks but developed other lines of manufacture of mining, railway, contractors etc tools. Later compressed air drilling, wire rope cutting machinery etc and became pioneers of the mining tools and mining machinery.