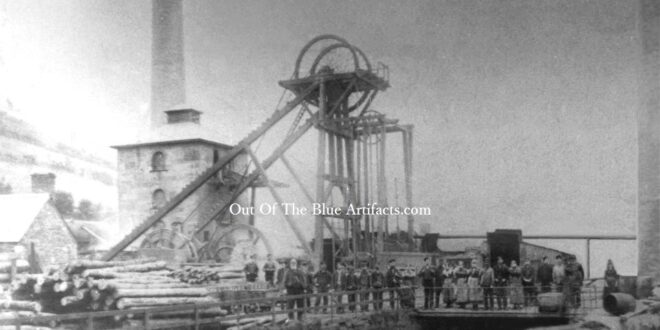 Messrs J. & C. Bailey.
The colliery was located on the eastern side of the Blaina valley on Mynydd James between Blaina and Bournville. Opened by Messrs Crawshay and Joseph Bailey, sometime in the early 1850’s it was later owned by their company the Blaina Works then Nantyglo and Blaina Company and was later leased by Levick & Simpson who leased the Henwain Estate.

Messrs J. Lancaster & Co.
In 1877 this colliery along with a few other Blaina pits were put out to be leased and was later taken over by the Lancaster Co in March 1878.

Waste was tipped on site and the coal was transported to Blaina through the Lower Deep Colliery via locomotives that travelled between the two collieries along the surface.

The Henwain Colliery was later connected below ground to the South Griffin Colliery N02 and became the downcast for ventilation, also the second way out.

The Closure of the Colliery.
The Henwain Colliery closed in February 1921.

Points of Interest – On the image can be seen the chimney of the ventilation shaft (far right). The winder is open – not enclosed and the flat rope winding drum is visible. To the right of the winder is the huge Cornish beam pump and pump house. In the foreground are the coal wagons on the loop circuit from the Lower Deep Colliery, Blaina.