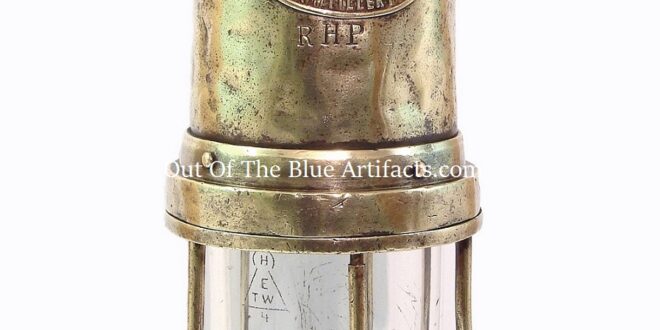 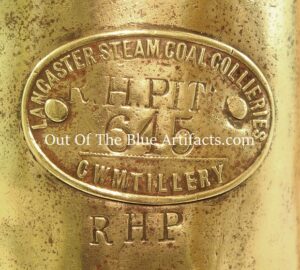 The Rose Heyworth Colliery Lamp.
This lamp is of the “lockable” design, to stop the miner opening it underground. It has the sliding 5th false pillar to lock the bonnet and it also has the stamp of the “Three Feathers” above the name plaque.

This lamp (seen in the featured image above and left) is from the Rose Heyworth Pit, stamped R. H. PIT 645 on the plaque and also along the base holding the pillars. Size is 9″ x 3 1/2″ inches. Made from Brass and Iron.

In July 1888 the company gained control of the Rose Heyworth and Cwmtillery Collieries under the name of Lancaster & Spier. Spier was a Lancaster family member and was only involved with the company for a short while before Lancaster took full control of both collieries. They had the Lake Villa’s built for the managers and had lamps produced for their own pits, No1 & No2, (the 3rd shaft was just for ventilation) and also Rose Heyworth Colliery lamps.

The company later sunk the Six Bells Griffin No4 & No5.

In 1892 the Lancaster Co opened the brickworks in Blaina and started producing their own bricks.