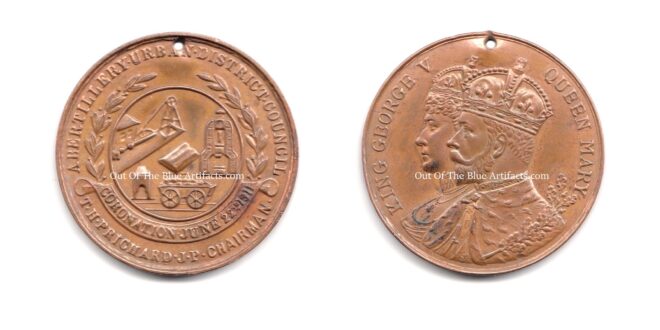 The Coronation of King George V.
On Thursday June 22nd 1911 King George V and his Consort Queen Mary were crowned at Westminster Abbey. The Archbishop of Canterbury Dr Davidson and the Archbishop of York Dr Lang assisted by bishops and clergy, officiated at the service.

On a local level preparations had been made for celebrating the event.

Abertillery.
At Abertillery the South Wales Gazette reported – Most of the businesses and private homes were highly decorated with flags, banners and bunting, tradesmen vied in friendly and loyal rivalry and made sure nothing was to be left undone to promote the gaiety of the day.

Mr T. H. Prichard J.P., and the Chairman of the Abertillery District Council threw himself into the arrangements and was loyally supported by members of the council, the officials, head teachers, assistant teachers and others. The District Council provided £200 and it was decided to organise a procession, to read an announcement of the Proclamation, to give tea to the children in all the day schools, to hold children’s sports and to issue a medal to all the children and a new shilling to all the old age pensioners and aged paupers. Messrs W. Gait clerk to the District Council and Mr N. J. Llewellyn secretary to the Education Committee were joint secretaries to the committee entrusted with the arrangements. The sports for the children were arranged to be held at the Abertillery Park, Gelli Crug Recreation Ground, Arael Flat and Llanerch Padarn Field at Cwmtillery.

The Procession.
The procession was arranged to start at 12.30pm from the council offices, though shortly before that the weather took a turn for the worse and it was decided to cancel the procession and the children’s sports and to just give the children their medals and tea in various schools used for the occasion. The younger children were given an orange and some sweets. Messengers were despatched in all directions to announce the postponements but it was too late as a large crowd had already gathered at the post office and many criticisms were levelled at the decision to postpone the general procession and the announcement of the Proclamation. The council stated the authorities were right in cancelling the children’s procession because of the atrocious weather conditions.

At 1.00pm the weather cleared up and and several people approached the chairman of the council with a view to make the announcement of the Proclamation. At 2.30pm Mr T. H. Prichard took the platform supported by members and officials of the council, the vicar Rev H. S. Rees and other ministers of religion and others. Mr Pritchard explained to the crowds of his decision not to expose the many children to a severe drenching and then having them remain in the damp clothing for many hours then the vicar read specially appointed prayers for the King and Queen after which he led in the recital of the Lords Prayer. The chairman then read in clear and resonant tones the announcement of the Proclamation.

After the Proclamation councillor George Jones, ex-chairman of the council led in the singing of the National Anthem, followed by three cheers for King George and Queen Mary. The proceedings concluded with the chairman announcing that the postponed procession and children’s sports would probably be held on Investiture Day, July 13th 1911. The Proclamation was read in every school by the head teachers, as mentioned the children were given tea at their schools and also a medal.

The Medals.
The medals were made from bronze one and a half inch in diameter and were stamped with the following – On the obverse side were the effigies of King George and Queen Mary. On the reverse side was a copy of the seal of the Abertillery Council with the superscription – “Abertillery Urban District Council” “Mr T. H. Prichard, J.P., Chairman. Coronation Medal June 22nd 1911.

I cannot yet find any details on the makers or costs of the Abertillery Coronation Medal although there were quite a bit of information on the other councils medals that were to be issued as seen below.

The Risca Council accepted the tender of Messrs Gaunt and Son of Birmingham, their Coronation Medal was to have been made of bronze, hung by a red white and blue ribbon from a clasp of bronze, the cost being 24 shillings per gross and 40 shillings extra for the die of the council offices. It was later reported that the contract for the medals could not be completed as of time limitations and the council referred back to the tender of Mr J. E. Hancock of Risca who had quoted 27 shillings per gross for a complete medal of hard yellow metal with the King and Queen’s profile on one side and a special die of the Risca Council Offices on the other. The ribbon was white capped with a shield and the letters “G.R.” in red, white and blue colours. Three-thousand of these medals were made for the Risca Council.

The Abercarn District Council opted for the tender of Mr S. Kneales of Crumlin for five-thousand medals at a price of 22 shillings per gross.

The Investiture.
On Thursday 13th July 1911 Prince Edward K.G., was invested Prince of Wales and Earl of Chester at Caernarvon Castle. Their Majesties the King and Queen with the Prince of Wales and other members of the Royal Family arrived at Holyhead on Wednesday evening from Ireland.

Local Festivities.
At Abertillery practically all the shops were shut, the Cwmtillery and Rose Heyworth Colliery were idle although the Powells Tillery and the Arrael Griffin Collieries were working as normal. The county intermediate school and all the elementary schools were closed. Some of the businesses were decorated but there were no local events to celebrate the occasion. It was noted that a large number of people spent the day at the seaside and down Gilwern Valley. The children’s sports that were postponed on Coronation Day on account of the bad weather and rearranged for this day were postponed again until Friday 14th July 1911.

Points of Interest – The £200 that the council donated for the Coronation Day activities at Abertillery is equivalent to £23,749.50p in today’s money.

Most of the other towns in the valley that celebrated the Coronation Day and later the Investiture included – Brynmawr, Blaina, Abercarn, Risca Crosskeys and Newbridge.