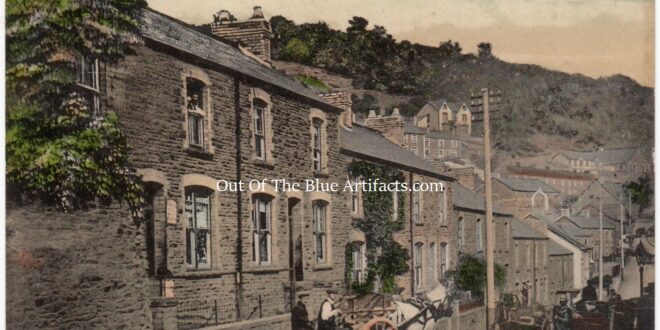 The chairman put forth arguments that a club, run on strict Conservative lines, was greatly needed in the district and hoped that one would be established at Llanhilleth very soon. Mr W. P. Rumsey told how he had been in a conversation with a gentleman who owned two houses on the main road who would be prepared to make the necessary alterations and also build a billiard room if necessary, also he was willing to lease the properties or even sell them. He pointed out the gentleman’s name was Mr David Lewis, a local builder. He was also negotiating with Mr W. J. Everett the solicitor of Pontypool. It was reported that the premises were worth about £500 and the alterations would cost about £600. The population of Llanhilleth at this time was 7,000 and the proposed club would serve three polling districts.

Mr F. W. James of Six Bells stated he had been associated with several clubs and he moved that the new club at Llanhilleth should be called “The Conservative and Unionist Club”. This was seconded by Mr G. Sainsbury and carried unanimously.

Mr A. H. Wilkins (of the Conservative Central Office) suggested the owners of the building be a Limited Liability Company who would let it to the Conservative Club Committee. It was suggested that it would be a subscription club and they would secure 100 subscribers and would strive to get life and energy in to the movement. It was said Llanhilleth and Six Bells had been neglected in the past and he had been connected with many clubs in the past and could not see any obstacles preventing them having a a sound organisation at Llanhilleth.

Mr George Sainsbury suggested a sub-committee be formed and to be comprised of twelve members, all of whom had to be members of the North Monmouthshire Conservative Association. He hoped that they would bring in the colliery owners and colliery workmen. The sub-committee consisted of the following – Mr F. W. Pratt; Mr J. H. Bond; Mr E. Harris; Mr F. W. James; Mr G. Sainsbury; Mr James Challenger; Mr B. C. Phillips; Mr T. J. Davies; Mr S. Deacon and Mr F. Wall:

In 1913 Mr W. W. Phillpots became the secretary at the Conservative Club, Mr Bert Phillips was the vice-secretary.

The Male Voice Choir.
In September 1922 it was reported that a Male Voice Choir had been formed at the Conservative Club. The practice sessions were on Sunday mornings and over 30 gentlemen were present including Mr Capel Thomas the well-known local tenor. The Chairman was Mr Sam Kingston (Chairman of the Club Committee) and the Secretary was Mr George Sainsbury. The Choir Conductor was Mr Bryn Thomas with Mr Ivor Parsons as the accompanist.

The Purchase of the Club and Extension.
In April 1925 it was announced that the Conservative Club premises had been purchased from the owners by the committee for the sum of £1,000. It was also reported that improvements were to take place which would include the making of a suitable underground cellar and to also extend the concert room back to Upper Court Terrace, this would make the club larger to be able to increase the membership. Work started on the enlargement of the building in late November 1925. The work was completed in the March at a cost of £2,000.

The Death of Mr Phillpots.
In August 1927 Mr W. W. Phillpots the club secretary passed away at 61 years of age. Mr Phillpots was a native of Birmingham living at Carlyle Street, Abertillery. He had for many years resided at Llanhilleth and had worked in the grocery department of the Co-operative Stores. Upon the death of Mr Phillpots a new secretary was balloted for. Mr Clifford E. Coles, Mr Percy Dixon, Mr John Griffiths, Mr W. Stephens and Mr George Sainsbury (Chairman) put their names forward. Mr Clifford E. Coles had the most votes and was given the secretaryship. Mr Coles was the son-in-law of Mr William Thayer of Pleasant View and was employed at the outfitting department of the Blaina Co-operative Stores at Abertillery.

In 1931 the Conservative Club was in the Monmouthshire Clubs League and some of the team were as follows – Mr George Jones; Mr Tom Thayer; Mr W. Eason; Mr B. Sainsbury; Mr J. E. Lewis; Mr Alf Donald and Mr A. Penn:

In February 1936 the Conservative Club balloted for the election of treasurer and committeemen. The gentlemen who stood for election were as follows – Mr Stephen Beddoe and Mr William J. Read, Mr Beddoe was elected. There were 16 candidates for the four seats on the committee, those elected were – Mr Ted Chivers; Mr Redvers Blanche; Mr J. Jayne and Mr H. Dean: Mr John Evans (Chairman) and Mr Clifford E. Coles (Secretary) were returned un-opposed.

Darts Club.
On Monday 19th April 1937 A meeting was held at the club with the intention to form a Darts Team. Mr Richard Jones presided at the meeting and Mr Clifford Morgan, one of the oldest players in the Llanhilleth district proposed that the Llanhilleth Conservative and Unionist Darts Club be formed, seconded and supported by Messrs Alf T. Mapp and Mr Wilfred T. Ware respectively. It was decided to run two teams and to enter the Abertillery and District Darts League. The following officers were elected – Mr Richard Jones (Chairman); Mr David J. Williams (Secretary): The committee – Mr T. Ware; Mr A. T. Mapp; Mr Clifford Morgan (Team Captain) Mr L. Jones and Mr Jim Collins:

Male Voice Party.
On Monday 17th October 1938 a meeting was held at the Conservative Club to propose the formation of a Male Voice Party. On the proposition of Mr Clifford Morgan and seconded by Mr Morgan Lewis it was unanimously agreed to start the venture. Officers and committee were elected, Mr William Challenger (Chairman); Mr Ernie Saunders (Secretary): The committee – Mr R. Larcombe; Mr C. Morgan; Mr A. Maggs; Mr A. Penn and Mr M. Lewis: It was reported that Mr Frank Watkins of Abertillery a former musical director of the Llanhilleth Illtyd Choral Society would be the conductor and Mr George Reed, pianist. In December 1938 it was stated that there were over 40 members enrolled into the Male Voice Party and that Mr Godfrey Gale of Llanhilleth had been appointed assistant pianist to Mr George Reed.

In 1940 the Llanhilleth Conservative Club had organised an Indoor Games Tournament with the Llanhilleth Institute, over 400 entries for the club and 600 for the institute took part in a series of events from billiards, snooker, dominoes, whist, darts, don and draughts.

Point of interest – At some point before the Great War, Mr Edward Frost was the Steward of the Conservative & Unionist Club though I cannot find a date of his stewardship?

Throughout his time in the army he became a very learned man and gained a 3rd Class Education Certificate in 1877 and a 2nd Class Certificate in 1882 and became sergeant. He obtained distinguished service medals in Zululand Natal, and Burma, also a long service and a Good Conduct Medal in 1889. After a long career in the British army he came to live in Llanhilleth with his wife Alice May and was the Steward of the Conservative Club.

At the outbreak of WWI he was put in charge of the recruiting office at Llanhilleth. His son Mr Alfred Frost joined up and was put into the 2nd Mons Regiment, he was sadly killed in action. After the war in 1918 Mr Frost came to live at 66 Gladstone Street, Abertillery.

In 1936 during the Kings visit to Abertillery King Edward’s route was through Gladstone St and Mr Frost got out of his bed through illness and insisted he dress in his Zulu Natal uniform and greet the King as he drives past, he did stand on the curb as the Royal entourage drove past but the King looked the other way. Mr Frost’s friends and relatives wrote a letter to Buckingham Palace to express their anger, though the King wasn’t aware of what he had done, or the upset he had caused and sent a letter of apology to the family.

Mr Frost sadly died on May 2nd 1938 aged 86 and was buried with full Military Honours at the new cemetery Brynithel. At the funeral his coffin was covered with the Union Flag and placed on top were his Medals, his (old pattern) Helmet, Belt and Side-Arms. Before his death he was the oldest ex-soldier in Abertillery.

The Conservative Club is still in existence to this day.