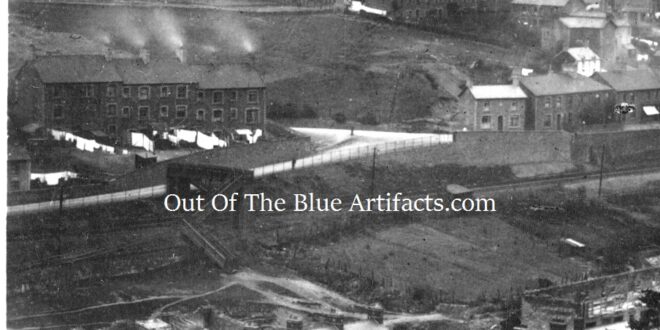 Points of interest – At the centre of the image can be seen the junction of Oak Street and the King’s Head area and the original Black Bridge over the railway line at a different place. At this time 1902-03 the bridge was placed further south behind Park View Terrace. It was later removed and another bridge was built 260 feet further north opposite and between No4 King’s Head Cottages and No4 Sudan Terrace.

Behind the bridge is an old row of houses which later included a post office and a shop. They were all demolished and the site is now a car park.

On the Oak Street junction is Baden Powell House and no other houses from there up to numbers 68-70 Oak Street close to Rutland House.

Behind Oak Street shows the completed houses on what was known as “Old” Gladstone Street and the land upon which the houses called The Grange and Sylverton would later be built. The road for the “New” Gladstone Street is laid out ready for the houses to be built from there up to the bottom of Ty Bryn Road.

In the background far side of the other valley the houses on Bishop Street can be seen being built. Bishop Street is laid out and on the same line (top right) the old buildings of the Rhiw Park Levels can be seen.

Finally, nearly every house has a line full of white linen drying in the breeze.