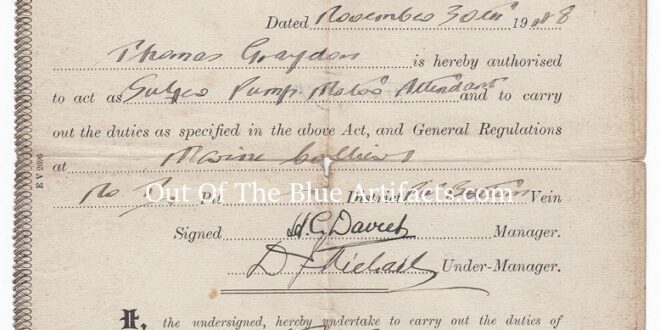 Marine Colliery Certificate.
A certificate of appointment of an officer under the Coal Mines Act of 1911, awarded to Mr Thomas Graydon to act as surface pumps motors attendant at the Marine Colliery, Cwm, Ebbw Vale.

This certificate issued by the N.C.B., was originally printed for the Ebbw Vale Steel, Iron & Coal Co Ltd, though struck-through and rubber stamped with National Coal Board. This was seen regularly as one company would run out of certificates and dockets etc and would very often use other companies paperwork and over-stamp it. In this case the N.C.B. which had been established on 1st January 1947 were using the old coal companies printed material.